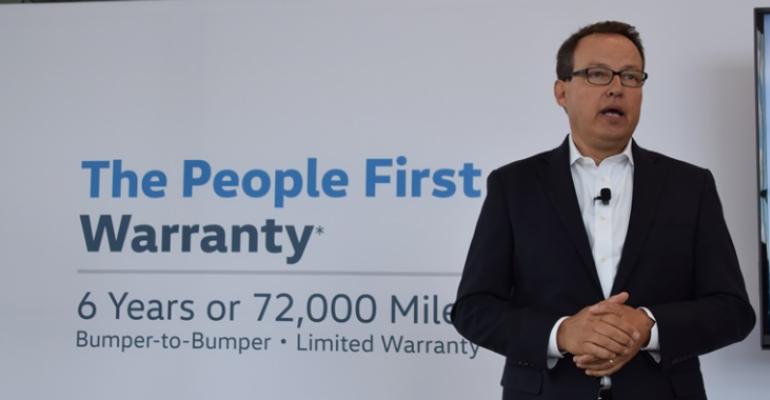 U.S. dealers balked at the Teramont name for the 3-row CUV. Also, VW announces new extended warranty, and Hinrich Woebcken says the automaker is moving beyond Dieselgate, is growing U.S. sales and is unconcerned with presidential tweets.

DEARBORN, MI – Volkswagen’s commitment to greater independence for regional decision-making around the world paid dividends in spring 2016 when its U.S. dealer council objected to the initial name of the all-new 3-row CUV to be built in Chattanooga, TN.

The name was Teramont, in fitting with the Touareg and Tiguan utility vehicles that had come before, but the dealers rolled their eyes at yet another T-based tongue twister. Meanwhile, the name Atlas was in consideration as well, and the dealers embraced it heartily, says Hinrich Woebcken, president and CEO of Volkswagen Group of America.

“So we changed it. We went back to headquarters and said we want a different name than the decided one. They were not amused,” Woebcken tells journalists at a VW event here.

The German automaker prefers global names for its vehicles, but management in Wolfsburg agreed it was a regional matter and allowed the change, even though tools and processes were in place for the Teramont name, which remains in place for the Chinese version of the ute.

“I was not aware how much I’m going to change shortly before the launch of the car,” Woebcken says with a smile. “But we did it. It shows Wolfsburg headquarters really are willing to let go.”

The change in direction results from top management reorganizing the North American region to assume responsibility for product development, engineering, purchasing, production and sales and marketing

“It’s changing how decisions are made. This new autonomy for our U.S. dealers allows us to make decisions affecting our business and the products we sell here,” he says from the showroom floor at LaFontaine Volkswagen here. “We are able to more quickly respond to what people and customers and dealers want.” VW has 652 U.S. dealers.

Woebcken was in metro Detroit this week to advance another regional initiative: an extended warranty for every Volkswagen vehicle for the ’18 model year just getting under way.

When the Atlas and all-new ’18 Tiguan launched earlier this year, both arrived with a six-year or 72,000-mile (115,870-km) bumper-to-bumper warranty that is fully transferrable if the vehicle changes owners.

Now, every ’18 model in VW’s lineup will fall under the People First warranty, which includes powertrain coverage for engines, transmissions and optional 4Motion all-wheel-drive systems. Until now, most VWs fell under a three-year or 36,000-mile (57,935-km) basic warranty.

“Volkswagen has begun to grow again in America, and buyers have welcomed the Atlas and Tiguan into their homes” Derrick Hatami, VWoA’s new executive vice president-sales and marketing, says in a statement.

“Expanding this warranty beyond those two models gives our dealers another compelling argument for the rest of our lineup, and we believe it will lead to a reduced overall cost of ownership for buyers,” Hatami says.

VW officials are thrilled with U.S. sales of the Atlas to date (8,136 units since arriving in May, according to WardsAuto data) and expect the Tiguan, which launched in July, will be one of its top sellers.

There is plenty of room for growth, as both models lag far behind high-volume players such as Ford, Honda, Chevrolet, Toyota and Nissan.

“We are now taking the volume players as our main competitors, and that’s a big shift for the brand,” Woebcken says. “In the past, we tried to charge a premium over competitors, which limited our growth.” Base price for the Atlas is a reasonable $30,500.

The product initiative will continue next year with the all-new ’19 Jetta compact sedan and Arteon all-wheel-drive larger sedan.

Woebcken says he is excited about VW’s pace of potential growth in the future, fueled by plans to introduce two all-new vehicles each year going forward, in addition to mid-cycle refreshes and facelifts.

“Our goal is not only to participate in the American market but to grow from a niche player to a truly relevant volume brand,” he tells journalists.

Volkswagen of America continues its bid to regain customer trust in the wake of Dieselgate, in which the automaker rigged diesel vehicles to cheat on emissions tests.

Woebcken say the automaker has bought back or fixed 67% of the affected diesel vehicles. Vehicles waiting to be fixed or crushed are stored in 30 lots around the country, including the Pontiac Silverdome in suburban Detroit.

He says the brand is successfully putting the issue in the past by introducing new vehicles.

“This country always loves the comeback story, right? That’s what American people love, and they love to give people a second chance. That’s exactly what we intend to do,” he says. “We feel we are on a very good path in this regard. Our recent sales numbers are kind of proving it.”

VW invested an additional $900 million in its Chattanooga plant for launch of the Atlas, and its assembly line has room for Atlas variants, perhaps a two-row version, which has been discussed.

Politically, the investments should satisfy President Trump, who has lashed out at automakers investing in Mexican operations.

Woebcken says VW employs 7,000 people in the U.S., and its suppliers and dealers account for an additional 120,000 jobs. “We believe we are a strong and good corporate citizen, and we will continue to do so,” he says.

VW also is a major player in the Mexican market, with a massive production complex in Puebla. Asked if VW can continue to invest in the Mexican operations without being subject to angry presidential tweets, Woebcken seems unconcerned.

“For the time being, we would rather have our focus on the U.S., simply because we want to grow in this country,” he says. “In general our investment decisions are not based on (presidential) administration cycles.” Instead VW’s future strategies tend to be geared more than seven years in the future, Woebcken says.