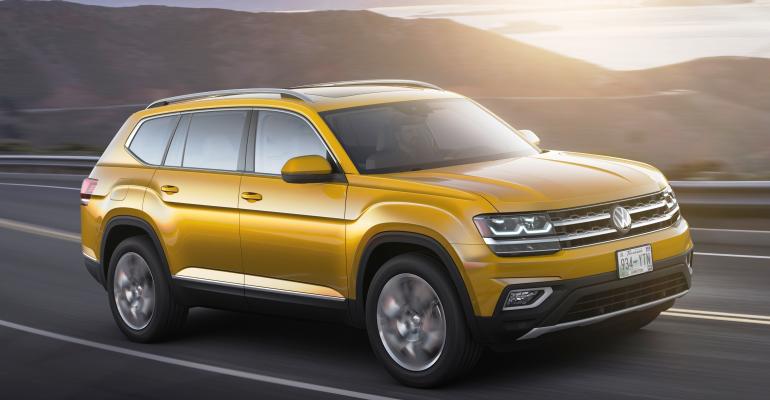 VW&rsquo;s U.S. product mix will shift from 10%-12% cross/utility vehicles now to about 40% over the next several years as the company launches all-new Atlas and Tiguan CUVs and keeps the smaller, existing Tiguan. &nbsp;

GENEVA – Volkswagen, the German automaker known mostly in the U.S. as a small-car company that sold diesels, is going to transform itself into a family-friendly SUV-oriented brand, VW’s top U.S. official tells reporters here.

Hinrich Woebcken, CEO-North American Region, also confirms VW no longer will sell diesel-powered vehicles in the U.S. and will focus instead on becoming a leading player in battery electric vehicles beginning in 2020. VW expects 1.5 million to 1.8 million BEVs to be sold annually in the U.S. by 2025. “We intend to have a nice share of this,” he says.

VW’s U.S. product mix will shift from 10%-12% CUVs now to about 40% over the next several years as the company launches all-new Atlas and Tiguan CUVs which both offer third-row seating and keeps the smaller, existing Tiguan as an entry-level model.

The automaker also is looking at launching another CUV derivative off the Atlas platform being built in Tennessee. The Touareg luxury SUV remains in the business plan, and the company also is expanding car offerings with enhanced cargo capacity and all-wheel-drive such as the Golf Alltrack.

“We are shifting the brand into a position where we will enjoy more business volume because we were not present in those segments, Woebcken says. “We’re currently at 12% and the industry is nearly 60% light trucks and SUVs, so we are severely underrepresented.”

VW also is changing its pricing structure to become more competitive in the utility segment. Historically it has tried to charge a premium over competitors, but Woebcken says that policy is dead. The Atlas will start at $30,000 even though there was speculation the base price would be $35,000. However, options will take the price up rapidly. A fully loaded V-6 AWD SEL Premium trim version will sticker at $48,000.

VW has only one body-on-frame architecture in its global portfolio, and it would not be feasible as the basis for a competitive U.S.-style pickup, Woebcken says. He also suggests there is little interest within VW in building a car-based pickup “lifestyle vehicle” along the lines of the Honda Ridgeline, which sells in comparatively small volumes.

Despite its enthusiasm over CUVs, VW is not giving up on sedans. It showed off the new Passat-based Arteon sedan at Geneva which will be the brand’s new luxury flagship. A new Jetta arrives next year and an all-new Passat in 2019.

“The sedan segment is not growing, but we can’t afford to bypass it. We saw a 40% sales increase in sedans last month,” Woebcken says.

The iconic Beetle also will remain in the lineup, even though sales are trailing off.

“This is typical with emotional products that peak early and then wind down. It is an emotional car, not a real family car so the numbers are limited,” he says. “But there still is a huge community out there that still loves the car. We’re going to continue bringing out special editions to keep that product fresh.”

He admits VW’s relationship with its dealer body has been tense but says things have improved greatly over the past 12 months. Much stronger sales in January and February have helped.

“We’ve managed to convince them over the year that we have a plan to build more product momentum and move into the sweet spots,” he says. “I’m very proud this important back bone of our business is in good shape.”