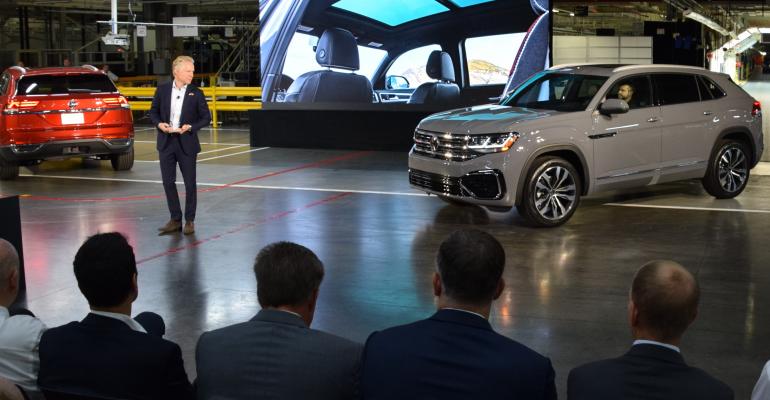 Tom Murphy
“This is our chance to introduce people driving these very sad vehicles from Toyota, Nissan, Subaru and everyone else” to a European option from Volkswagen, Scott Keogh says.
Industry News

The Atlas has done well competing among 3-row CUVs, and now the 2-row Atlas Cross Sport, launching at VW’s plant in Chattanooga, has a chance to make inroads among popular midsize utes.

CHATTANOOGA, TN – Eight years after the first Passat sedan rolled off the assembly line in Volkswagen’s all-new plant here, a third vehicle was revealed today that will go on sale in spring: a 2-row variant of the Atlas CUV that joined the lineup two years ago.

Both the 3-row Atlas and smaller 5-passenger ’20 Atlas Cross Sport spring from VW’s MQB architecture and will share the single assembly line here with the Passat, which is derived from the older PQ platform. An all-new second-generation Passat goes on sale early next year.

VW desperately needs the new Atlas Cross Sport to make inroads among midsize CUVs, America’s hottest vehicle segment. In the ’19 model year that just ended Sept. 30, the Middle CUV segment in the U.S. (based on Wards Intelligence segmentation) delivered an astounding 7.3 million vehicles, an increase of 2%.

VW’s only current vehicle in that sector, the new larger Tiguan, is gaining ground, with 189,233 sales in ’19, making it VW’s most popular vehicle in the U.S. Still, deliveries for the segment-leading Toyota RAV4 topped 800,000 units in ’19 and 14 other vehicles outsold the Tiguan as well.

Wolfsburg’s response is to double up the segment, using the Tiguan as the smaller entry in midsize CUVs and adding the ’20 Atlas Cross Sport at the larger end. The wheelbase for the Atlas Cross Sport is the same 117.3 ins. (2,979 mm) as in the 3-row Atlas, which overall is 2.8 ins. (710 mm) longer overall and 2.3 ins. (580 mm) taller than the Cross Sport. 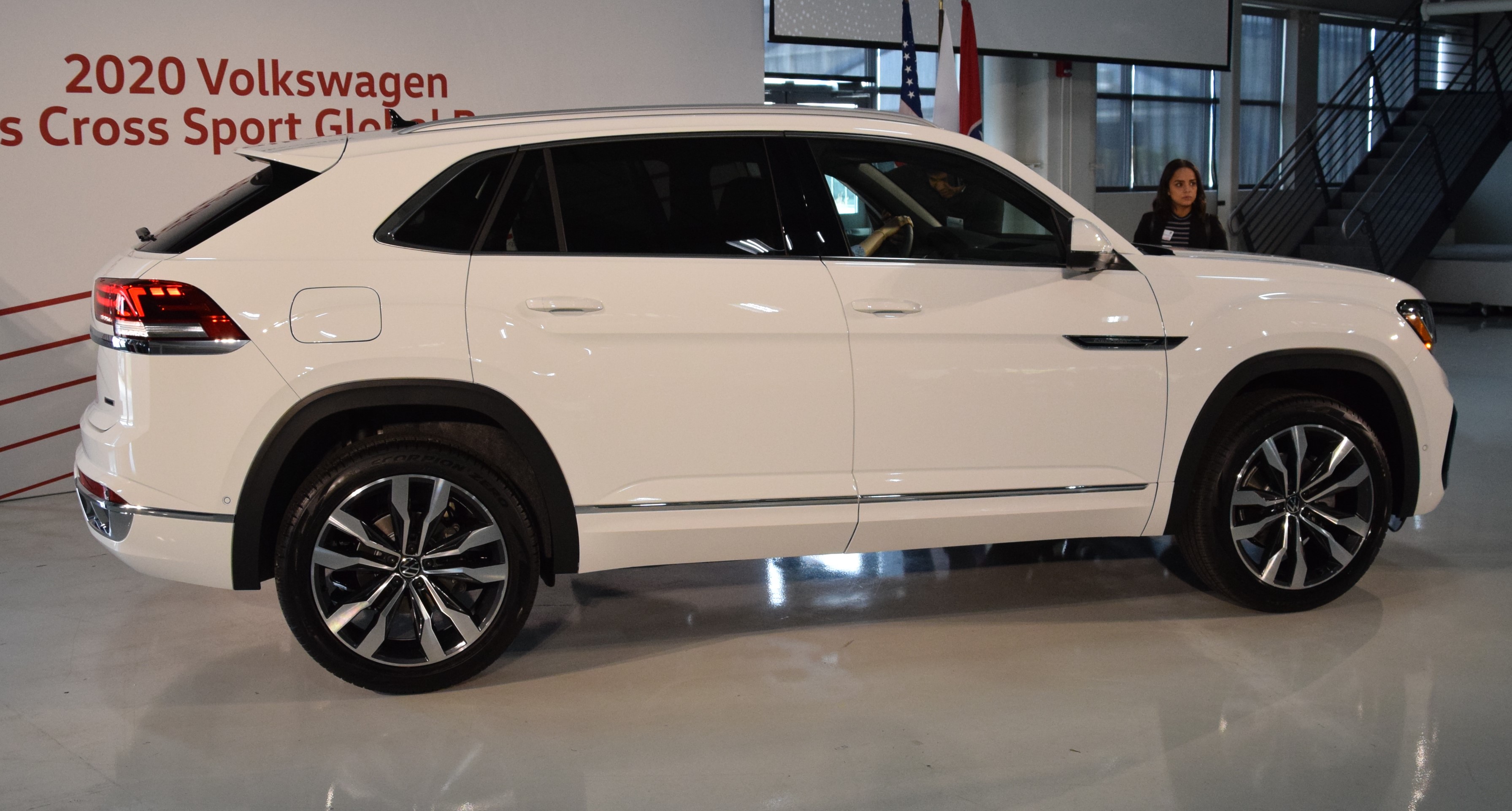 Volkswagen Group of America CEO Scott Keogh says the Atlas Cross Sport, with its generous proportions, will rival both the Jeep Grand Cherokee and Ford Edge. Respective sales in ’19 for those models were 469,399 and 272,892 units, according to Wards Intelligence data.

Keogh admits VW was caught unprepared for the runaway popularity of SUVs and car-based CUVs, but he says the brand is catching up with the market. In 2016, utility vehicles constituted only 14% of VW’s U.S. portfolio, but that figure has grown to 52% with the addition of the Atlas and Atlas Cross Sport.

He points to the success of the Atlas, saying 84% of customers buying the vehicle are conquested from other automakers, and he uses the opportunity to take a shot at brands selling at higher volumes than VW.

“This is our chance to introduce people driving these very sad vehicles from Toyota, Nissan, Subaru and everyone else” to a European option from Volkswagen, he says, drawing enthusiastic applause from the hundreds of plant employees gathered for today’s event.

Plus, the Atlas has boosted VW’s average transaction prices about $4,000, Keogh says.

Since launching at the plant here two years ago, VW has produced 210,000 Atlas CUVs, and he says units are exported to Canada, Mexico, Russia, the Middle East and other markets.

The Atlas is doing reasonably well, reaching 134,270 U.S. driveways in ’19, placing it fourth in Wards’ Large CUV segment, close behind the Honda Pilot and Nissan Pathfinder 3-row CUVs. The Chevrolet Traverse led the sector with 294,667 deliveries. 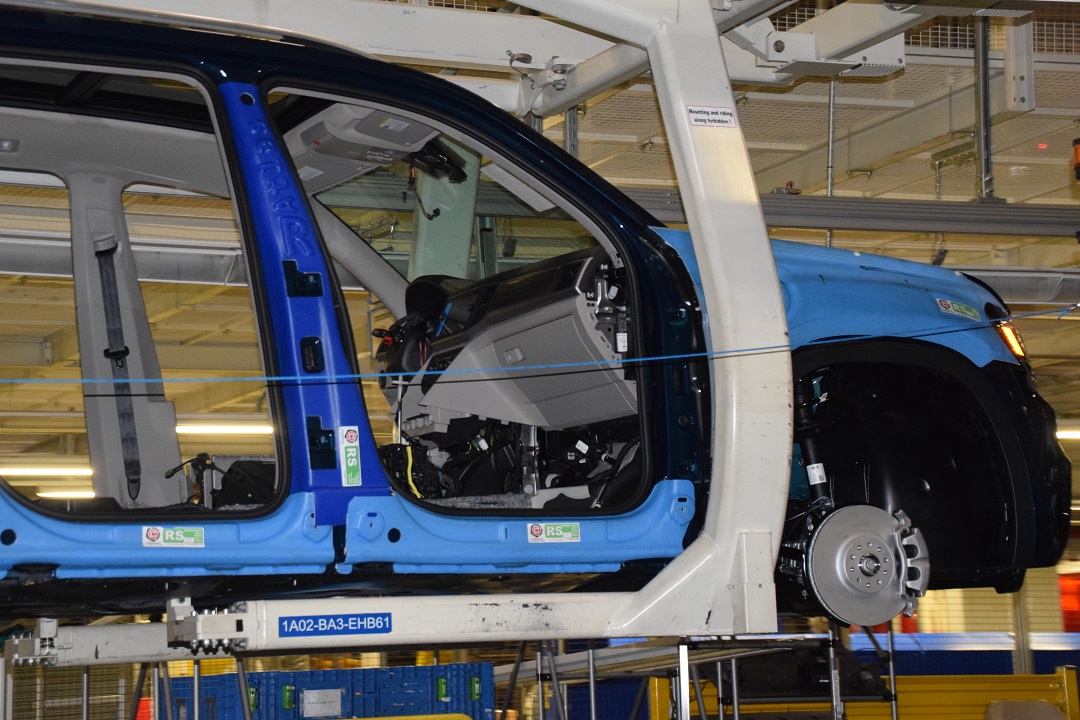 Keogh says he sees great potential for the new Atlas Cross Sport to likewise compete in the 2-row CUV segment with a profile that is “racier” than that of the Atlas, with a steeply raked rear pillar and liftgate. The rear bumper and lights have been redesigned rather than carrying over from the Atlas.

The upgrades extend also to the inside of the Atlas Cross Sport, with a new steering wheel, more intuitive controls and available stitching accents on the doors and seats and wireless phone charging.

Inside, the Volkswagen Digital Cockpit configurable instrument display is available on SEL and SEL Premium trim. The Volkswagen Car-Net suite of connected features is upgraded for ’20, with an updated mobile app, a long list of no-charge services for five years and new subscription options.

For instance, Car-Net Remote Access allows owners to interact with their vehicle from miles away via the mobile app. It is offered at no additional charge for five years from the date of vehicle purchase. Features include remote start and stop (if equipped) and remote door lock and unlock.

Volkswagen owners with factory-installed navigation can send destinations or points of interest directly to their car from the app. Later this year, owners will be able to connect their VW Car-Net account to compatible smart home devices to send voice commands to their vehicle to check the fuel level or remotely start the engine.

In addition to driver-assistance features such as Rear Traffic Alert and stop-and-go Adaptive Cruise Control, two new features also will be offered on the Atlas Cross Sport:

There will be eight trim levels: S, SE, SE w/Tech, SE w/Tech R-Line, SEL, SEL R-Line, SEL Premium and SEL Premium R-Line. Pricing information will be announced ahead of the launch in spring. 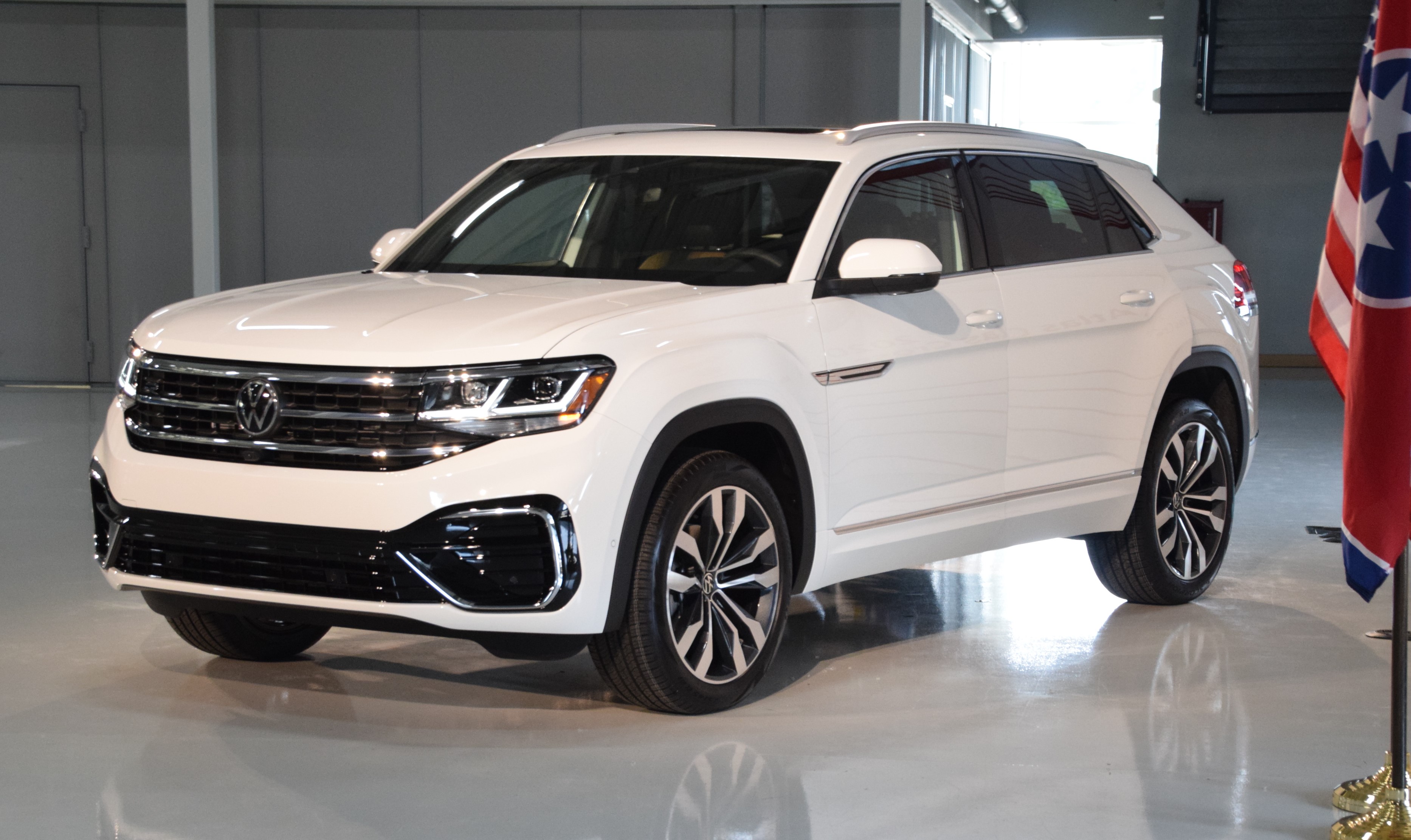