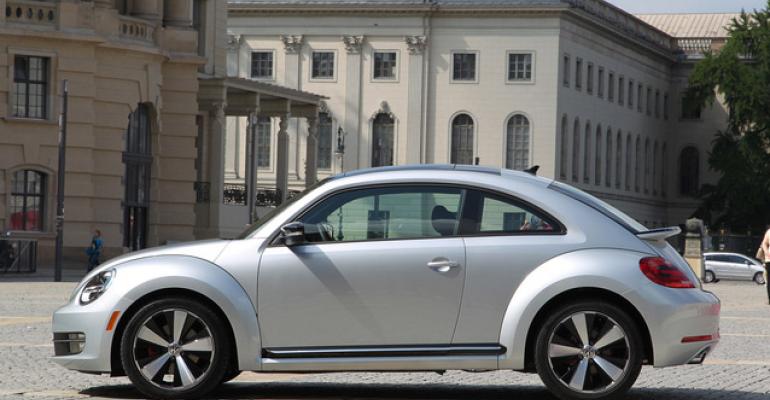 <p> <strong>&rsquo;12 VW Beetle honors past, both inside and out.</strong></p>
Industry News

The new Beetle interior plays up the rich, historical cues that made the original car so special while integrating the electronic and safety features today&rsquo;s buyers demand.

It wasn’t the departure of the nostalgic flower vase on the dash of the redesigned Volkswagen Beetle interior that won over the editors picking this year’s Ward’s 10 Best Interiors, but it certainly helped to lose a quirky accoutrement that essentially guaranteed men wouldn’t shop the iconic Bug.

Doubling the potential pool of buyers via a new styling philosophy already has paid off handsomely for VW: Beetle sales in the U.S. through March were up 355%, compared with like-2011, according to WardsAuto data.

The showroom litmus test is as good as any in proving the new Beetle – both inside and out – manages to walk the fine line between whimsy, which appeals to female Beetle shoppers, and street cred, which keeps the dudes interested.

The new Beetle interior also manages another high-wire balancing act by playing up the rich, historical cues that made the original “Type 1” Beetle worthy of 21.5 million customers while integrating the electronic gizmos and safety features today’s buyers demand.

Aesthetically, the blazing red instrument panel and door trim pay tribute to a bygone era by matching the sheet metal of the Beetle evaluated in the competition, and those interior surfaces, although plastic, truly capture the sheen and luster of stamped, painted steel.

Contrasting nicely with the glossy red trim is gray high-quality plastic that reinforces the interior’s quirkiness. Another oddity: the outer climate control vents near the windows are round, while the vents that book-end the center stack are rectangular.

But it all works magnificently, accented by upscale, discrete applications of satin-finish brushed aluminum on handles, speaker and instrumentation trim and the center-stack bezel.

Speaking of instruments, anyone who has ever strummed a guitar will be drawn to the 400-watt Fender premium audio system, which uses a subwoofer and front dual-voice coil speakers to fill the cabin with concert-quality sound.

Other technologies also bring the Beetle into the 21st century, including 3-color ambient lighting, a USB jack for an MP3 player and a 5-in. (12.7-cm) user-friendly touchscreen that integrates audio and navigation controls. This is the first time navigation has ever been available in the Beetle.

Despite these niceties, the Beetle honors its past with a grab handle that hangs from the B-pillar, rather than a modern, spring-loaded handle mounted to the headliner. The dual gloveboxes of the original Beetle also return, with a conventional lower unit and the top-hinged kaeferfach, or “Beetle bin.”

Our tester vehicle stickered at $25,195, plus a $770 destination charge, which makes it the fourth least-expensive vehicle among Ward’s 10 Best Interiors winners. That’s a reasonable price for German engineering, spot-on styling and a piece of the multi-generational Beetle mystique.