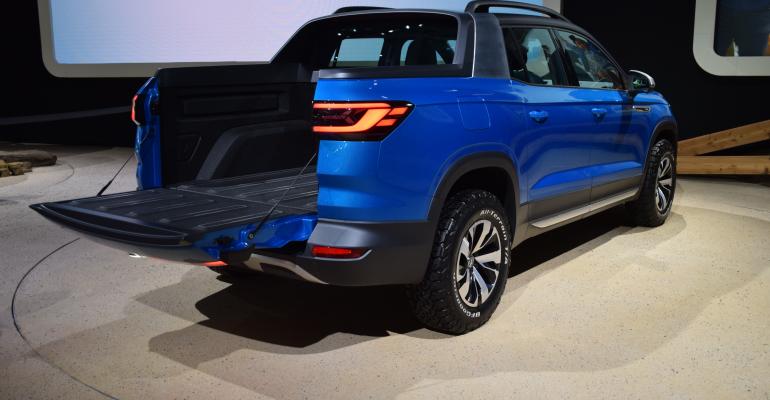 The road ahead is fraught with complication, as using the Ford Ranger’s platform for a new generation of Volkswagen’s aging Amarok compact pickup – a possible scenario – would create new competition for the Ranger in the U.S.

SOLVANG, CA – Volkswagen admits what many have thought about its recent partnership with Ford on trucks: It’s clear as mud, at least when it comes to light vehicles.

That’s how Hein Schafer, the newly installed senior vice president-product strategy for Volkswagen of America, boils down the situation.

“It’s still a little bit hazy to be quite honest. We’ve kind of signed probably what could be classified as some sort of a joint agreement to say, ‘Hey, let’s partner up, let’s share ideas.’ What will come of it is, at the moment, still not 100% certain,” Schafer tells Wards here during a recent Arteon media drive.

A very small, tight-knit team inside both VW and Ford are hammering out how to make the most of the pact, Schafer says. VW and Ford thus far have announced collaborations on commercial vans and midsize pickups, although Schafer’s comments suggest the latter project may be more difficult than originally thought.

“There is some sort of opportunity that maybe a pickup collaboration could happen – that is something that’s still in the cards,” he says.

He notes the road ahead is fraught with complication, as using the Ford Ranger’s platform for a new generation of Volkswagen’s aging Amarok midsize pickup – a possible scenario – would create new competition for the Ranger in the U.S.

“You've got to think about it realistically: We would have to build a vehicle on a Ford platform that would have to look totally different to the Ford, so it’s a complex project. And also, obviously, Ford (would) have to remain competitive in the market. They’re not going to throw, like, an olive branch at us and give us their Ranger or whatever else. It’s super-competitive (in that segment).”

However, Schafer says there is precedent for such a partnership, as currently alliance partners Nissan and Renault are in a similar pact with Mercedes. Nissan’s Navara platform also underpins the Renault Alaskan and Mercedes X-Class midsize pickups.

In the past, and perhaps less successfully, Dodge shared its Dakota platform with Mitsubishi for a midsize pickup known as the Raider, while Nissan North America shared its Frontier platform with Suzuki for the Equator. Both the Raider and Equator were short-lived due to lackluster sales.

The current Amarok, assembled in Germany and Argentina, is not sold in the U.S., but VW has been mulling bringing a next-gen version stateside, and has been teasing trucks in general through a variety of concept pickups. The most recent, the Tarok, debuted a few weeks ago during the New York auto show.

The Tarok hints at a pickup smaller than current small pickups, which now are considered midsize as most have grown substantially over the past 20 years.

“What will happen is South America will produce that pickup we showed at the New York auto show, and we’re trying to gauge if it would be something interesting for the U.S. customer,” Schafer says of the “lifestyle” pickup that is similar in focus to the new Jeep Gladiator and forthcoming Hyundai Santa Cruz. Ford also reportedly is investigating a smaller-than-Ranger pickup.

“If you’re someone who has an active lifestyle, who wants to throw a bicycle in the back, a motocross bike in the back, throw some skis in the back…then this is something that’s interesting for you,” he says of what VW is calling an A-segment pickup.

VW is not looking at getting into fullsize pickups, with Schafer noting the difficulty Toyota and Nissan have had cracking the segment with their respective Tundra and Titan models. The lack of Japanese market share in the segment isn’t surprising given the credibility and history inherent in fullsize pickups by the Detroit Three.

“(An) F-150 competitor? I don’t think for Volkswagen it will ever really work. F-150 has that segment sewn up so tight. And for us to try and produce a pickup – even if we match the F-150 in every single aspect…trying to conquest an F-150 customer would be stupid.”

Meanwhile, Volkswagen is once again advertising the benefits of battery electric vehicles (BEVs).

The automaker is undertaking a marketing push to prep vehicle buyers for its upcoming suite of I.D. BEVs. It also may be doing so as part of its Dieselgate settlement with the U.S. federal government. The settlement reached in 2016 called for VW to spend a portion of $2 billion on “awareness initiatives” for BEVs.

VW last year aired a similar campaign, featuring a Chevy Bolt BEV and using the theme music to the 1960s cartoon The Jetsons.

Late next year, VW in the U.S. will launch the first of its I.D. models, the I.D. Crozz CUV. Also coming in the next few years are the I.D. hatchback, I.D. Vizzion coupe-styled sedan and I.D. Buzz bus BEVs.

All are expected to have at least 250 miles (402 km) of range from a fully charged lithium-ion battery pack.