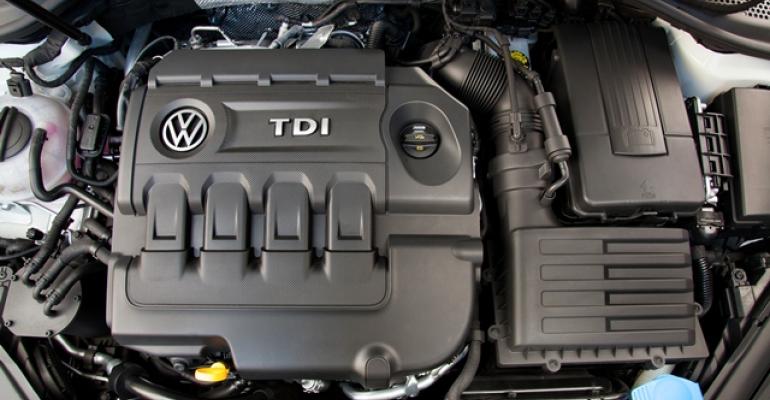 Ben Greenawalt bought his ’10 Volkswagen Jetta TDI sedan for his 86-mile (138-km) daily commute as a turbine technician, saying the car delivers a whopping 46 mpg (5.1 L/100 km) and the torque necessary to take down the valleys and plateaus of east-central Pennsylvania when he’s trailering motorcycles and camping gear.

Three of Greenawalt’s colleagues did the same, and they stand together in their unwillingness to participate in a Volkswagen recall due on Nov. 20 and aimed at fixing the automaker’s deceptive emissions control technology.

“I’m not angry at all,” Greenawalt tells WardsAuto. “I stand with Volkswagen.”

The device snuck VW diesels under government tailpipe-emissions standards around the world, but in everyday driving the cars will spew up to 40 times the allowable levels of nitrogen oxides to provide owners with enviable efficiency and fun-to-drive attributes.

Long lauded by the motoring press for diesels that would easily exceed fuel-economy estimations, VW is reeling from the scandal. In recent weeks its CEO has been replaced, along with key powertrain executives. Its top executive in the U.S. testified before Congress and another newly appointed one in North America quit his post before working a single day.

Back in Wolfsburg, the automaker has socked away €6.5 billion ($7.3 billion) to fund potential lawsuits and the pending recall of some 11 million cars worldwide, including nearly 500,000 in the U.S.

The German automaker faces a steep, multi-faceted battle to regain its credibility. However, experts say, VW’s greatest challenge might be simply persuading owners such as Greenawalt to bring their cars in for the emissions updates regulators demand.

VW USA CEO Michael Horn on Oct. 8 admitted to Congress that the fix planned for affected vehicles would result in fuel economy equal to the MPG-estimations on the Monroney and there “might be a slight impact on the performance.”

Owners contacted by WardsAuto over the telephone and through social media, where they have voiced their displeasure with regulators, do not appear willing to give up their diesels.

“TDI makes perfect sense for where we live,” Greenawalt says. “We all bought them for fuel economy.

“What’s the trade-off?” he asks. “I’ll use more fuel but have lower emissions? What’s the difference?”

Kyle Rumley of Freeland, PA, has no intention of bringing his ’10 Jetta sedan in for a fix, either.

“It’s a great car – great power and great fuel economy. I just love it,” he says. “I’m probably not going to take it in.”

Legally, VW has few levers to pull in the U.S. to compel owners, says Tom Manganello, partner and co-chair-Auto Industry Group at the law firm Warner Norcross & Judd in Detroit. Unless a state requires annual emissions inspections, owners essentially are free to keep their TDIs as-is, he says.

“The government cannot come and take your property,” he tells WardsAuto.

Since 1977, 30 states and the District of Columbia have enforced emissions testing, but not all of them require it annually and many laws only apply in metropolitan areas.

In California, where the Air Resources Board joined with the U.S. EPA to reveal VW’s deception, the automaker has agreed to give the state monthly updates on which vehicles have been repaired. After six months, CARB will share that information with the state’s motor vehicle department, which will flag unrepaired models.

When owners of unrepaired vehicles attempt to re-register their cars, the recall will be a condition of registration. California’s success rate under those conditions in past recalls has been greater than 90%, CARB spokesman Dave Clegern says.

Expect financial incentives to make up the difference, Manganello says.

“VW is going to have to pay up to get these cars fixed and buy back loyalty,” he offers.

Gift cards are one approach automakers have used in the past. Hyundai and Kia offered them in 2012 to more than 1 million owners affected by fuel-economy overstatements. The Korean automakers also paid $395 million to settle class-action lawsuits in the case.

So far, two VW class-action suits have been filed in the U.S. – one in California seeking immediate buybacks and the other in New Jersey demanding billions of dollars in compensation.

Greenawalt says he’s been contacted by lawyers representing one suit, but not-so politely declined to participate. “I told them to (go away),” he recalls.

Ford restated fuel-economy estimates on six models in 2013 and chose to offer goodwill payments of up to $1,050 to owners.

Up to now, the biggest recall scandal in the U.S. has been the ignition-switch safety defect at General Motors in 2014. The defect was found responsible in the deaths and injuries of hundreds of people. Despite the danger, owners of affected vehicles were slow to bring their GM cars in for a fix until the automaker dangled some incentives.

GM offered gift cards ranging in value between $25 and $50, on top of direct messages to Facebook accounts and ticket giveaways to state fairs and other events. The tactic pushed the automaker’s recall completion rate to 75%, says spokesman Alan Adler.

The U.S. industry average for recall completions, according to the consumer website AutoTrader, was 48% in 2014.

VW also does not have the authority to fix the emissions software on vehicles brought in for other service and maintenance, Manganello says.

“They cannot perform recall work on your car without your permission,” he says. “They can only advise you to have it performed.”

VW could face the most expensive route to getting polluting vehicles fixed – buybacks. Kelley Blue Book, a resale estimator, expects a buyback in the U.S. alone would cost VW $7.3 billion.

According to Black Book, another appraiser, the U.S. resale value of Golf diesels since Sept. 18 fell 5%, compared with 3.5% for comparable gasoline models of the hatchback. The Jetta diesel’s resale value fell 7.9% in the same period, vs. 3.5% for gasoline models. The Passat diesel fell 7.9% against 2.3% for gasoline, while the Beetle diesel declined 6.5% compared to 2.3% for its gasoline counterpart.

It’s an ironic turn, too, because a key factor in diesel purchases is the technology’s resale value.

“It has become a less-desirable vehicle,” Manganello says.

Matt Forero, a car blogger from Santa Monica, CA, leased a ’14 Jetta TDI SportWagen last year. Shortly after the emissions scandal broke, he tried to sell it back to remarketing giant CarMax. A car with 14,000 miles (22,500 km) that stickered for $30,550, he says in his blog, returned a CarMax appraisal of $15,000.

Ferero says he also struck out trying to trade into another VW, and his attempt at unloading it for a Subaru STi also swung and missed.

“I tried to trade my TDI for an STi and was treated like I have STDs,” he says.

Don’t blame dealers, though, says Bill Fox, a suburban Detroit VW store owner and 2015 chairman of the National Automobile Dealers Assn. He doubts many owners of VWs with diesel engines will be trading them in because the resale values have dropped so precipitously.

“If I were a VW dealer, I wouldn’t want a yard full of diesels I can’t sell,” Fox says.

Ferero says he has no plans to stay with VW after his Jetta lease expires. Its people like him who could prove most costly to the automaker, a C-Suite executive at one global automaker tells WardsAuto.

“Volkswagen will never get back the environmentalists, or the influencers, who bought their diesels and bragged to their friends about the performance,” the executive confides. “They value their reputation and VW tarnished it. You can bet they are telling all their friends exactly that.”