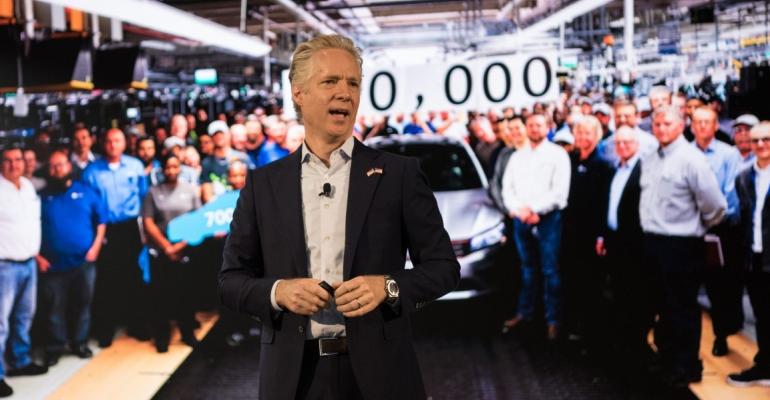 CHATTANOOGA, TN – After several “challenging” years of meager output of Passat sedans here since production began in 2011, Volkswagen Group of America President and CEO Scott Keogh says the plant now is profitable and likely will double production from this year to next.

Through August this year, according to Wards Intelligance data, the Chattanooga plant manufactured 95,317 vehicles, including Passat sedans and three-row Atlas CUVs, which went on sale in 2017.

An all-new second-generation Passat hits the market in January, while a two-row Atlas derivative, the Cross Sport, launches in spring, fueling Keogh’s optimism about next year’s ramp-up.

In total, VW has invested $2.3 billion in its plant here, which employs 3,800 people and since 2011 has manufactured 965,220 vehicles. Until the Atlas arrived, the plant’s only product was the Passat.

The plant reached VW’s initial goal of 150,000 vehicles annually only once, in 2012, its first full year of production. The slide over the next three years coincided with U.S. consumers opting for utility vehicles instead of sedans. The Passat was one of many casualties in the migration. 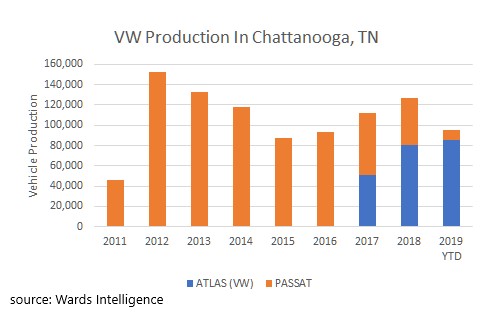 A few years ago, Keogh says CUVs made up only 14% of VW sales in the U.S. Today, that mix is up to 52% with the arrival of the Atlas. The redesigned Tiguan, larger than its predecessor, launched last year and now is VW’s most popular vehicle.

Filling the gap between the Tiguan and Atlas is the two-row Atlas Cross Sport, which Keogh sees as an opportunity to significantly grow VW sales in the U.S. and to help the plant sustain profitability.

“This plant, in and of itself, is profitable,” Keogh tells journalists during a recent roundtable here. “It’s profitable with its export business and it’s profitable in its (domestic) business.”

About 30% of Atlases produced here are exported to Mexico, Canada, Russia and the Middle East, while 20% of Passats are shipped overseas, VW says.

Overall in North America, Keogh says VW is “getting close to break-even. We’re not there yet, but this is something we’re going to continue to work on.”

Eleven years ago, when VW announced plans to build its manufacturing facility here, then-CEO Martin Winterkorn vowed VW would sell 800,000 vehicles in the U.S. by 2018, and the Chattanooga plant would play a vital role.

“If you look at Volkswagen, frankly, it’s never been an easy journey here in America,” Keogh says.

This coming February or March, VW will unveil the production version of the ID. Crozz (pictured below) concept all-electric CUV, likely with a different name and slated to go on sale in the U.S. in late 2020.

That first EV from VW’s flexible MEB platform will be imported from Zwickau, Germany, before production is localized here in 2022. 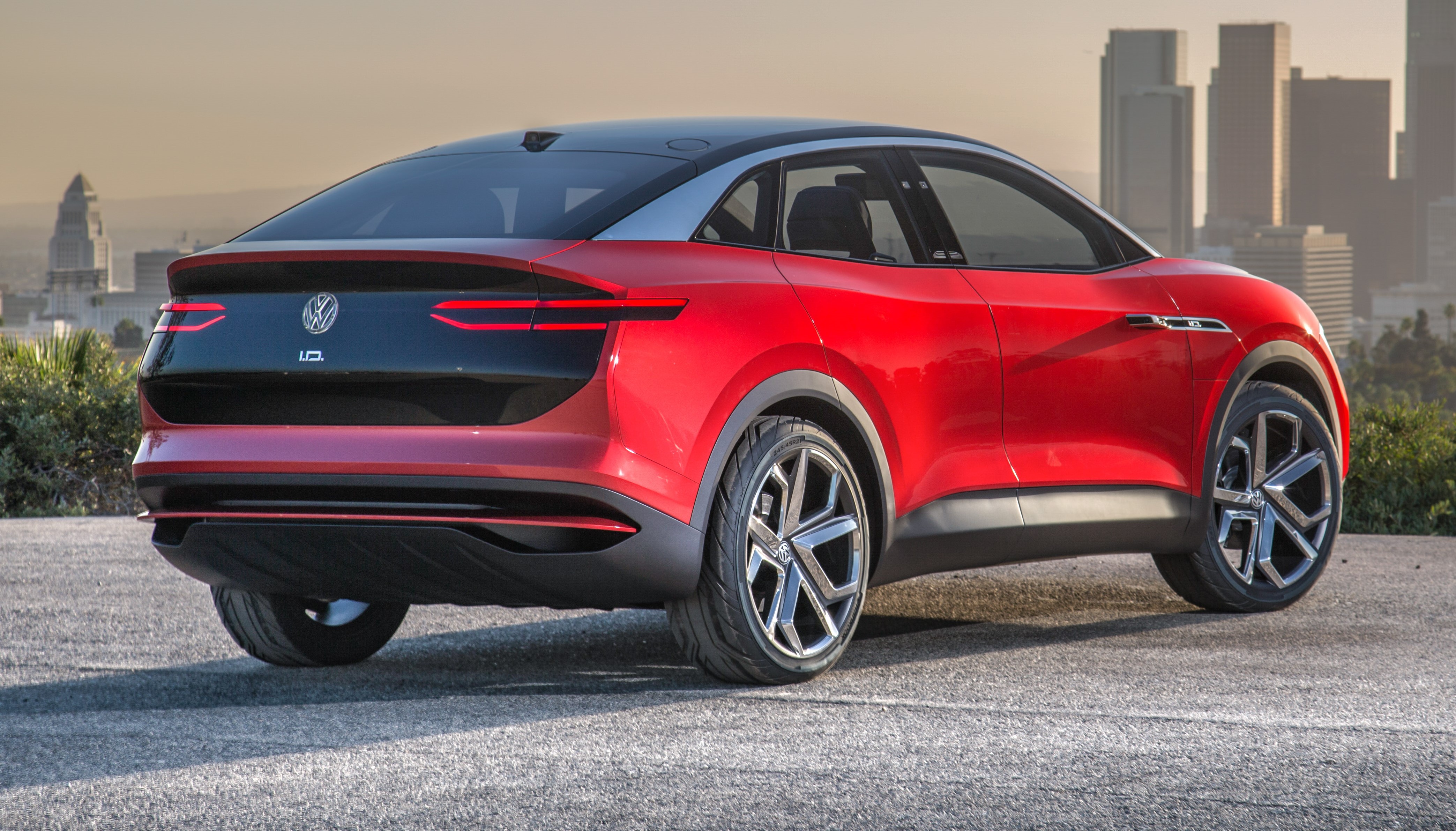 VW is investing another $800 million in Chattanooga to prepare for EV production, expanding the body shop and creating 1,000 more jobs. EVs and combustion-engine vehicles will share the same assembly line.

Asked if Chattanooga will have capacity to build a second EV, Keogh says no announcement has been made.

“We’re highly capable of making a second vehicle,” he says. “But let’s get the first one here, and let’s see some success and away we go.”

Asked if a second EV in Chattanooga could be the ID. Buzz concept that resurrects VW’s iconic Microbus concept, Keogh sounds doubtful.

“I don’t see that, because I don’t think there will be enough volume in that segment to give you the scale that you need to localize,” he says. “So that car most likely will sit in one plant, the one plant in Germany, and we will import that car, which I think makes sense.”

Employees at the Chattanooga plant work two 10-hour shifts four days a week. If the plant doubles output over the next year, as Keogh predicts, might the automaker need a fifth day of production or additional capacity?

“It’s certainly going to be busy,” he says. “But as to how we handle the production shifts and everything else, the production guys will work with the employees to determine the appropriate shifts.” 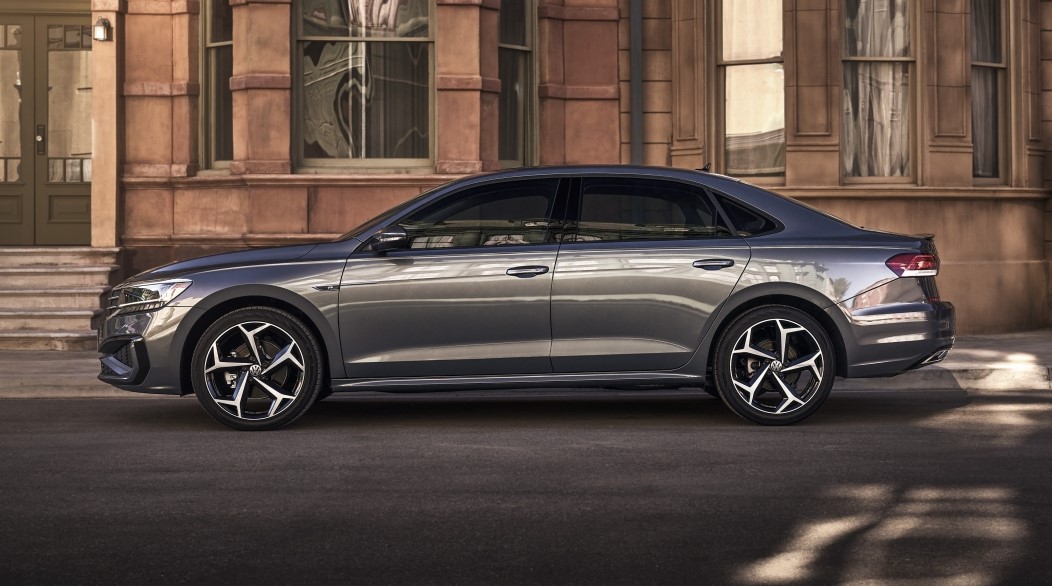