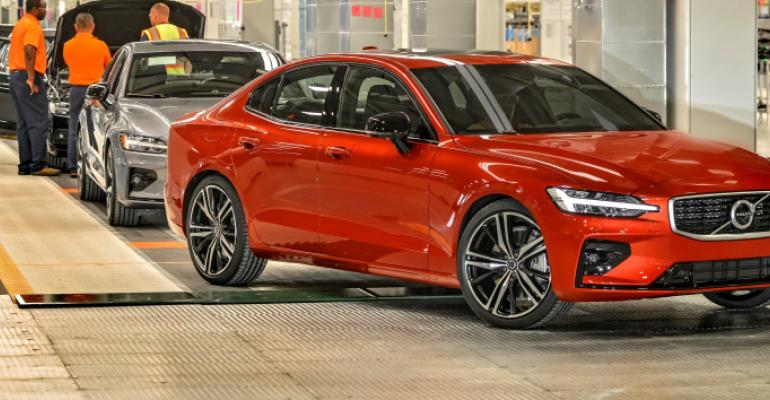 Volvo Sees Initial Capacity at 50,000-60,000, Inventory Can Guard Against Tariff

However, he says that depends on how well the S60, on sale this fall in the U.S. and being assembled here, is received.

As with other midsize luxury 4-doors, the S60 has been losing ground to CUVs and SUVs, as relatively low fuel prices and a proliferation of models have made those bigger, more utilitarian vehicles a popular choice.

Half of the new S60s built at the Ridgeville plant will be for export, but to achieve even 25,000-30,000 U.S. sales annually Volvo will have to reverse a downward trend in this country with the car.

Samuelsson appears unfazed by the possibility of Volvo having more capacity than necessary to meet demand. If automakers don’t install capacity in anticipation of future growth, “you will never be able to grow,” he tells media during a roundtable following the plant’s June 20 opening ceremony.

Besides South Carolina, Volvo has vehicle-assembly plants in Torslanda, Sweden; Ghent, Belgium; and in the Chinese cities of Chengdu, Daqing and Luqiao. The Torslanda and Ghent plants together can assemble roughly 500,000 vehicles annually.

Volvo could double its 2017 volume of nearly 600,000 in five years without new capacity, Samuelsson says.

“I think we could build those (600,000 more units) in the plants we right now have,” he says. “We need more people, we need more robots, we even need some investment, but we don’t need any more locations.”

The Ridgeville plant (see photo below) on June 20 was doing practice builds in anticipation of S60 pre-production runs beginning in roughly three weeks, with production builds of the car slated to begin Aug. 27.

The new plant will begin production with a single shift, running from 7 a.m. to 3:30 p.m., with a second shift anticipated next year, Anita Wommack, production supervisor in the chassis department, tells media during a plant tour.

Volvo still is hiring workers for the final assembly area of the plant. It still needs to hire roughly 35 of the 350 workers necessary to churn out 15 cars per hour on a single shift, she says.

Volvo intends to employ 1,500 in all three shops at the plant (body, paint, final assembly) by year-end and 3,900 when the next-generation XC90 begins production in 2021, by which time full output of 150,000 vehicles annually should be reached. Meanwhile, Samuelsson voices his displeasure of the tariff wars occurring right now, noting societies benefit from open, free trade and competition. “Restricting that goes back to the 19th century or something. That is not the way forward,” he says.

Volvo currently imports all the vehicles it sells in the U.S. from Europe and China. U.S. President Donald Trump has applied a 25% tariff to Chinese vehicle imports going into effect July 6.

Samuelsson says the customer is the loser in these situations, because the cost of the tariff will need to be passed on to them and cannot be absorbed by the manufacturer.

“Trade restriction and duties only makes the cars more costly for the end customer – that’s the end result,” he says.

All Volvo S90 large sedans and XC60 compact CUVs sold in the U.S. are imported from China, says a Volvo spokesman. The current-generation S60, about to be replaced by the new South Carolina-built ’19 model, was as well.

While the spokesman will not say what Volvo’s plans are come July 6 with regards to imports of the S90 and XC60, he notes the automaker has a good inventory of each model, implying it will be OK for a while should shipments of either vehicle come to a halt.

Volvo says it has a 44 days’ supply of the XC60. The compact CUV is its No.2 best-selling model in the U.S., Wards Intelligence data shows.

A 25% increase in the price of the vehicle, which today retails for between roughly $41,000 and $45,000, would no doubt harm the XC60’s sales momentum and make competitors more alluring.

However, the segment’s top-selling models – many imported from Europe – could be facing tariffs, as well.

Trump has made it known he finds imports of German vehicles disdainful.

Trump already has placed a 25% tariff on imports of European aluminum and steel and some industry watchers believe tariffs on vehicles are next.

“You look at the European Union. They put up barriers so that we can’t sell our farm products in. And yet they sell Mercedes and BMW, and the cars come in by the millions. And we hardly tax them at all,” The New York Times quotes Trump as telling a Duluth, MN, crowd yesterday.

The No.1-selling compact luxury CUV in the U.S., the Mercedes GLC, is imported from Bremen, Germany. The only other model in the segment imported from China is the Buick Envision.

Another twist in the tariff-war saga is China’s retaliation. A 25% tariff on U.S. vehicles imported to the Asian country also takes effect July 6. Volvo, owned by a Chinese automaker Geely, plans to export S60s built here in Ridgeville to China.

Samuelsson says tariffs, Chinese or European, threaten Volvo’s plan to bring employment at the plant to 4,000, as half of the plant’s workforce will be dedicated to producing vehicles for export.