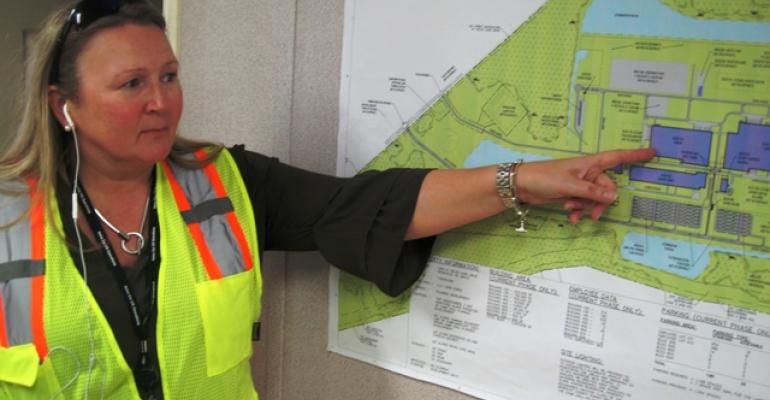 Volvo breaks out of its Scandinavian roots with plants in Asia and its first in the U.S., a $500 million factory in South Carolina that begins building S60 sedans in late 2018.

RIDGEVILLE, SC – Volvo is on track to complete its sprawling $500 million factory here in time to begin production of S60 sedans for the global market by fall 2018, but the Chinese-owned Swedish automaker still is building its local supplier base to support the facility.

Volvo officials initially projected about 30% of its parts would be sourced from suppliers in North America, many within range of the plant located about 35 miles (56 km) northwest of the port city of Charleston, SC.

But since the September 2015 groundbreaking, that number is up to 40%, including the addition of Gestamp Automocion, a Spanish-owned metal-stamping specialist that supplies BMW’s plant in nearby Spartanburg, SC, says Lex Kerssemakers, senior vice president-Americas and president and CEO-Volvo Cars of North America.

Volvo’s investment helps enlarge Gestamp’s capacity to provide body panels for the ’19 model year S60. Those parts originally were expected to be produced in Sweden and shipped to South Carolina for assembly, but by sourcing the stampings locally Volvo eliminates transatlantic shipping costs as well as losses associated with in-transit damage and subsequent repairs, Kerssemakers notes.

In addition to Gestamp, Volvo has inked supplier contracts with Autoneum for carpets and insulation, Lear for seats, Plastic Omnium for bumpers and Continental for tires.

An area set aside for a supplier park north of the 1,500-acre (607 ha) plant site remains vacant for now, but Volvo expects that to change as it grows its supplier base. For now, the plant will draw on some 400 automotive-related companies already supporting BMW and a Mercedes-Benz Sprinter van factory, also near Charleston.

Volvo relies on some 4,000 suppliers globally, including 1,200 direct material suppliers, and many of those with links to the automaker in Europe are likely candidates to support the South Carolina plant.

​Kerssemakers says the effort to find local suppliers and the decision to locate the plant in the U.S. in the first place are part of the deliberate transformation strategy Volvo CEO and President Hakan Samuelsson put into motion in 2011.

“We are definitely on the journey,” Kerssemakers tells journalists visiting South Carolina to tour the partially completed plant. “We have totally reinvented Volvo. We’re growing and we’ve invested in new products. In four-and-a-half years we’ve totally refreshed our product portfolio.”

The global business plan followed the purchase of Volvo Cars from Ford by Zhejiang Geely in 2010, and just a few short years removed from the global economic downturn and the possibility that Volvo would disappear altogether from the U.S. market, much like its Swedish counterpart Saab.

While part of the makeover includes growth in Asia – Volvo has built four new plants in that region in recent years – Samuelsson said in early 2015 the U.S. “is an absolutely crucial part of our global transformation” and locating a plant in the U.S. “makes it perfectly clear that Volvo is in the U.S. to stay.”

“Volvo Cars cannot claim to be a true global car maker without an industrial presence in the U.S.,” Samuelsson said.

Kerssemakers says that early decision effectively put an end to any “bean counting” and further discussion of chasing competitors who were building factories in Mexico.

“This was long before President Trump,” Kerssemakers says. “We needed to give a very clear signal to our dealers and our customers.”

Kerssemakers says decisions made in 2014 also determined the company’s global manufacturing footprint, with the North American plant slated to build the next-generation S60 midsize sedan despite its location in a market rapidly skewing toward CUVs and pickup trucks. Half of the U.S.-built S60s will be exported, he says.

Volvo estimates the factory will employ up to 2,000 people over the next decade and up to 4,000 people in the longer term, producing 60,000 vehicles annually to start. The automaker says it will announce a second model for the plant within six months, taking advantage of the facility’s maximum capacity of 120,000 units per year.

An analysis compiled by Frank Hefner, economics professor at the College of Charleston, estimates those 2,000 jobs will lead to the creation of more than 8,000 total jobs, and the plant will contribute some $4.8 billion in total economic impact annually.

Volvo says its first-ever U.S. plant is on track to open on schedule under the guidance of Katarina Fjording, vice president-purchasing and manufacturing for the Americas. Sweden native Fjording has worked for Volvo since 1989, with her most recent assignment overseeing development of three car factories and an engine plant in China.

Despite initial delays due to severe flooding and hurricanes, “We are on track with construction,” Fjording assures. The factory’s three major buildings – body assembly, paint and final assembly – each are fully enclosed and weathertight. Installation of line equipment and robots began in March and is expected to be completed by late summer.

During a tour of the facilities, Fjording and Ake Larsson, director of construction and part of a 12-person team managing the project, show off huge, gleaming new buildings painted in Volvo’s trademark shades of blue, gray and white.

Inside, rows of robots, assembly-line equipment, piping and other hardware stand ready for installation. Paint booths are in place, as are enclosed overhead viaducts that will convey assembled bodies from building to building along the production line.

Plans call for little on-site warehousing; instead, most parts will arrive in transport containers that will serve as storage until the parts are needed. About half of the completed vehicles will be transported to the U.S. market on railcars, via a new dedicated railyard adjacent to the plant, with the remainder loaded on trucks bound for the Port of Charleston and global export.