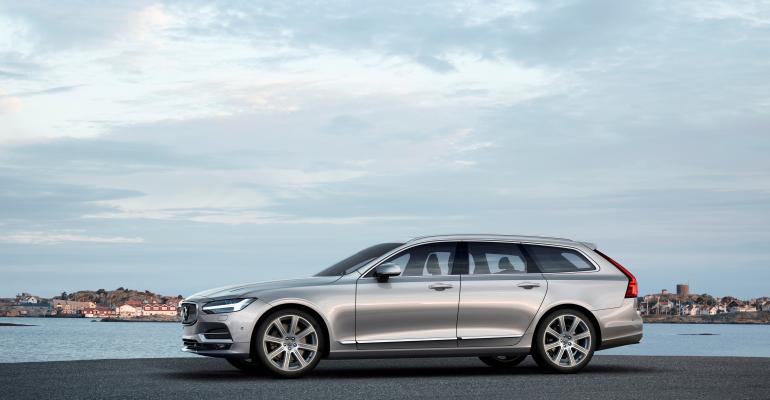 Facing what a senior executive calls the prohibitive cost of stocking vehicles on dealer lots, Volvo only is selling the Volvo V90 &ndash; an updated version of an old-fashioned station wagon &ndash; to customers who specifically find and order the car online.

Volvo Cars launches an experiment that limits sales of new vehicles to an online portal and basically eliminates the need for dealers to carry the car in their inventory or even have a demonstrator in their showrooms.

Faced with what a senior executive calls the prohibitive cost of stocking vehicles on dealer lots, Volvo is selling the Volvo V90 – an updated version of an old-fashioned station wagon – only to customers who specifically find and order the car online. Buyers will have to wait up to three months for the vehicle they order to arrive at a dealership for delivery, according to Volvo officials.

Lex Kerssemakers, senior vice president-Volvo Americas and President and CEO of Volvo Cars USA, who soon will take up a new post as head of Volvo’s European, Middle East and Africa unit, tells reporters during a drive event in Colorado that Volvo always has planned to bring the V90 to North America from its plant in Gothenburg, Sweden.

But without the online sales, introduction of the V90 in North America would have been delayed.

Kerssemakers emphasizes that using an online sales channel for the V90 allows Volvo to get an all-new model into the market sooner and more efficiently, “More and more cars are being sold online,” he notes. “We have a challenge. We can’t continue to push cars into our retailers.

In addition, between 60% and 70% of Volvo customers lease their vehicles and online ordering can help them get the car they want at turn-in, Kerssemakers notes.

“You know well in advance when you are turning it in. Then you can order it exactly in the way you want. It’s a win-win situation,” he says, adding Volvo already has experimented with using online ordering for components and models from Polestar, the automaker’s performance-oriented brand.

“But that is a very special niche car,” while the experiment with the V90 is significantly large and will serve as a more substantive test of online ordering, Kerssemakers says.

The Volvo executive, however, insists he is not mounting a campaign to change the way Americans purchase cars. Europeans special-order their cars, while Americans select a vehicle from a dealer’s inventory. “I am not standing here as a European, trying to change that,” he says.

Online sales of the V90 – a model distinct and separate from the V90 Cross Country, which is stocked at dealerships – have begun, and while demand is low, the effort has been boosted by the loyal following the V90 has developed in Canada, notes Dean Shaw, Volvo Cars USA communications director.

Advertising of the V90, however, will be limited to the company’s website, which allows for “exploration” and “building” of a model, the automaker says.

The Swedish automaker is in the midst of launching several new models, including volume vehicles such as the XC60 utility vehicle and XC60 hybrid as well as an updated version of the S90, which are 4.5 ins. (114 mm) longer than the previous versions, Kerssemakers says. “It’s a test,” he says.

Volvo, which has seen its sales steadily increase in the U.S. since 2015, is introducing the XC40 small premium SUV in Europe this fall and plans to launch the new S60 sedan from a plant in Charleston, SC, in late 2018.