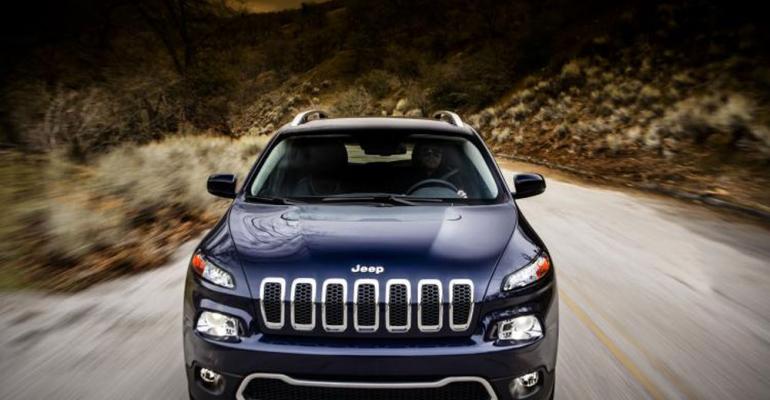 Chrysler design chief Ralph Gilles says the new Jeep Cherokee is the next step in the evolution of the SUV brand.

“When you contrast it to the outgoing Liberty…I think it’s a huge departure, obviously from the previous one,” he tells he tells WardsAuto. But it’s also going to be seen as very current in the way that Jeep has evolved its aesthetic to a very contemporary place. That was very much a purpose for us.”

The Cherokee was shown to auto writers in January, ahead of its public debut. But that was foiled when pre-production images of the SUV were leaked by an automotive website, forcing the company to release photos of the new model last week. Chrysler still is planning an official unveiling at the New York Auto Show in April.

In the run-up to the show’s unveiling, Chrysler officials caution the rounded styling, pointed fascia and squinting headlamps might be polarizing among Jeep enthusiasts. Their predictions were correct.

“Ralph, I have met you in person. Why did you let this happen? It is a travesty!” one disappointed driver tweets to Gilles. “I keep thinking the new Cherokee is some sort of April Fools’ joke?” writes another.

“There’s a lot of physics in play,” Gilles says at the reveal in Auburn Hills. “There are dynamics we have to take care of. There are certain things this new styling has to respond to. I personally see a very cool DNA strain going back to the Grand Cherokee.

“The Wrangler is always going to be the pinnacle of off-road capability. It has a certain iconic presence that can’t be taken away. It can’t be denied,” he adds. “(But) the Grand Cherokee, from the mid-1980s and onward, has evolved the idea of the sport/utility. It’s nothing to be ashamed of.”

Chrysler executives express confidence that the new Jeep model will add to the brand’s ever-growing momentum and note the significance of having a midsize hauler in the auto maker’s stable.

“For us, (it’s) one of the most important launches we’ll make because this plays very much on a global stage,” Jeep President and CEO Mike Manley said at the SUV’s first media preview at Chrysler’s Auburn Hills, MI, headquarters.

Less certain until last week was the name of the vehicle that replaces the Liberty. To fit with a unified, global strategy, the SUV would either have to continue carrying an American-centric name or return to Cherokee, an older moniker still used in some foreign markets.

Executives initially said the new name would be announced at the New York show, but other sideline conversations implied a decision had not yet been made. After the unauthorized photos surfaced, Chrysler hastily issued promotional photos and the official Cherokee name.

Mark Allen, head-Jeep design, says the design had one goal in mind: to make sure people continue to want to buy the vehicle five years from now.

“Our head was in 2019,” he says. “It’s not a big square box. It’s a little more efficient looking than the Liberty. Our No.1 goal was efficiency, and if we’re going to make an efficient Jeep, it’s gotta look efficient first off.”

There still are reminders of the Jeep heritage sprinkled throughout. Allen notes the beltline is inspired by the half-door in the Wrangler, and Chrysler promises the Cherokee will have “Trail Rated” capabilities.

Other information about powertrain options, interiors, trim levels and pricing will be announced at the New York reveal. At least that’s the plan.