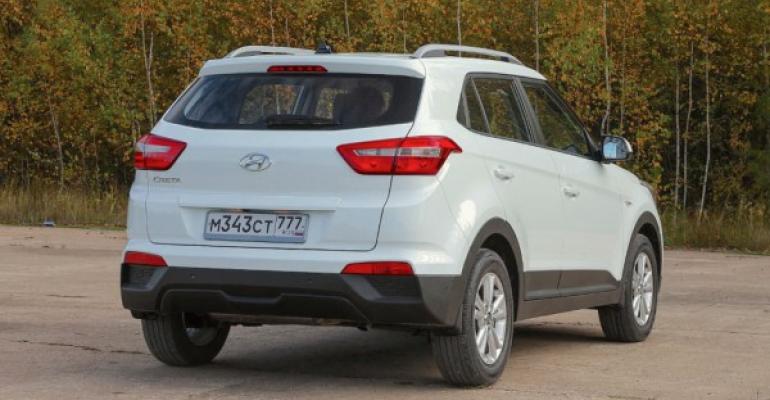 ST. PETERSBURG – The Russian auto market generally has gone sour in recent years, but global automakers have found a sweet spot in the form of CUVs and SUVs.

Sales figures underscore the vehicles’ popularity, as CUVs and SUVs are the second-largest segment of the Russian market after B-segment cars. The utility vehicles’ share of the country’s market through the first 10 months of 2016 was 38.4%, up from 35.8% a year earlier.

Light-vehicle sales through the year’s first 11 months were down 12% year-on-year but managed a 0.6% uptick in November, WardsAuto data shows.

Prospects for SUVs’ and CUVs’ growth in coming years also is reflected in increased investment and production.

For example, Volkswagen Group has invested RR12.3 billion ($19.3 million) to build a new body shop and modernize painting and engineering facilities and add a new body shop at its plant in the Kaluga region where a new-generation Tiguan midsize SUV is manufactured. Production volumes have not been disclosed.

The new Tiguan is built on VW’s MQB global modular platform with a transversely mounted engine.

Sales of the new Tiguan, VW’s second-best selling model in Russia after the Polo subcompact, begin in first-quarter 2017. The automaker is not disclosing its price; the current-generation Tiguan is priced at RR1.3 million ($21,400).

The Tiguan’s major competitors include the Toyota RAV4 and Nissan X-Trail.

Toyota in late August launched RAV4 output at its RR9.7 billion ($156 million) factory in St. Petersburg, where X-Trail models have been built since late 2014. RAV4 production, limited earlier by assemblies of the Toyota Camry sedan at the same plant, is expected to reach 50,000 units annually.

Hyundai has invested RR6.4 billion ($100 million) in the launch of its Creta CUV at St. Petersburg. Production volume is set at 20,000 units this year and could significantly be increased in coming years. The new model will be sold both in Russia and the Commonwealth of Independent States.