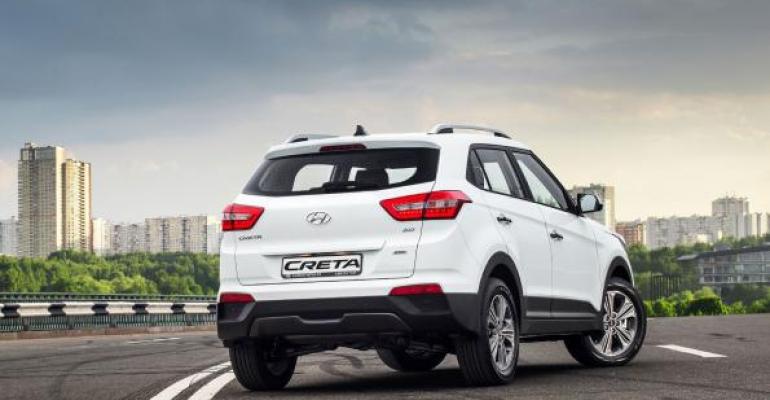 According to Russian Ministry of Industry and Trade data, CUVs and SUVs held a 42% share of the market in 2017. The segments&rsquo; current annual growth rate is 20%, a figure officials predict will hold steady in the near future.

ST. PETERSBURG – The production and sales of CUVs and SUVs in Russia are steadily growing despite the ongoing overall stagnation of the country’s automotive market, industry and government officials say.

According to Russian Ministry of Industry and Trade data, CUVs and SUVs held a 42% share of the market in 2017. The segments’ current annual growth rate is 20%, a figure officials predict will hold steady in the near future.

The utility vehicles’ popularity can be explained in part by Russians’ affinity for big vehicles and by the number of relatively affluent customers attracted to the segments.

Mazda recently launched the CX-9 CUV at its Mazda Sollers Manufacturing Rus joint venture with local automaker Sollers at Vladivostok in Eastern Russia. The CX-9 comes in two trim levels and is equipped with a 2.5L turbocharged gasoline 4-cyl. Pricing starts at RRs 2.9 million (US$51,300).

The plant, which already was producing Mazda CX-5 CUVs, has annual capacity for 100,000 semi-knocked-down units. Investments in the new project and planned production volume has not been disclosed.

The JV partners are considering producing up to 50,000 Mazda engines mainly for export at the Vladivostok plant.

Volkswagen, meanwhile, has begun assembling the next generation of Skoda Kodiaq CUV at local partner GAZ Group’s plant in Nizhny Novgorod. The German automaker invested €87.5 million ($108 million) in the project.

Mazda and VW will be joined in Russia by Renault, which has announced it will launch production of a C-segment CUV at its Moscow factory in the coming months. The French automaker will disclose details of the project at the model’s world premiere at the 2018 Moscow auto show to be held from Aug. 29-Sept. 9.

Renault says Russia will be the first country where the new global model will be built and sold. The automaker currently produces Duster and Kaptur CUVs in Russia as well as Sandero Stepway hatchbacks.

Mitsubishi late last year resumed production of its Pajero Sport SUV at its plant in Kaluga, while Daimler plans to manufacture Mercedes-Benz GLE, GLS and GLC CUVs at its Moscow plant.

The three best-selling utility vehicles in Russia are the Hyundai Creta, Renault Duster and Toyota RAV4, all of which are produced locally.

Global automakers without Russian manufacturing operations are importing products into the country. Toyota recently began importing Fortuner and Highlander models, while PSA Group has launched sales of its Peugeot 5008 and soon will put its C3 Aircross CUV on the market.

The growth of CUVs and SUVs in Russia contrasts with the B-segment, the country’s second-largest, which grew 8.1% in 2017, according to industry analyst Autostat. A-segment and C-segment sales last year fell 17.6% and 1.7%, respectively, from 2016 levels.