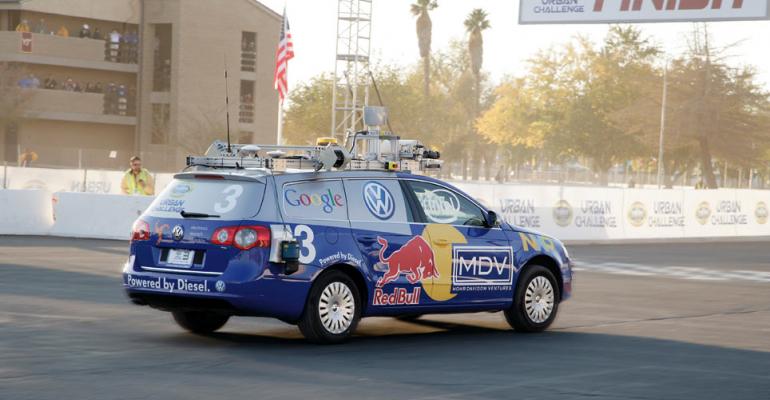 &ldquo;Until cars assume complete responsibility for driving, the critical challenge is to design vehicles so that drivers clearly understand how the car works. Even small design changes can violate drivers&rsquo; expectations and confuse them.&rdquo;

Self-driving cars could be just five years away, according to some witnesses testifying at a hearing before the U.S. Senate Committee on Commerce, Science and Transportation that was webcast Wednesday.

In the interim, lawmakers at the hearing ponder a range of policy implications and risks posed by the latest advancements in semi-autonomous-vehicle technology, questioning those testifying about what rules or standards might be needed nationwide.

U.S. National Highway Traffic Safety Admin. Administrator David Strickland assures the senators his agency will continue to investigate all levels of automation to see whether more electronics in cars can increase safety.

Last year, fatalities on U.S. highways increased 5.3% to about 34,000, he says, the first year-to-year increase since 2005. “The advanced safety technologies we are discussing today can help reduce these numbers significantly.”

Strickland says NHTSA is working with the Federal Highway Admin. and the Federal Communications Commission on V2V and vehicle-to-infrastructure platforms “designed to increase driver situational awareness and reduce and mitigate crashes.

“We believe V2V technology will complement and ultimately merge with the advanced braking systems and other crash-avoidance technologies that we are currently evaluating to shape the future of motor vehicle safety,” he says, adding that V2V potentially could address about 80% of accidents involving non-impaired drivers.

“This connected-vehicle technology has the potential to revolutionize our transportation system by drawing drivers’ attention to risks more immediately and reliably, providing protection in cases when driver attention is deficient and giving drivers more time to react,” he says. “I know of no other technology that could have the same impact on safety, and potentially in a reasonably short timeframe.”

Strickland says NHTSA will make a decision this year on V2V. “If the agency decides to go forward and approve use of the technology, it will take time for the fleet to turn over.” The average life of a car is 12-15 years, he notes. He also says a system of aftermarket beacons is being examined for its potential to accelerate the efficiency of V2V deployment.

The Ann Arbor experiment is using the 5.9 GHz communications band, and NHTSA is working with other countries to try to make it an international standard, Stickland says. However, there is some preliminary signs that the FCC is considering whether other users could access the wavelength if it would not interfere.

Mitch Bainwol, president of the Association of Automobile Manufacturers, testifies the 5.9 spectrum should remain solely for automobiles, because V2V communication must work instantly.

Before vehicle communication is deployed, “we have got to get ahead of concerns over privacy and security, and maintain affordability,” he says. “We replace about 6% of cars a year, and anything that is slowing replacement may compromise the greater good of replacing older cars with safer ones.”

Sen. Jay Rockefeller, D-WV., chairman of the senate committee holding the hearing and who already has sponsored several bills tackling the problem of distracted driving, worries “that car makers seem to be in a race to see who can add more entertainment devices and features into a car’s dashboard in the name of allowing drivers to remain connected.

“Are they at a risk of cyberattacks from some kid in Indonesia?”

Strickland says NHTSA has 12 electrical engineers in a new Electronics Systems Safety Research Div. working on encryption and other ways to prevent outside electronic attacks on moving cars.

Until now, there has “never been unauthorized access of a vehicle on the road,” he says. “Today, we would need physical access. But in the future, it would be possible” unless countermeasures are devised.

On the general question of driver distraction, NHTSA has delivered guidelines to auto makers that say drivers’ tasks taking less than two seconds of focused attention or 12 seconds of on-and-off attention are safe.

“We have drawn a bright line in the sand,” Strickland says. “Now auto makers can ‘innovate’ new features around that zone of safety. If they can, that is innovation. If they can’t, it should not be in the vehicle.”

Bainwol challenges NHTSA’s approach, insisting factory-installed devices are responsible for only 2% of the 1 million distracted-driving accidents annually and that NHTSA rules do nothing to address the other 98%.

“If a driver looking for live navigation guidance is blocked from doing so while his car is in motion, he may predictably pull out his smartphone, fiddle with the keys while looking down and retrieve the desired mapping guidance,” he says.

“That’s the real world and as much as we might want to wish that away, a policy that isn’t comprehensive across technologies and devices and responsive to consumer needs is a policy that will produce unintended and undesirable consequences.”

Bainwol urges NHTSA “to bring all the stakeholders together to forge a new set of voluntary guidelines that are neutral across technologies (and) provide consumers with the functionality they demand.” He suggests smartphones used in a vehicle could be required to connect through a voice-control system built into the car. “If we are serious, we've got to focus where the real battle lies.”

During his testimony, Strickland appears to be asking the Senate committee to call for a summit meeting of auto makers, cell-phone makers, wireless operators, Internet providers, social-media firms and others involved in the problem.

He would like to see a technology developed that could identify and prevent the driver’s handset from being able to send text messages, while allowing texting by passengers occupying other seats.

Much of the discussion at the hearing centers on semi-autonomous technologies such as adaptive cruise control and lane-departure warning, functions that assist a driver while requiring him to remain in control.

Delphi Chief Technology Officer Jeffrey Owensargues 11,000 U.S. lives could be saved right now if all cars had lane-keeping, emergency braking and other technologies already on the market. He asks NHTSA to award such active-safety features a New Car Assessment Program star rating that would help educate consumers and guide their purchase decisions.

Strickland says NHTSA is researching the subject, but he divides automation into five levels, from none to full autonomy. Between them are steps of a single autonomous function.

These include adaptive cruise control; multiple functions such as cruise control combined with lane-keeping; and part-time automation, which allows the driver to pay no attention to controlling the car but provides sufficient time to take over when necessary.

NHTSA’s work on automated-driving research, he says, is designed to “address safety questions about driver engagement and re-engagement across levels of automation, evaluate concepts of operation and development of system requirements and provide guidelines for automated sensing and control.”

John D. Lee, a professor-industrial and systems engineering at the University of Wisconsin-Madison, argues a lot of work must be done to prepare people for automated cars and says he is worried by the rapid development of electronics.

Citing an automatic paper-towel dispenser as a metaphor for his concerns, Lee says using a manual dispenser isn’t confusing, but a modern one that senses motion or requires a button to be pushed can be confusing, and “such confusion in a car can be deadly.

“Until cars assume complete responsibility for driving, the critical challenge is to design vehicles so that drivers clearly understand how the car works,” he tells the Senate committee. “Even small design changes can violate drivers’ expectations and confuse them.”

Strickland says some auto makers say autonomous cars will be marketed in five years, but given the state of NHTSA’s regulatory research that is unlikely.

Counters Lee, considering the rapid change in electronics and the capacity for automation, “in 15 years, we are likely to be in discussions whether people should be allowed to drive, because autonomous vehicles may be much less error-prone.”