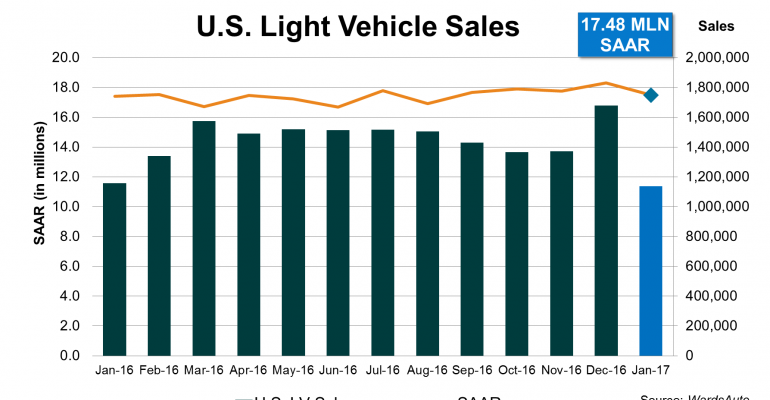 Midsize cars took a beating in January, with nearly every automaker recording double-digit losses in the segment

Good economic news, hefty inventory and rising incentives combined to kick off 2017 U.S. light-vehicle sales on a solid note, as the industry continued a strong 17 million-plus annual rate in January.

It was a solid start despite January’s 17.5 million-unit SAAR and raw volume of 1.14 million units both finishing below year-ago’s 17.8 million and 1.16 million, respectively.

Even though both totals finished below year-ago levels, results would have been relatively flat except for a stronger pull-ahead effect from December than occurred in 2015.

December 2016’s sales surged to an 18.3 million-unit SAAR, well above the entire year’s 17.5 million, and the sixth biggest monthly total ever.  By comparison, December 2015’s 17.4 million SAAR at that time was the lowest in six months, flat with the entire-year results, and therefore did not have as much negative impact on January 2016.

However, industry results last month were weaker in the sense that incentives were much higher. Based on initial estimates from ALG, average January incentives were up 22% from year-ago, while average transaction prices increased a tepid 1.4%.

Ironically, two CUV segments that declined from same-month 2016 – Large and Large Luxury – went against the grain as sales of all large trucks, including CUVs, pickups, SUVs and vans, increased 5.0% over year-ago. They accounted for 20.6% of the market vs. 19.3% in January 2016. Excluding CUVs, large trucks increased 7.1%.

Sliding demand in cars seemed to worsen in January, as volume declined 12.2% from January 2016.

Although there were some pockets of strength in small cars and in upper-priced luxury cars, all segment groups declined from year-ago.

Middle Cars, the biggest car-segment group, especially took a beating, with nearly every automaker recording double-digit declines. Sales fell 23.4% from year-ago, and market penetration of 12.3% was the lowest for any month on record, and well short of year-ago’s 15.8%.