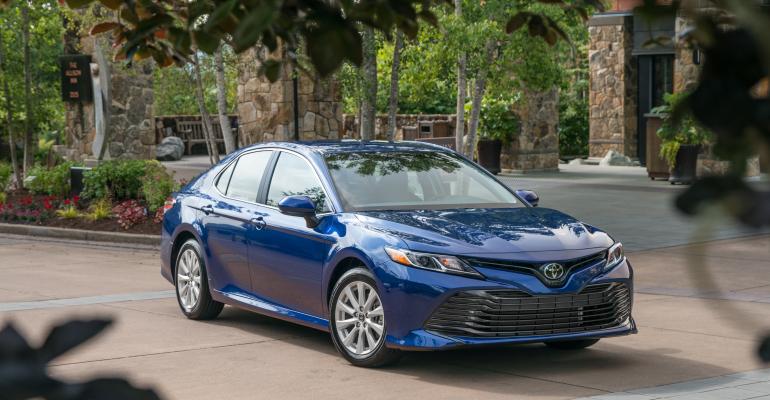 Midsize cars such as Toyota Camry (above), Honda Accord and Nissan Altima all suffered double-digit sales drops in July.
Industry News

Truck sales were strong for Toyota and Honda, but not so for Nissan, which recorded a decline from year-ago despite a solid performance from its Titan fullsize pickup.

It was a disappointing month for the Japanese Big Three, Toyota, Honda and Nissan, which collectively saw their U.S. light-vehicle sales fall 9.0% by volume for the month of July, chiefly the result of a weak car market.

Toyota saw deliveries dip 2.1% over the 24-day selling period (one less day than year-ago) on a volume of 208,770 vehicles, according to Wards Intelligence data.

Nissan recorded the biggest overall decline of the three Japanese automakers, with daily sales dropping 11.7% on a volume of 108,792 light vehicles. That included a double-digit slide (-12.2%) for the Nissan brand and a more modest 6.3% falloff for Infiniti.

Unlike Toyota and Honda, Nissan suffered a decline in truck sales, as daily volume fell 7.9% on a total of 60,613 units. That combined with a 16.0% plunge in car sales (48,179 units) in producing the automaker’s weak July showing.

Nissan’s fullsize Titan pickup did well, with daily sales up 9.3%, but the smaller Frontier saw demand weaken dramatically, with daily deliveries off 37.6%.