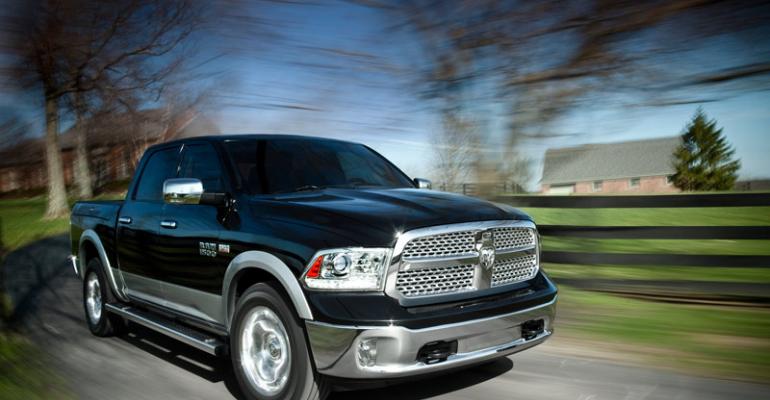 Large trucks continued to make headway last month, especially pickups, as they rode the wave of growth in the housing and construction sector and enjoyed a boost from relatively stable fuel prices.

April U.S. light-vehicle sales dipped slightly from the first-quarter’s rate on a seasonally adjusted basis due mostly to a lower mix of fleet deliveries.

Although economic data generally was favorable, auto makers believe growth also was muted by uncertainty surrounding the U.S. government’s fiscal sequester that began in January but grabbed more headlines in April as spending cuts began to kick in.

Sales of large trucks continued to make headway, especially pickups, which rode the wave of growth in the housing and construction sectors and enjoyed a boost from relatively stable fuel prices.

New product also appeared to be a factor, propping up other segments, mostly cars, that otherwise would have fared poorly against 2012 results.

April LV sales totaled 1.28 million units for a daily selling rate of 51,211 units over the month’s 25 selling days. Deliveries were 4.1% above year-ago’s DSR of 49,218 on 24 selling days. It was the 32nd straight year-over-year increase for the industry.

April’s seasonally adjusted annual rate of 14.9 million units was the lowest for any month since 14.2 million last October. It also marked the second straight month-to-month drop, following 15.2 million in March and 15.3 million in February.

Indeed, GM estimates the retail portion of the SAAR increased to 12.4 million units from 12.2 million in March.

The month-to-month trend also was dampened slightly by Nissan, which is No.6 in market share. The auto maker typically undergoes a precipitous drop in month-to-month results in April as it ends its fiscal year March 31 with a flourish, and this year was no different.

Nissan’s April sales fell 31.1% from March, which was up 22.9% from February. However, the Japanese auto maker still saw an 18.2% gain in April over year-ago, the largest among the top-volume auto makers, as well as an increase in share.

Nissan appears to finally have found traction from the string of new products introduced over the past year. Combined sales of the Altima, Sentra and Pathfinder, all redesigned for the ’13 model year, surged 46.4% in April compared with prior-year, following a mere 4.4% gain in the first three months.

Sales of large pickups took the spotlight again in April, despite the fact only five auto makers sell them in the U.S. Deliveries jumped 21.1% from year-ago, bringing the year-to-date gain to 20.1%. The segment’s industry share increased to 11.8% from 11.3% in March and 10.1% in like-2012.

Chrysler-Fiat’s results were beholden to the Ram pickup. Overall sales rose 6.2%, but excluding Ram were flat with year-ago. In contrast, GM and Ford both saw solid gains even when excluding their pickups.

Among the major volume players, Ford’s 12.9% sales increase was second to Nissan’s 18.2%, followed by GM’s 6.9% gain. Chrysler was fourth, while Honda was up 3.1%. Toyota, with the third-highest share, suffered a 5.0% shortfall from year-ago, its first decline since October 2011.

Sales of Middle CUVs tied Upper Middle cars for the highest share among segments in April, at 15.8%. The next-highest segment share, Upper Small Cars, was 14.6%. All of the segments posted a sales and share increase over year-ago.

Upper Middle car deliveries were spurred by the new Altima and Ford Fusion.

Sales of all luxury cars rose 6.3% in April, supported by an 80.6% increase at Cadillac, led by the all-new ATS and XTS.