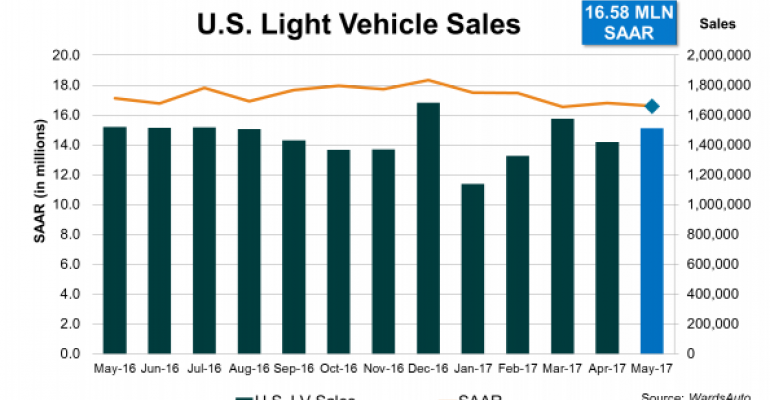 U.S. light-vehicle sales declined year-over-year for the fifth straight month in May, leaving the gate open to more production cuts as the month’s results did little to relieve the inventory burden carried by several manufacturers.

May’s estimated retail volume fell slightly from the year-ago total for the fourth month this year, while fleet deliveries declined for the fourth straight month. Also, while average transaction prices continue to increase, incentives rose faster in May, as they have consistently been doing for over two years.

Several of the same overall trends that have been ongoing for months continued, including a downturn (13.7%) in cars and a rise (1.8%) in trucks. But the more recent trend of some truck segments showing weakness also continued in May for Small and Large CUVs.

Furthermore, sales of CUVs declined year-over-year for only the second time since February 2012. However, market penetration by CUVs did rise above year-ago’s 31.8% to 33.2%.

Pickups rebounded from a flat April with a 4.7% increase. The Large Pickup segment, despite an 8.1% shortfall from segment-leader General Motors, increased 5.0% after declining in April for the first time in several months.

Although the Toyota Tacoma posted its first gain of the year, the Small Pickup segment declined for the fifth straight month when excluding the redesigned unibody Honda Ridgeline. GM, which rekindled interest in the segment after introducing new products into it in late 2014, posted a combined 11.6% decline by the Chevrolet Colorado and GMC Canyon.

Also, grouping segments together of what often is referred to as traditional trucks – SUVs, pickups, Large Vans – showed those vehicles are doing well on a year-over-year basis. However, those vehicles typically are higher-priced, meaning more room to raise spiffs.

Unlike trucks, sales for all luxury cars continue to trend down, but models in the Middle and Upper Luxury segments – sedans priced above $42,000 – did well in May and are up 16.3% year-to-date. The boost mainly is from newer products in the segments, such as the Audi A4, Cadillac CT6, Genesis 80 and 90, Lincoln Continental and Volvo 90. Most of the remainder of the vehicles in those segments posted double-digit declines in May and year-to-date.

Among the automakers, just Jaguar Land Rover, Mitsubishi, Subaru, Volvo and Tesla – which is estimated and will be revised next month – managed gains in May from like-2016. However, others recording increases in market share included Ford, Honda, Nissan, Toyota and Volkswagen Group.