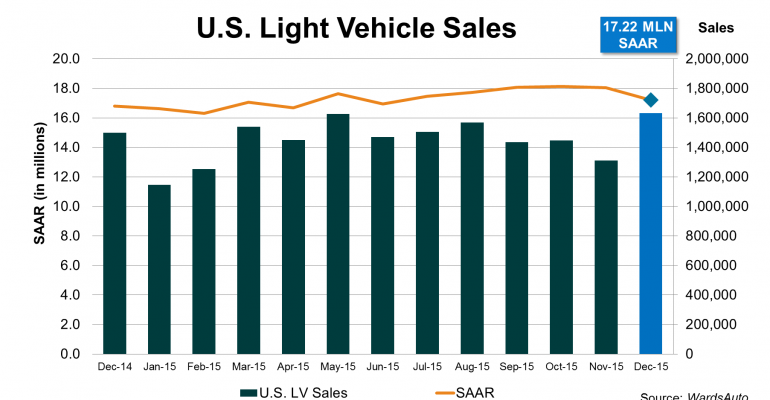 U.S. sales broke the all-time record in 2015, but did not finish off the year with quite the strength expected.

December’s results still were strong, totaling a seasonally adjusted annual rate of 17.2 million units, just not the 18 million that was anticipated. Because actual volume was lower than forecast, the year ended at 17.4 million instead of the forecast 17.5 million.

Better than expected restraint on incentives appeared most responsible for preventing the SAAR from finishing close to 18 million units. TrueCar’s initial December estimate for average incentives industrywide of $3,063 was nearly flat with November, compared with prior years when December’s rate typically increased. In fact, it was the second straight sequential decline, which also was against trend.

Furthermore, a balancing out of sorts likely was in the cards after sales suddenly spiked to three straight 18 million SAARs, following a 17.1 million-unit year-to-date total through August.

Overall, results in December (and the entire year) were supported by a generally improving economy enhanced by low interest rates that allowed for lower monthly payments and record lease volume, and falling fuel prices – now at their lowest since spring 2009 – that freed up more disposable income. Higher incentives compared with 2014 and pent-up demand caused by the recession also were volume pushers.

Falling pump prices partly explain the record penetration (56.7%) trucks posted in 2015, including an any-month high 61.2% in December. The let-up in incentives also helped truck penetration in December by hurting cars. Cars have become the weak link in the market, especially as consumers switch to CUVs, and most incentive activity likely is in car segments.

Based on daily selling rates, all car segment groups posted sharp year-over-year declines in December including 8.7% in Small Car, 9.9% in Middle Car, a whopping 15.7% in Large Car and 13.5% in Luxury Car. Even based on raw volume, all car groups posted declines in December from year-ago despite the two extra selling days. Conversely, all truck groups recorded increases: CUVs were up 16.8%; SUVs, 3.2%; Vans, 6.8%; and pickups rose 3.4%.

The strongest sector in the vehicle mix continued to be imported CUVs. Sales were up 62.8% year-over-year in December and market share totaled 9.7% vs. 6.0% a year ago. Deliveries of domestically made CUVs increased 3.9% in December.

Thanks to CUVs, and to a lesser extent, SUVs and vans, total December import penetration of 22.1% was well above year-ago’s 20.3% and deliveries were up 10.3%. Sales of domestically produced vehicles declined 1.1% from December 2014 entirely due to losses in small, middle and large cars.

Gains in the month mostly were led mostly by smaller manufacturers. Among the higher-volume players, FCA US, Honda, Nissan and Toyota posted increases above the industry average, but by the skin of their teeth in most cases – Nissan was up a hefty 10.3% and FCA rose 4.7%, however.

For the year, automakers with the highest increases over 2014 largely mirrored December. FCA, Jaguar Land Rover, Kia, Mitsubishi, Nissan, Porsche, Subaru, Tesla and Volvo were above the industry.