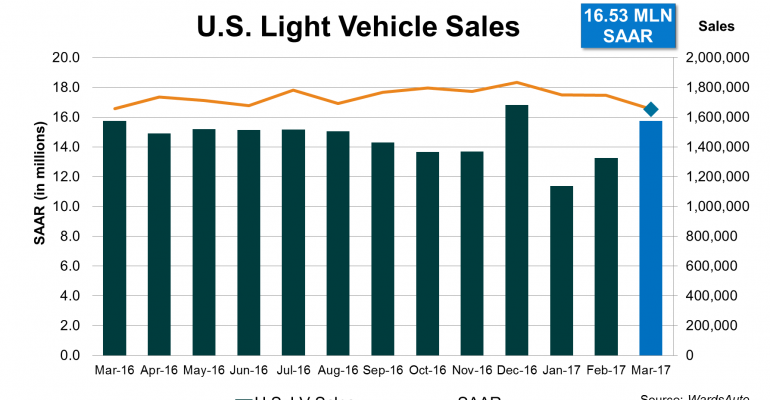 There are more signs of weakness in trucks, with growth consolidating more in the midsize CUV sector from the low-end to the premium-priced vehicles.

March U.S. light-vehicle sales finished below expectations, with cars again where most of the weakness exists, as year-over-year volumes have declined for three straight months.

There also are signs of softening in truck demand as well, with growth consolidating more into midsize, or 2-row, CUVs across the price spectrum. Three-row CUVs and minivans continued to slide, while Small Pickups declined for the first time since August 2014. Also, after being the fastest-growing segment in 2016, Small CUVs fell for the second-straight month.

The Large Pickup and Large SUV segments, where dealers have more room to dicker on price, continued to grow.

With sales coming off two straight record years and seven consecutive years of growth, downturns should not be surprising as pent-up demand created by the 2008-2009 recession has been filled.

However, a prime reason March sales did not top a 17 million-unit SAAR as forecast was the year-over-year increase in incentives – 13% based on initial estimates from ALG – was not as high as expected.

Further hurting demand is possible remaining pull-ahead from last year when the final four months averaged a 17.9 million-unit SAAR. Also, tax refunds are not being processed as quickly as usual this year, and some buyers could be waiting longer to hit the market.

Also limiting volume were fleet deliveries, estimated down from year-ago for the second straight month, although retail deliveries did increase after two consecutive monthly declines.

The lower volume also means already bloated inventory will continue to loom large entering the second quarter. Automakers are slowing production for the U.S. market but planned output levels remain relatively strong, creating the prospect that at some point, probably over the summer, there will be an industrywide blowout sale to move unwanted inventory before the industry heads into ’18 model year in October.

Dealers could be getting leery of high levels of new-vehicle inventory at the same time demand is slowing, especially with the likelihood of higher interest rates. Also possibly worrying dealers are the droves of off-lease vehicles returning to the market at a time when used-vehicle pricing is weakening. High inventory and lower prices on used vehicles usually are negatives for new-vehicle sales.

Most automakers recorded increased deliveries over last year in March. In many of those cases, automakers either increased volume because of a strong mix of fresh product in their portfolios – mainly small-volume players – or because of comparatively higher increases in incentives.