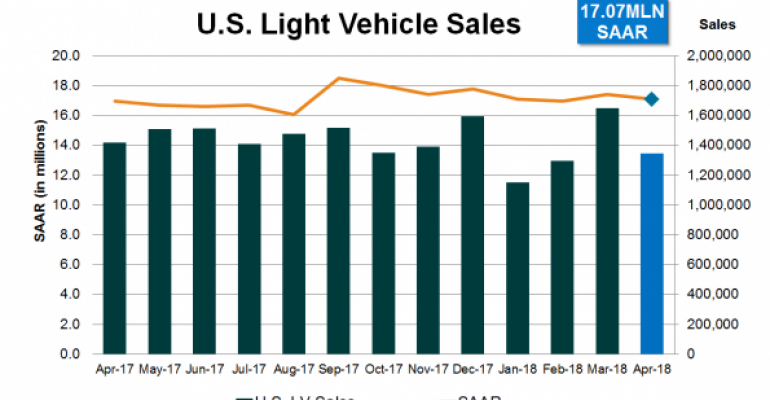 Higher incentives in April were seen despite dealers having a much more favorable mix of strong-selling trucks on their lots vs. a year ago.

U.S. light-vehicle sales equated to a 17.1 million-unit seasonally adjusted annual rate in April, making it the ninth straight month to meet or exceed the 17 million level, and generally carrying forward the solid first-quarter results of 17.2 million.

The total was in line with expectations despite a severe downturn at Nissan, as well as an overall decline in the retail portion of April’s total that overwhelmed a slight increase in fleet volume.

Year-to-date volume though April totaled 5.435 million, slightly above four-months 2017’s 5.428 million. With an extra selling day over last year in May, as well as an additional weekend in June, year-to-date volume easily could remain above year-ago through the first half of the year.

However, the market still has more headwinds to contend with than a year ago, exemplified by incentives continuing to rise faster than average transaction prices. Some of the headwinds include higher fuel prices and interest rates, stronger competition from late-model used vehicles, a lack of excess pent-up demand and continued low penetration of newer vehicles in the inventory mix.

The higher incentives also are being seen despite dealers having a much more favorable mix of strong-selling vehicles, namely trucks, on their lots vs. a year ago.

Nissan’s DSR declined 22.1% from April 2017 and was its third straight downturn. The automaker’s 6.5% market share in April was its lowest monthly total since April 2012.

Market leader General Motors recorded both its second straight year-over-year increase for DSR – up 5.4% – and higher market share; 17.6% vs. year-ago’s 17.2%. GM’s increase was led by strong results in pickups, including a whopping 29% increase by the Chevrolet Silverado, which had shown some weakness early in the year.

GM’s CUV sales, led mostly by its newer products in the segment group, increased 17.3% from last year, and its SUVs were up 25.0%.

Besides Nissan, declines were posted by Honda, Hyundai and Tesla.

Sales of domestically made LVs increased 1.4% in April, but their year-to-date total remained 1.1% below January-April 2017. Import volume increased 8.2% last month and was up 4.6% year-to-date. April’s import penetration of 23.0% was more than an entire percentage point above like-2017, and was the highest for the month since 2011.

By segment group, Small Car and Middle Car declined 14.7% and 19.9%, respectively, in April from year-ago. Luxury Car declined 9.2%, but the small-volume Middle Luxury and Luxury Specialty segments increased in April and year-to-date volume for both also are up. The Large Car segment, which accounts for only 1.4% of the market and is mostly driven by fleet demand, increased 18.0% in April, but is down 14.2% year-to-date.