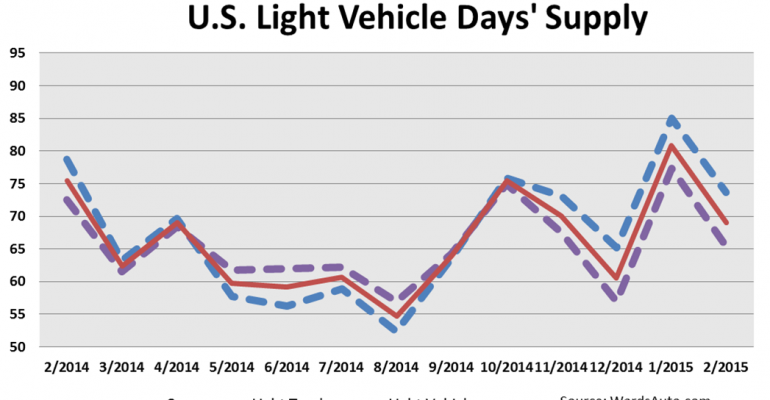 For the second straight month in February, U.S. light-vehicle inventory ended below year-ago, even widening the gap from January.

The downturn came despite sales in the month finishing below expectations, meaning fewer vehicles were drained from dealer lots since January.

Part of the downturn can be attributed to Honda losing an estimated 25,000 units of production during the month thanks to parts shortages caused by labor issues at West Coast ports. However, inventory also might have been capped from possible production shortfalls at other manufacturers, as well as a slowdown in import shipments caused by the port issue.

LV days’ supply ended at 69, typically a healthy level for February and below year-ago’s 75.

However, inventory of both domestically made vehicles and imports ended February below year-ago. Domestic stocks totaled 2.965 million, 2.2% below year-ago and for the first time since October 2011 they finished short of the prior-year total.

Import inventory, which has been trending downward due to more local sourcing for the North American market, totaled 637,000, 9.1% below year-ago. Import stocks have been running short of prior-year totals since June 2014.

Inventory overall is enough to support much stronger sales than the 16.4 million seasonally adjusted rate for January-February combined, but there are shortfalls in some strong segments.

Heading into March, inventory of Middle CUVs, the market’s biggest segment, was down 5.9% and the Large Pickup sector was off  9.7%, including for all three of the major players: General Motors, Ford and FCA US. The inventory downturn in the two segments comes on the heels of year-to-date 2015 sales gains of 11.0% for Middle CUV and 12.2% for Large Pickup.

Ford, GM, Honda, Hyundai, Mitsubishi, Subaru and Toyota all were short vs. year-ago in Middle CUVs. Honda, with total inventory down 8% from year-ago, ended February with Middle CUV inventory down 27% below year-ago. Combined January-February sales of Honda’s Middle CUVs rose 32% from like-2014.

Thus, industry deliveries in March could face some headwinds.

On the plus side, inventory is strong in other CUV segments, small vans and small pickups. Also, small cars, which traditionally record higher market penetration in March vs. February, had inventory above year-ago totals.