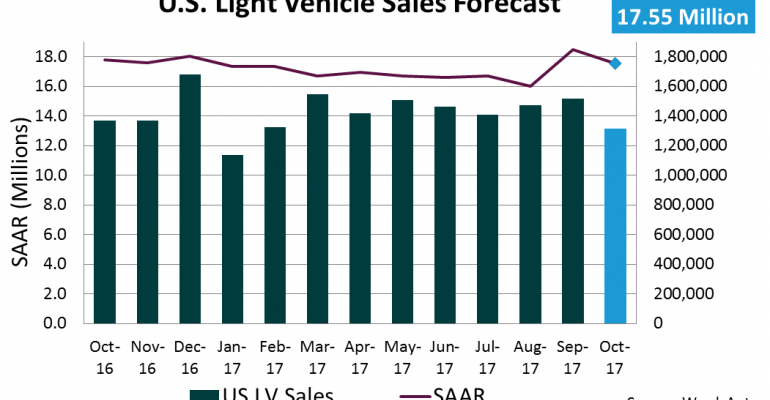 The DSR is 9.9% below the prior month, a greater drop than the 8.8% 7-year average downturn between the two months because September 2017 sales were exceptionally high.

The report puts the seasonally adjusted annual rate of sales for October at 17.55 million units, behind year-ago’s 17.80 million and prior-month’s 18.48 million mark.

At forecast levels, October LV sales would bring the year-to-date total to 14.1 million units, down 2.1% from same-period 2016.

September’s sales reduced a significant part of the excess inventory heading into the month. However, inventory still remained 10% to 15% above the estimated optimum level needed to meet current demand. Stocks totaled 3.76 million units, a record high for the month, and 1.9% above like-2016.

WardsAuto expects inventory at the end of October to sit at 3.81 million units, down 0.9% from prior-year. At the forecast sales rate, this results in a 72-day supply. A figure in the low 70s is a good level for this time of year if sales in November and December average an expected 17.5 million-unit SAAR.

Demand in the fourth quarter is expected to start out strong and remain so if excessive inventory remains an issue. Replacement demand is expected to continue into November, though the impact should be smaller.

WardsAuto forecasts full-year sales just above 17.0 million units, but the final total will depend on how much automakers are willing to use incentives for inventory control during Q4.