It's the best-ever performance by Detroit automakers in the history of the J.D. Power Initial Quality Study.

It’s not unusual for Kia to do well in the quality study. The South Korean automaker has had “an exceptional run,” Dave Sargent, J.D. Power’s vice president-automotive quality, says during an online media briefing. “Kia has cracked the code for what U.S. consumers want, and how to make it work and easy to use.”

Kia’s standing today contrasts with when it entered the U.S. in 1992 as a wannabe with one econobox sold at four Portland, OR, dealerships.

This year, for established domestic brands to rank so well after some rough quality-issue eras is unprecedented. Collectively, this is the Detroit automakers' best-ever performance in the survey's history.

In past years, Japanese automakers had dominated the list. “That’s not the case anymore,” Sargent says.

Once regarded as the gold standard of vehicle quality, most Japanese brands have not improved as fast as their competitors have, and they continue to trail most Korean and domestic nameplates, the survey indicates. Mitsubishi, Lexus and Nissan are the only Japanese brands to rank above industry average.

The study, now in its 34th year, examines problems experienced by owners of new vehicles during the first 90 days of ownership. J.D. Power surveyed more than 87,000 verified vehicle owners online between February and May.

Initial quality is determined by the number of reported problems per 100 vehicles (PP100), with lower scores reflecting higher quality. (See chart at bottom for the full by-brand ranking.)

Surveys of past years had tended to focus on powertrain problems. These days, owners complain more about technology issues ranging from infotainment to driver-assist systems, with ease of use a big factor in their satisfaction ratings.

“Consumers get more and more demanding every year,” Sargent says. “The expectation that a vehicle won’t go wrong is a bare minimum, and automakers have gotten good at that.”

Among key findings of the 2020 survey:

General Motors'  China plant (which produces the Buick Envision) receives a platinum award for producing vehicles with the fewest defects or malfunctions.

“The fact that the top plants in each region are outside of the traditional (vehicle production) areas of the U.S., Canada, Germany, Japan and Korea is a sign of just how global the auto industry has become,” says Doug Betts, J.D. Power’s president-automotive division.

That said, he adds, “No one is making a perfect car with zero problems.” 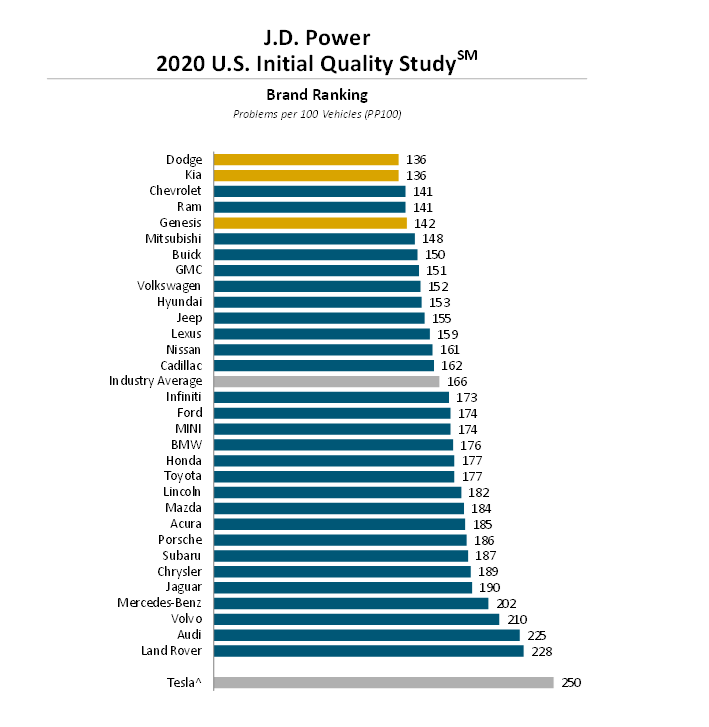