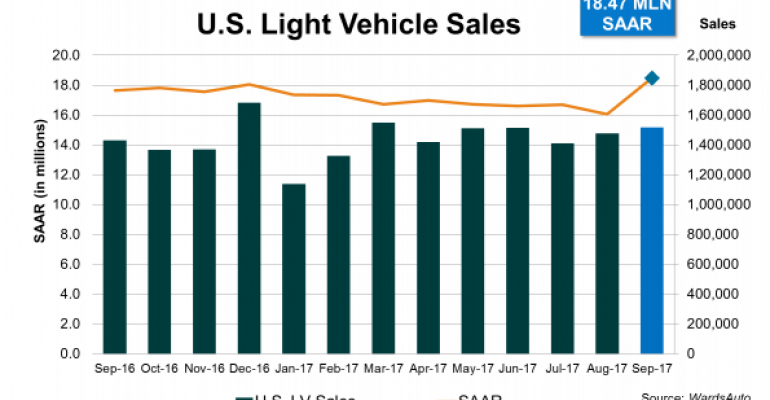 The industry&rsquo;s September retail push caused even both the raw volume and daily selling rates to post gains for the first time this year.

A long-awaited inventory sell-off of U.S. light-vehicles finally occurred in September, as the seasonally adjusted annual rate topped 18 million for only the second time since the industry exited the recession in 2009.

Helping was a partial recouping of the estimated 30,000 units of lost sales in August due to Hurricane Harvey. However, rising incentives caused by bloated dealer stocks was the main impetus to the surge.

The industry’s largess even caused the raw volume total and the daily selling rate to each post year-over-year gains for the first time this year. September’s total deliveries of 1.52 million units equated to a DSR of 58,298 over the month’s 26 selling days, 1.9% above same-month 2016’s 57,188 (25 selling days).

With inventory running 15%-20% higher than necessary in recent months, the sales surge, along with an estimated 8% year-over-year downturn in North American production in September, let the industry cut a good portion of the excess just as the ’18-model-year is beginning.

Precipitating the surge was General Motors goosing demand in August to pare inventory. With a few exceptions, such as Toyota, volume got yanked from the rest of the industry, skewering market shares and worsening inventory levels.

With GM, and to a lesser extent Toyota, still looking to bring down inventory levels, the rest of the industry reversed course in September.

According to ALG, industry incentives hit a record high, while average transaction prices declined year-over-year for the first time since last November. The selloff even increased the industry retail portion by an estimated 6% over like-2016 – the biggest increase this year – while fleet deliveries declined for the third straight month.

Still, inventory likely ended the month roughly 10% in excess of where it should be to meet underlying demand. The remaining excess sets up another possible sales surge, probably in December, though not as likely to be as huge as September’s spike because of continued production cuts in Q4.

Toyota’s September share marked the third consecutive month it topped 15% and remained the No.2 volume seller in the U.S. topping Ford during that stretch.

Declines were posted by BMW, Daimler, FCA US, Hyundai, Mazda and Subaru. Subaru’s drop was its first since March 2016 and likely results from its incentive rollback in September.