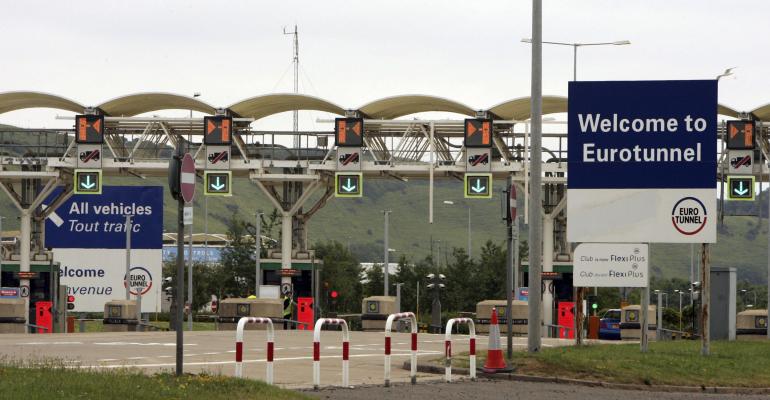 A paper setting out proposals for a future customs relationship with the EU backs a system that aligns the U.K. approach to remove the need for a U.K.-EU customs border.

The U.K. government wants to continue some existing arrangements with the European Union, reduce or remove barriers to trade through new deals and adopt technology-based solutions to make it easier for businesses to comply with customs procedures.

A paper setting out proposals for a future customs relationship with the EU backs a system that aligns the U.K. approach to remove the need for a U.K.-EU customs border.

The document highlights the U.K.’s strong starting position and how it can build on that foundation through two broad approaches – a highly streamlined customs arrangement between the U.K. and the EU, with customs requirements that are as frictionless as possible.

It’s the latest move in a high-stakes poker game with Brexit negotiators. At stake is a jackpot of £553 billion ($710.7 billion) – the value last year of U.K. trade with the EU.

“The automotive industry needs certainty to attract investment and make planning decisions, so such a move – if agreed by the EU – would take some pressure off these difficult negotiations,” Society of Motor Manufacturers and Traders CEO Mike Hawes says.

A government statement says one potential approach would involve the U.K. mirroring the EU’s requirements for imports from the rest of the world where the final destination is the EU.

The paper includes a proposal for an interim period with the EU. This would mean close association with the EU Customs union for a time-limited period to ensure U.K. businesses only have to adjust once to a new customs relationship.

Secretary of State for Exiting the EU David Davis says the proposals would benefit both the EU and U.K. and avoid a cliff-edge for businesses and individuals on both sides.

“The U.K. is the EU’s biggest trading partner, so it is in the interest of both sides that we reach an agreement on our future relationship,” Davis says. “The U.K. starts from a strong position and we are confident we can deliver a result that is good for business here in the U.K. and across the EU.”

International Trade Secretary Liam Fox says that as the U.K. leaves the EU and establishes an independent trade policy, the government will prioritize ensuring the U.K. and EU businesses and consumers can continue to trade freely with one another as part of a new free-trade agreement.

Freight Transport Assn. Deputy CEO James Hookham calls the paper a step in the right direction, but warns the ambitions laid out in the document are far from guaranteed and will require some careful negotiations.

“The government has recognized that it cannot drive the British economy off the cliff edge of Brexit,” Hookham says in a statement. “(Securing) the best possible deal for British business will take skill and understanding of how trading relationships work, in order to obtain the buy-in of the rest of the EU27 countries, as well as the EU’s own bureaucrats.”

He says the FTA urges the government to include representatives of the sector, with specialist knowledge, at the negotiating table to help reach the best possible deal for Britain.

“The government’s ambitions for customs arrangements post-Brexit are, at present, just that, and it will take time and care to ensure that all the subtleties of current operations can be incorporated into future plans,” Hookham says. “The government owes it to British trade and industry to work with us to ensure that these arrangements can be introduced as part of the final Brexit deal.”

Hookham says no trade deal will succeed unless freight and logistics requirements have been factored into any discussions between the EU and the U.K.

Rod McKenzie, director-policy and public affairs for the Road Haulage Assn., says his group has argued consistently for frictionless borders post-Brexit and has been calling for a deal that allows free and unfettered movement of goods across EU member states after March 2019.

“We've been desperately worried about the U.K.’s supply chain being disrupted by Brexit,” McKenzie says in a statement. “(The) news is encouraging, but we will carefully follow the details to ensure we get the best possible customs arrangements for the U.K. haulage industry.

“If we don’t get this right, people will see empty supermarket shelves and huge traffic jams around the ports.”