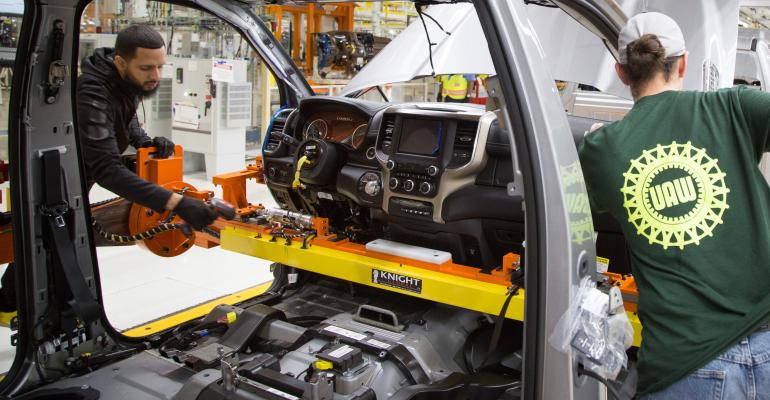 Ford and FCA plan to open plants by mid-April. Meanwhile, the Detroit Three OEMs, with UAW approval, have asked for volunteers from among blue-collar employees to keep open their parts warehouses across the country.

Under pressure from nervous union members, the United Auto Workers is grappling with fallout from the pandemic created by the lethal spread of COVID-19.

“The UAW continues to review with great caution and concern decisions being made about restarting workplaces, especially at advanced dates,” Gamble said in a statement.

“These decisions should be informed by data and where each state is on the contagion curve. The UAW maintains that strict CDC guidelines need to be adhered to at all worksites, and that prior to reopening sufficient data and protections are in place to ensure the safety of our members, their families and the public.

“The only guideline in a boardroom should be management asking themselves, “Would I send my family – my own son or daughter – into that plant and be 100% certain they are safe?” Gamble said after Ford and FCA outlined plans to resume production after what would amount to an unplanned, four-week shutdown. GM has not yet said when it intends to reopen its plants.

Brian Rothenberg, the UAW’s communication’s director, said the health and safety of its members is the union’s top concern. Four FCA workers have died from the virus, according to the union.

Cases of the novel coronavirus also have been identified among workers at Ford and GM and in plants operated by big suppliers such as Nexteer, American Axle, Dana and Lear, union officials said.

“My personal opinion is it’s probably too soon to go back to work,” added Houdelson, who filed a health and safety grievance protesting the conditions at the Chicago plant before Ford agreed to shutter temporarily.

“I want to know what policies are being put in place to protect workers,” said Houdelson, adding he believes the UAW has to be more aggressive in protecting the health of workers.

Houdelson said the high-level task force Gamble and the companies set up earlier this month only served as cover for the automakers, who wanted to keep building vehicles despite growing spread of the virus.

Houdelson noted workers are deployed in small spaces where coming into contact with each other is common. “At shift change, you have 1,000 people coming through two gates,” he noted.

Jesse Ramirez, president of UAW Local 230, which represents workers at a Mopar Distribution Center in Los Angeles, wrote to FCA CEO Michael Manley, congratulating him for his decision to shut down the company’s manufacturing plants.

But he represents members who live in California where there is a “stay-home” order that will last until April 19. “All our children’s schools have been canceled, many of our members are without day care and members 65 and older are fearful they might contract COVID-19,” Ramirez said.

GM, Ford and FCA, with UAW approval, have asked for volunteers from among blue-collar employees to keep open their parts warehouses across the country during the unfolding pandemic.

The UAW has negotiated a special agreement that allows them to deliver service and repair parts to dealers and customers, including police and fire departments and emergency service providers.

The union stressed the warehouses now are staffed by volunteers during the emergency. Employees who elect not to work will be eligible for unemployment compensation and sub-pay as required by the union contract with the automakers.

Overtime and special assignments usually are based on seniority, with longtime employees eligible first for extra hours for extra pay. The reliance on seniority has been waived for the emergency.

Rothenberg said the union has spent recent weeks negotiating with GM, Ford, FCA and dozens other employers, large and small, to ensure workers get unemployment pay and health care. “Each of them is different but we will approach it contract by contract,” he said.

Under the labor contracts signed last fall after a 40-day strike at GM, full-time employees at all three companies are eligible for health-care and supplemental employment benefits.

Temporary workers, however, could find their hours cut. In addition, temporary workers, if they remain out of work past April 30, could lose their health insurance and the time in the plant they need to become eligible for full-time employment. When they finally return to work, they could start back at Day One in building eligibility for a full-time job with the company.