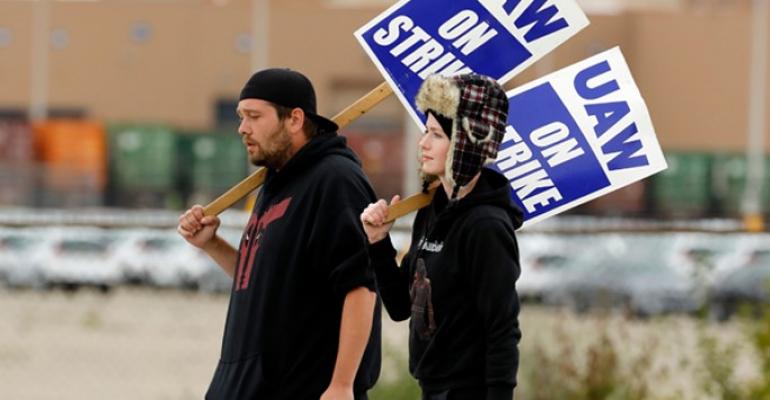 Union leadership voted Saturday to increase strike pay by $25 per week to $275 per striking worker. The increase had been scheduled for Jan.1 but instead took effect Sunday.

A month into the UAW strike against General Motors, negotiations to end what has become an increasingly costly dispute remain deadlocked after an exchange of proposals by the company and union.

The exchange of broad proposals highlighted a week punctuated by sharp exchanges between the UAW and GM that involved GM Chairman Mary Barra as well as top negotiators for both sides. The activity produced no discernible movement.

Gerald Johnson, GM executive vice president-manufacturing, said in a letter to striking employees the automaker wanted to see the dispute, which has cost the company more than $1.6 billion, resolved as soon as possible.

Countered Terry Dittes, the UAW’s top bargainer: “Since the beginning of this negotiation, GM has not taken the issues of our more than 48,000 members seriously. In fact, at every step of the way, GM has attempted to undermine the ongoing, good-faith efforts the UAW has made to end this strike.”

The union voted Saturday to increase strike pay by $25 per week to $275 per striking worker. The increase had been scheduled for Jan.1 but instead took effect Sunday.

It also cleared the way for strikers at General Motors and outside contractor Aramark, which represents maintenance workers at plants in Michigan and Ohio, to work part-time or temporary jobs with no reduction in their strike pay as long as they perform their picket duty. In the past, strike pay was reduced if strikers took part-time work.

Morale among striking union members remains high, according to local union officers. Louis Rocha, president of UAW Local 5960 in Orion Township, MI, says the general public has been very supportive of the walkout. Donations of food and other supplies have helped Local 5960 open a “strike kitchen” offering free meals. At UAW Local 22 in Detroit, strikers have been able to pick up food baskets.

Meanwhile, the UAW on Sunday launched another major strike, this one involving 3,600 union members at heavy-truck maker Mack Truck. The union sounded many of the same themes it has used during the GM strike, which began Sept. 16.

“The last four years we have helped Mack Truck make significant profit through our work,” says Doug Irvine, president of Local 2301 and president of the UAW’s Mack Truck Council. “All we are asking is that the company treat us with the dignity and respect we deserve in making them successful.”

Much like their counterparts at GM, Mack executives insist they are working to maintain manufacturing in the U.S.

“Mack Trucks is part of the only heavy-truck manufacturing group that assembles all of its trucks and engines for the North American market here in the United States and continues to compete against products built in lower-cost countries,” Mack President Martin Weissburg says in a statement.

“We have no plans to close any U.S. manufacturing; on the contrary, we’ve invested more than $400 million in our plants and logistics network over the last 10 years, and since 2015 have insourced work that has created more than 500 jobs in our U.S. factories. We have significant new investments in both facilities and products on the way,” he says.

At GM, the company and union continue to wrestle with core issues including wages, the status of temporary workers and job security, which the union has defined as specific investment and product-allocation commitments that would maintain GM’s current manufacturing footprint in the U.S., according to Harley Shaiken, a labor expert at the University of California-Berkeley.

The union also is looking for a way to cap GM’s investment in Mexico and reverse the allocation of new products to GM’s Mexican plants to help ensure U.S. plants get new vehicles to build, he says.