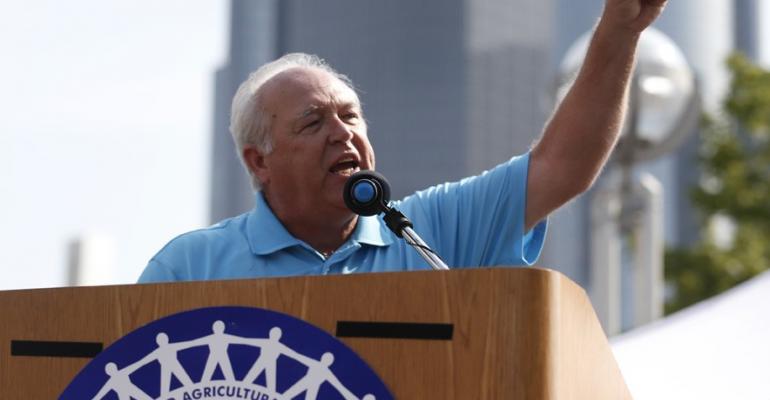 Over the years, the union has maintained a running critique of NAFTA as automakers and suppliers have moved work to Mexico to capitalize on lower wages and looser regulations than are in place in the U.S.

NAFTA has cost the U.S. as many as 500,000 auto-related jobs, UAW President Dennis Williams says, which is one of the reasons why the union endorses President Trump’s vow to overhaul the trade deal.

“NAFTA is very important to us,” Williams says, noting the UAW has been critical of the deal eliminating tariffs on goods shipped between the U.S., Canada and Mexico since it was first proposed back in the 1990s. Over the years, the union has maintained a running critique of NAFTA as automakers and suppliers have moved work to Mexico to capitalize on lower wages and relaxed regulations there.

Williams expresses opposition to Trump’s selections to head up the U.S. Department of Education and the EPA, both of which have won Senate approval.

However, the union chief endorses Trump’s willingness to tackle the trade issue: “He is the first president that’s addressed this issue and I give him kudos for that. If it benefits American workers and American communities, great.ˮ

Revising NAFTA won’t be a simple task, the UAW chief says.  A “border tax” could have a major impact on currencies such as the Mexican peso. “It could affect the currency to the point where (Mexico still has ) cheaper labor,” Williams says.

There also should be new rules to make unions stronger so they can help improve Mexican workers’ living standards, he says.

At one point during the discussion, he seems to suggest he would rather see consumers purchase a Toyota built by nonunion workers in Kentucky than a Ford or GM product built outside the U.S. “My first choice is to buy a union-made (vehicle), but the second choice is to buy one built in the U.S.,” Williams says.

Both Williams and Cindy Estrada, the head of the UAW’s GM department and one of Williams’ key lieutenants, attacked a Super Bowl ad GM ran during the Super Bowl that emphasized cars built in South Korea and Poland.

“I think there is a movement going on in this country – ‘If it’s not built in the United States, don’t buy it.’ We’re seeing a trend in the country of boycott(ing) coming back, and if it does, it will have a dramatic impact on corporations. I think people now know how trade impacts their lives,” he says.

The UAW ad campaign still is in the planning stages.

“I thought it was a good decision to kill (U.S. participation in) TPP,” Williams says of the proposed Trans-Pacific Partnership, a multi-nation trade deal Trump pulled the U.S. out of shortly after his inauguration in January.

Williams notes there are 21 assembly plants in Mexico and says, “If you look at the percentage of those vehicles that are imported into the United States, 17 of those plants should be in the U.S.”

Using a standard multiplier favored by economists and development experts estimating each auto job indirectly can support seven other jobs, building 17 plants in the U.S.would have supported up to 500,000 jobs, he says.

The result of unfair trade is a diminished tax base that has left the U.S. with poor-quality schools, stagnant wages and crumbling infrastructures, Williams says.

Leaving the U.S. open to imports from all over the world also has left American workers vulnerable to a deregulated financial system. “We’ve got over 45 million people living in poverty,” Williams says, citing U.S. Census figures. “I think companies have to step up and start being more responsible as American citizens.”

Williams also says he’d like to see automakers held to the goals set by the government under CAFE legislation.

“The EPA got a little bit aggressive and I think that was a mistake, (but) I think it would be a fundamental mistake to walk away from the principles of CAFE. They can’t walk away from those issues,” Williams says, adding he believes environmental regulations contribute to job creation.