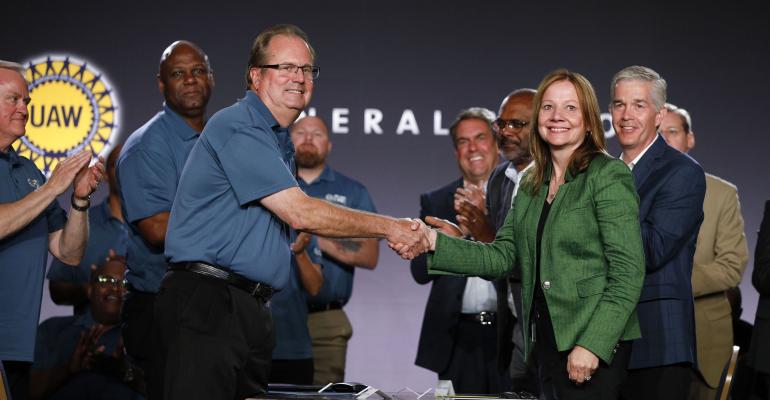 Strikers have zeroed in on the compensation of GM CEO Mary Barra, who receives $22 million per year while temporary workers make as little as $12 per hour in some instances.

Barring a surprise settlement, the UAW’s strike against General Motors appears headed for a second week as company and union bargainers search for a formula that would resolve the dispute.

The walkout, which is costing GM an estimated $50 million per day, is becoming a tale of two competing narratives.

On the one hand, GM argues it is offering a generous settlement, which includes a pay increase and an $8,000 ratification bonus. The average blue-collar GM employee received $95,000 last year, not including health and insurance benefits, GM officials say privately.

Employees in the skilled trades who work in highly automated stamping, transmission and engine plants can make six-figure salaries.

In addition, GM was prepared to offer the UAW a piece of its electrification strategy by building a plant for battery cells, a first, and by producing an electric truck in the U.S. That offer took on new urgency with Amazon’s announcement last week that it planned to purchase 100,000 from Rivian, a start-up company that has yet to build a single production electric vehicle.

A federal embezzlement investigation, which has led to guilty pleas to felony charges by a handful of union officers and officials, appears to have weakened the union. UAW President Gary Jones, who has been implicated in the scandal, has kept out of sight since the strike started Sept. 15, and another member of the UAW executive board, Vance Pearson, will be arraigned next week on federal felony charges in Detroit.

But strikers have zeroed in on the compensation of GM CEO Mary Barra, who receives $22 million per year while temporary workers can make as little as $12 per hour in some instances. Thirty years ago, then-Chairman Roger Smith made $2.2 million, meaning the compensation for GM’s top executive has risen tenfold in the past three decades. Compensation for salaried GM workers has gone from $17 per hour to $31 per hour over that period.

The union has sought to frame the strike as a struggle for fairness and equity after helping rebuild the company and its reputation in the years since the 2008 recession. Support for temporary workers, who make roughly $17 per hour but are not eligible for profit sharing and receive reduced health-care benefits, have widespread support on the picket line, putting more pressure on bargainers.

“I would like to thank our members at General Motors for your courage and determination as you strike for a contract that is worthy of the efforts that you make each and every day. General Motors’ profits were made because of your intelligence, commitment, sweat and hard work,” Chuck Browning, a member of the UAW’s executive board, said in a letter to union members in suburban Detroit.

“Your willingness to fight for a fair contract has impact far beyond your own personal benefits. Your action will directly benefit members at Ford and FCA, members throughout the UAW community and the entire working class that exists in our country today,” he added.

“I just returned from the picket lines at the GM Parts Distribution center in Bolingbrook, IL,” Scott Houldiesson, a Ford employee and UAW activist, notes in a Facebook post. “Spirits are high. They had a lot of folks from other unions and community groups there supporting them as well.”

The UAW also has won support from Democrats ranging from Michigan Gov. Gretchen Whitmer to members of Congress and every presidential candidate hoping to unseat Donald Trump in 2020.

Steven Greenhouse summed up the issues animating support for the GM strike in his new book about organized labor, “Beaten Down, Worked Up.”

“The share of national income going to business profits has climbed to its highest level since World War II, while the workers’ share of income – employee compensation, including benefits – has slid to its lowest level since the 1940s,” Greenhouse writes.