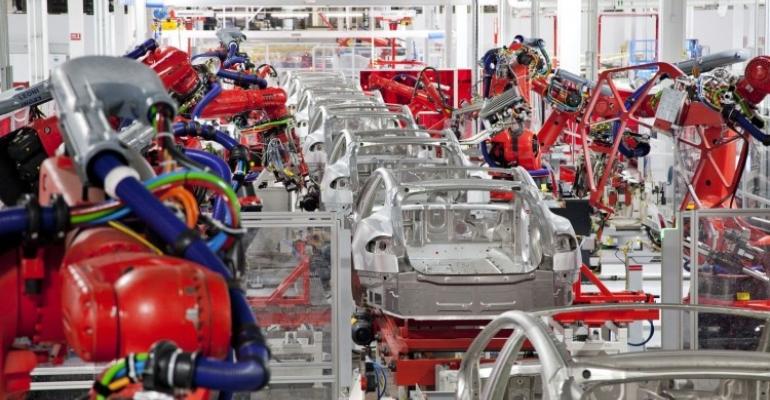 As production volume and the pace of work increases, something Tesla founder Elon Musk has promised will happen, the number of injuries also is likely to rise without changes in the plant, workplace-safety expert Doug Parker says.

In its bid to organize workers at the Tesla assembly plant in Fremont, CA, the UAW is zeroing in on workplace injuries as a key issue and appears to be picking up advocates along the way.

The UAW tapped worker-safety expert Doug Parker, executive director of Worksafe, a California nonprofit that advocates for better health and safety protections for workers, to study injury reports from the Fremont plant and to train organizers working on the effort to bring Tesla employees into the union.

Worksafe’s study indicates annual injury rates at the Tesla plant consistently have exceeded industry averages. That conclusion is based on U.S. Occupational Safety and Health Admin. logs companies are required by law to maintain.

In 2015, the last year for which industrywide comparative data is available, Tesla’s overall injury rate was about one-third higher than the industry norm, and its serious injury rate – those involving job transfers or missed days – was well over double the average.

In addition, Tesla’s total recordable incidence rate was 8.8 injuries per 100 workers, compared with 6.7 for automobile assembly plants as a whole.

Tesla’s injury rate for 2016 was 8.1 injuries per 100 workers. While official industrywide statistics are not yet available for 2016, based on the previous three years of industry data it is very reasonable to expect the company’s rates again will surpass the industry average, which has stayed relatively constant over time, Parker says in a conference call with reporters.

With the UAW drive picking up momentum, Tesla is beginning to feel the heat.  Management has stepped up its efforts to defend its safety record. In recent public statements, Tesla claims “since Jan. 1, our total recordable (injury) incident rate is under 3.3, which is less than half the industry average of 6.7.”

Parker says with Tesla ramping up production there will be a new health and safety environment that will require planning. He says it’s not apparent Tesla is prepared for the challenge because 60% of the injuries are ergonomically related, raising questions about whether assembly jobs are laid out properly or whether workers have the proper tools and protection.

As production volume and the pace of work increases at Fremont, something Tesla founder Elon Musk has promised will happen, the number of injuries also is likely to rise without changes in the plant, Parker says.

“We may have had some challenges in the past as we were learning how to become a car company, but what matters is the future and the changes we’ve made,” a Tesla spokeswoman says. “We now have the lowest injury rate in the industry by far. Our goal is to have as close to zero injuries as humanly possible and to become the safest factory in the auto industry.”

Parker says the UAW contacted him because the union was in the midst of an organizing drive at Tesla, and organizers were encountering many workers with health and safety concerns.

“We conducted workshops with organizers and we met with Tesla employees,” he says. “Workers told us their complaints at Tesla have not been taken seriously in the past. Where workers have a meaningful say, it does help.

“Employees have the right to get copies of a company’s injury reporting records so they can understand the potential hazards at their workplace, and that’s just what workers at Tesla chose to do,” says Parker, a former official with the federal Mine Safety and Health Admin.

An employee identified only as Alan, who participated in the Worksafe study and the conference call, said: “I wasn’t for a union. After my injury, I saw this is happening to a lot of people. With the unionizing (effort), a lot of people are less fearful of being fired for speaking up. They’re already seeing what the union can do.”