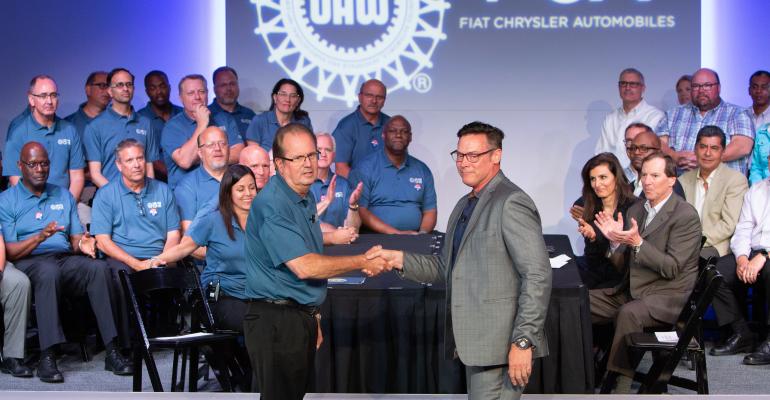 The union’s decision to raise strike pay to $250 per week from $200 was a blunt warning to the companies, particularly GM. But Detroit Three automakers have significant issues of their own, including employee health care costs and the desire for greater job flexibility.

With the potential for a strike higher than it has been in perhaps three decades, the United Auto Workers union officially opens negotiations with General Motors, Ford and Fiat Chrysler with a series of demands that over the next two months will shape the final document.

The automakers, mindful of the record profits likely to color the UAW’s stance, have significant issues of their own to take up with the union. These include the perennial concern over employee health care costs, the need to make wider use of temporary workers and the desire for greater flexibility on the shop floor in the face of unprecedented technological change sweeping the industry.

Concerns over training and retraining have surfaced as a key issue, as has the UAW’s interest in shaping the terms of partnerships, such as the one between Ford and Volkswagen, that promise to alter industry dynamics.

“We want to find innovative ways to prepare for the future,” said Mark Stewart, FCA chief operating officer, who noted the company needs flexibility if it is to continue making job-creating investments in plants where workers are represented by the UAW.

“As we look to the future, it's really important to think about how far we’ve come since bankruptcy. We cannot, we will not repeat those actions that put us in those dangerous financial conditions. We cannot return to our old ways of doing business or we’re risking the same result,” Stewart said.

UAW President Gary Jones says negotiations will be under way on behalf of the 120,000 union members employed at the three companies. After helping save the companies a decade ago, UAW members expect better wages and more job security.

“My UAW brothers and sisters are ready to do whatever is necessary to get the contract that, in this time of record profits, they deserve,” he said during the ceremony at FCA.

“We will protect our work, our job and our way of life,” Jones said as a UAW contingent from Ohio demonstrated outside GM headquarters, calling for the automaker to invest in the recently closed assembly plant in Lordstown.

The UAW has dropped its demands for elaborate job-security measures that led to the creation of the much-criticized job banks of the 1980s and 1990s that essentially paid workers for doing nothing if jobs were eliminated.

Instead, the union wants the companies to commit to major investment in U.S. plants.

Ford, FCA and even GM, which announced in November it was leaving “unallocated” five U.S. and Canadian plants, including Lordstown, noted they have made significant investment since signing the 2015 contract and hired hundreds of new workers.

“Since 2009, we have invested more than $23 billion in our U.S. manufacturing base, and from 2010-2018, GM accounted for 26% of all OEM investment in U.S. automotive manufacturing, according to the Center for Automotive Research,” said GM CEO and Chairman Mary Barra. 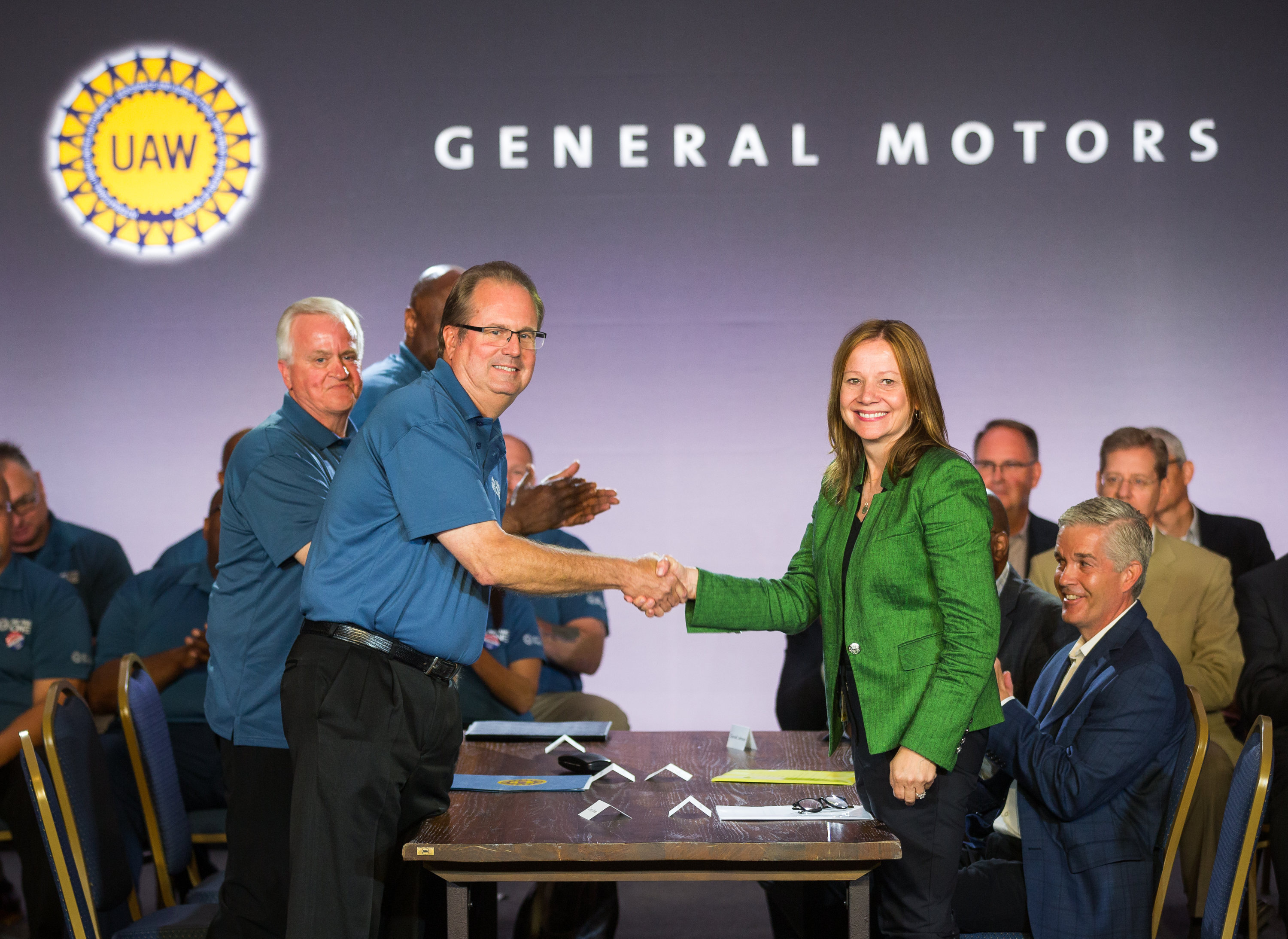 Ford noted during the course of the 2015 contract it exceeded its contract commitments, investing more than $9 billion in its U.S. plants and creating or retaining more than 8,500 U.S. hourly jobs. In addition, some 82% of the vehicles Ford sells in the U.S. are built in the country, significantly higher than any other automaker, noted Ford President and CEO Jim Hackett.

Yet the combined domestic market share of GM, Ford and FCA is under 50% and workers at non-union plants owned by foreign automakers are paid significantly less, according to the Center for Automotive Research.

The UAW’s leadership, meanwhile, is burdened by the scandal surrounding training funds at the joint UAW-FCA training center. The scandal has undercut the authority of the union’s officers.

In 2015, the opening of negotiations at FCA was held at the training center in Detroit, once the bailiwick of the late General Holiefield who, according to federal prosecutors, misappropriated hundreds of thousands of dollars in training funds with help from corrupt FCA officials.

This year, the opening ceremony was moved to the more formal setting at FCA North American headquarters in Auburn Hills. 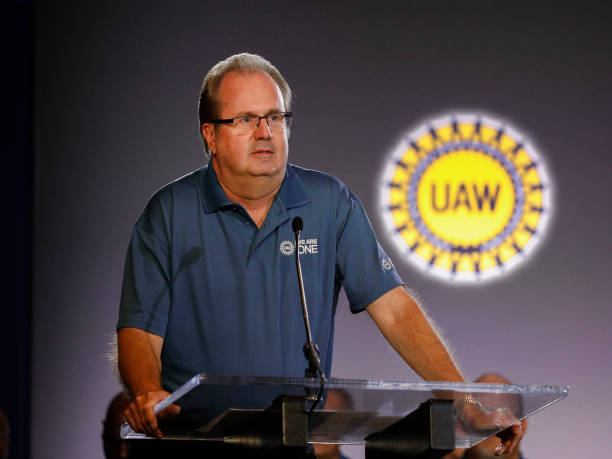 Ironically, with new technology pouring into plants, the need for more training for workers is one of the issues negotiators will have to address in the bargaining, as well as the growing shortage of skilled workers needed to repair sophisticated equipment.

In addition, a restless and younger union membership, as well as contested issues such as automakers’ demands for wider use of temporary workers and the fate of excess plants such as Lordstown, promise to put added pressure on bargainers and raise the possibility of the UAW mounting mount more than a token strike for the first time in years.

The UAW’s decision in March to raise its strike pay to $250 per week from $200 per week was a blunt warning to the companies, particularly GM, at which union officials have been directing most of their wrath.

As it stands, the negotiations are expected to produce a tentative agreement at one of the automakers by Sept. 14 or shortly thereafter. The deal will serve as the pattern for the other two agreements.

The UAW’s contracts with the three companies differ in many respects but the pattern, as it has since World War II, still dictates hourly workers’ wages and health-care benefits.

Brian Rothenberg, UAW director of communications, notes the auto-industry contract talks still matter, despite the broad changes in the American economy. “If you look at what happened the last time in 2015, we eliminated the two-tier wage, and two-tier wages went away in other industries like steel. This is important stuff,” he says.