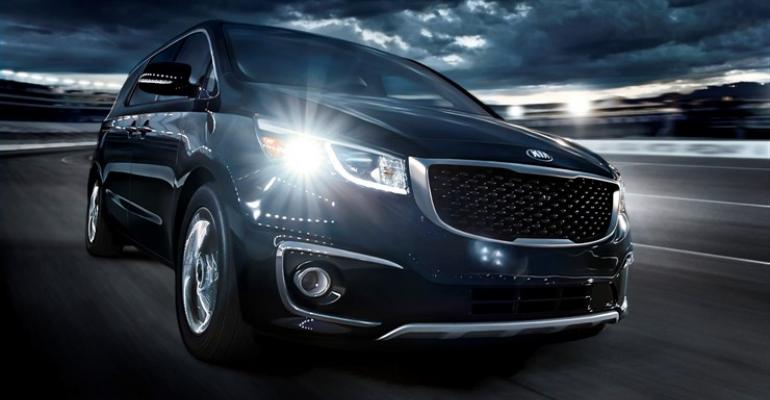 The Korean brand&rsquo;s U.S. executives are finding the public&rsquo;s perception doesn&rsquo;t change as quickly as the speed at which it collects industry accolades.

DANA POINT, CA – Since Kia debuted in the U.S. in 1994, the brand has come a long way from the quality-deficient ’95 Sportage small SUV and Sephia compact car.

In 2012, Kia surpassed the half-million-sales mark and now has entrants available in almost every segment in the U.S., barring pickups.

But executives are finding the public’s perception doesn’t change as quickly as the speed at which Kia collects accolades.

“When I came into the position six years ago, in my head I thought it was going to be about a 5-year period of time to change (Americans’ perception of us),” Michael Sprague, Kia’s chief marketer in the U.S., tells WardsAuto in an interview here. “And it has changed. But I’d like it to go faster. I haven’t gotten everybody yet.”

During a presentation for media, Sprague notes Kia placed third-to-last on ALG’s Brand Perception of Quality study for 2014, just above the discontinued Suzuki brand and Daimler’s flailing Smart.

In the ALG study it also fell behind brands it topped on the J.D. Power IQS, such as Audi, BMW, Honda, Mercedes-Benz, Nissan and Subaru.

“The reality is it’s almost a complete inverse, we're above all those brands,” Sprague says. “So this is a challenge we continue to face. As the head marketer my biggest challenge is to change the perception.”

Kia, being the newest mass-market brand in the U.S., hasn’t benefited from the elevation in opinion that usually comes with a new brand entering the market, says a brand official who doesn’t wish to be quoted. The official notes Hyundai’s positive perception increased when Kia arrived, as did Honda’s when Hyundai launched U.S. sales in the late 1980s.

To get through to people who don’t believe Kia has improved quality, or any of the other attributes for which it’s been recognized, Sprague says he is employing all the marketing tools he can.

“It’s doing ride-and-drives at the auto shows, it’s showing up at food-and-wine events with vehicles like the K900 (luxury sedan), it is (participating in) motorsports to influence those all-important enthusiasts,” he says, rattling off a list of ways Kia is trying to transform the opinion of it by potential buyers.

Traditional advertising on television also still plays a role in getting the message out.

“Back to the perception issue, I’ve got a big audience out there (with the NFL pregame show) and if I can showcase my new product, hopefully that’s going to help translate to people looking at us a little differently. (Maybe viewers will say), ‘Wow, if they can be on this, maybe this is a brand that really has arrived and that I should consider,’” Sprague says.

The NFL pregame show replaces Kia’s sponsorship of NBC’s singing talent show “The Voice,” which it bowed out of due to declining ratings.

Kia is not totally out of music-related advertising – Sprague notes it still sponsors the YouTube Music Awards and aired ads during August’s MTV Video Music Awards – but sports is playing an even bigger role in the brand’s marketing plan.

“Sports still is the one thing consumers are watching in real-time,” he says of why it makes sense for the brand to put its ad dollars in the genre.

Kia remains the “official automotive partner” of the NBA and LPGA in the U.S.

The Korean brand will be heavily touting the new Sedona multipurpose vehicle on those NFL pregame shows this month.

The dark, moody commercials that use the tagline, “It’s not a sports car, it’s a Sedona,” replace those for the new Soul EV, which were in heavy rotation last month in the U.S. and are taking a broadcast-TV break until spring.

Sedona spots will continue airing through October on TV and on digital platforms, until Kia commences holiday and national-sales-program ads late this year and early next year.