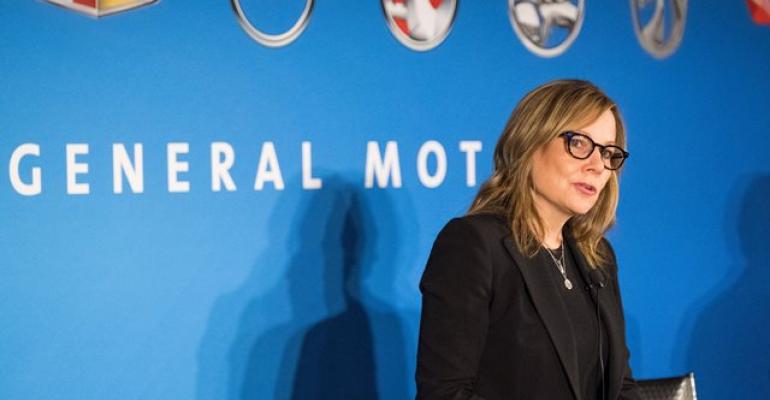 Chief Financial Officer Chuck Stevens says the automaker&rsquo;s dialogue with the Trump Admin. includes a strong desire for tax reform that improves the competitiveness of companies.

“By almost any measure, 2016 was a great year for our business,” GM Chairman and CEO Mary Barra tells Wall Street analysts during a conference call to discuss earnings of $9.4 billion, a shareholder windfall that included $4.8 billion in stock buybacks and dividends, as well as record profit-sharing to hourly workers of $12,000. It was down 2.7% year-over-year on currency-exchange headwinds. Shares of the automaker’s stock tumbled more than 5.0% after the report was issued.

But it was Trump that loomed largest over discussion of the GM report because of uncertainties regarding corporate-tax structures and tariffs on vehicles imported into the U.S., two potential industry-shaking policy changes he has suggested since his presidential campaign first got legs one year ago in the New Hampshire primary.

“GM continues to share job-creation ideas and industry information with lawmakers to help them create proposals that will be positive for the U.S. economy and keep vehicles affordable,” Stevens says during the conference call.

Corporate-tax reform, which almost would undoubtedly work in GM’s favor on items such as reduced taxes on balance-sheet cash, is juxtaposed against Trump’s proposal and legislative calls for a tax of 20% or higher on vehicles imported to the U.S. by automakers. The president has said in meetings in recent weeks with GM, Ford and FCA US that his administration is focused on repatriating car and truck production back to the U.S. from Mexico, where automakers enjoy significantly lower labor costs.

“Within the topic of tax reform, border-adjustment taxes (are) an area that has drawn the most attention and speculation,” Stevens says. “At this stage, there is significant uncertainty as to what proposals will actually be enacted.”

Stevens says GM thinks it is in an industry-leading position if Trump implements his border-tax proposals.

“If current proposals are enacted, we expect to be less affected than some others,” Stevens says.

Barra joined Ford CEO Mark Fields and FCA US CEO Sergio Marchionne in a meeting with Trump on Jan. 24. Barra met again with Trump’s advisers last week as part of her work on the President’s Strategic and Policy Forum, which focuses on broader economic and policy issues beyond manufacturing. She says the administration wants input on tax, trade, regulations and the complexities of running a global business in the U.S.

“It’s very constructive dialogue and the administration (is) really listening to the input that we have and putting things in context,” she says.

But specifically regarding a border tax, which would dramatically alter the 23-year-old NAFTA pact with Mexico and Canada, she says automakers imparted to Trump the industry’s complex supply chain operating back and forth over the borders and the capital-intensive, long-lead nature of the business.

“I think that understanding has been well received,” she says. “Clearly, there’s a lot of moving pieces right now and that’s why we are at the table and also working at all levels of the administration to make sure we’re providing the input.”

Barra says automakers also have made it clear that any shifts to their manufacturing footprints must occur over time, or it will place tremendous risk on existing U.S. jobs.

But the industry's voice within the president's circle may not soothe investor anxiety at a time when automaker stocks are considered undervalued. One prominent hedge-fund manager recently characterized Trump as "high volatility, and investors generally abhor volatility and shun uncertainty."

As for GM’s full-year financial report, it gleamed with a 9.2% rise in revenue to $166.4 billion and record earnings per share of $6, up 1.5% from last year. GM said earlier this year it expects to improve on those results in 2017. The automaker sold 10 million vehicles worldwide, up 1.2%.

Brisk demand for trucks buoyed 3.04 million sales in the U.S. and deliveries to Chian, GM’s largest market next to North America, were up 7.1% to 3.87 million. The automaker’s Opel-Vauxhall unit in Europe saw sales rise 4.0%, although the U.K. decision to exit the European Union postponed an expected break-even year for the newly restructured operation.