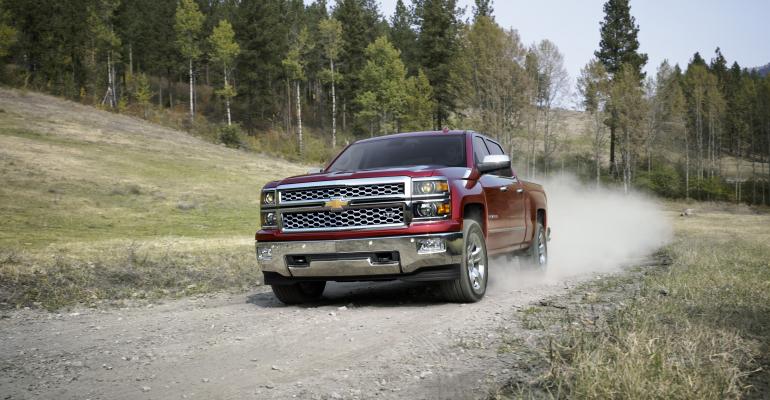 General Motors’ U.S. sales rose 5.9% in April, as buyers continue to flock to the automaker’s recently redesigned trucks and CUVs and make up for slumping car demand.

“At GM, truck and (CUV) sales have been strong all year, thanks to our increasingly deep and broad product portfolio,” Kurt McNeil, vice president-Sales Operations at GM, says in a statement. “The auto industry continues to be on track to have its best sales year since 2006.”

With a number of automaker sales reports yet to be filed today, it appears GM is on track to claim upwards of 18.2% of the market, a sharp rebound from the record-low 16.2% it garnered in March.

GM’s performance in April was in line with a respectable month for the industry, as well as a trend this year of brisk truck- and CUV-buying in the U.S. on the strength of low fuel prices, a rebounding economy and improving consumer confidence.

GM finds itself well-positioned in such an environment with its large pickups and SUVs fresh off a redesign and all-new midsize pickups in the market. Its larger CUVs are longer in the tooth, as are its 5-passenger models, but consumer appetite for the car-like trucks remains strong. The automaker’s all-new entries in the booming compact CUV segment also are drawing demand.

But where there’s strength in the GM report, there’s also weakness. Car sales at the automaker plummeted 12.2% to 87,847, vs. 181,209 truck and CUV deliveries. GM cites a market shift away from cars, fewer rental deliveries and its conservative incentive spending in the segment.

Sales of the Chevrolet Silverado large pickup rose 7.5% to 45,978 last month. Deliveries of the Tahoe large SUV slumped 19.0% against tight inventories and last year’s sell-down of the older model. Volume remained strong at 7,903 units. The Traverse large CUV gained 27.6% to 11,475 and sales of the smaller, 5-passenger Equinox CUV surged 42% to 28,856.

Buick sales tumbled 5.2% to 18,224 last month on industrywide weak demand for passenger cars. And although the Enclave large CUV saw demand soften 4%, deliveries were still a relatively brisk 4,451 units, and the new Encore compact CUV caught 5,587 customers, up 29.4% from year-ago.

However, the Escalade line was the story for Cadillac, as sales of the redesigned large SUV more than doubled to 1,945. Its long-wheelbase model, the ESV, sold 1,292 copies, nearly three times better than year-ago.