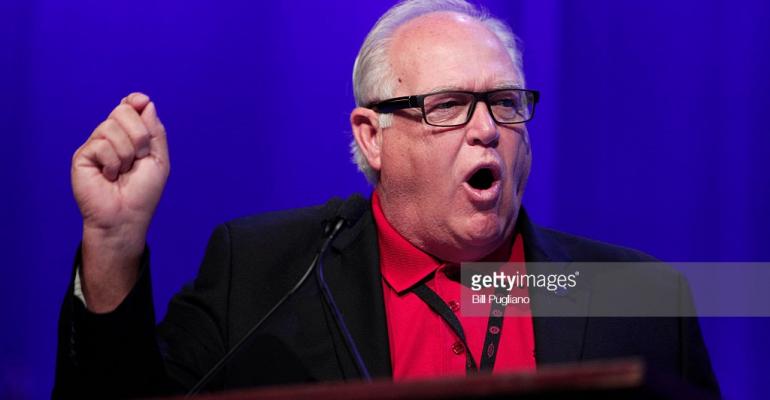 UAW President Dennis Williams says he was pleased to see Trump threaten to slap tariffs on automobile imports. But he opposes Environmental Protection Agency efforts to roll back federal fuel-economy standards imposed by the Obama Admin.

DETROIT – The UAW is actively opposing Detroit’s automakers on two key issues, siding with President Donald Trump on trade and with environmentalists on California’s right to maintain its own clean-air regulations.

Union President Dennis Williams told reporters during a recent roundtable at UAW headquarters here that he was pleased to see Trump threaten to slap tariffs on automobile imports. But he opposed efforts by the Environmental Protection Agency to roll back federal-fuel economy standards imposed during the waning days of the Obama Admin.

“No, I don't think we should roll back those standards. We had an agreement back during the Obama administration. The companies agreed to it. We agreed to it. The environmentalists agreed to it,” Williams said, adding he wanted no part of the Alliance of Automotive Manufacturers position that it wanted one national standard.

“California has always been a challenge,” said Williams, who plans to settle in California after his retirement next month. “If you look at the smog…it’s a major problem. I think other cities are going to start having the same problem.”

Williams noted the UAW has worked with Tom Steyer, a billionaire environmentalist who has staked out a militant position in the fight against climate change. The UAW is “actively looking at things that we can do” that will secure good-paying jobs while protecting the environment, he said.

The UAW president also reiterated the union’s long-standing support for trade policies that would help protect union jobs even when they are promoted by Trump, who is widely viewed as an arch-enemy of organized labor.

“What I have said is, when he is working in the best interests of the working men and women in the country, then we will support him,” Williams said.

“I think the U.S. has become a dumping ground for other countries. I think we should have been looking at imports a long, long time ago. I’m going to watch that. I’m going to be interested in what he’s doing,” he said. “I do think we ought to look after our own sovereignty and economics.”

People are free traders to the detriment of the country, said Williams, who acknowledged Trump is closer to the union position on trade than many – but not all – politicians on the Republican side or even in the Democratic Party.

“I don't know many Republican congressmen aligned with Trump on trade. They have totally ignored the needs of working men and women in this country. When I say we support President Trump on this issue, that’s not reflective of the Republican Party as a whole,” Williams said, noting the union is opposed to policies pushed by the Republican Congress and Senate on issues ranging from the environment to education. Williams also confirmed the UAW filed a complaint with the National Labor Relations Board in Oakland, CA, over recent comments made on Twitter by Tesla founder and CEO Elon Musk (pictured at right).

“On May 20, 2018, Tesla, Inc., through its CEO Elon Musk, violated the National Labor Relations Act by threatening to take away employee stock options in retaliation for Tesla employees engaging in protected union activity,” the complaint says.

Specifically, Musk stated, “(n)othing stopping Tesla team at our car plant from voting union. Could do so (tomorrow) if they wanted but why pay union dues & give up stock options for nothing?”

This tweet went out to Musk’s 21.8 million Twitter followers, has been shared and republished by numerous individuals and media outlets, and remains publicly accessible at the time of the May 23 filing, the complaint says.

The UAW has conducted an organizing campaign among workers at the Tesla factory in Fremont, CA, over the past two years and has filed numerous other NLRB charges against the electric-vehicle manufacturer.

A Tesla spokesperson says in an e-mail to Agence France-Presse Musk was making a factual point about UAW contracts.

“Elon’s tweet was simply recognition of the fact that, unlike Tesla, we’re not aware of a single UAW-represented automaker that provides stock options or restricted stock units to their production employees, and UAW organizers have consistently dismissed the value of Tesla equity as part of our compensation package,” the spokesperson says.

Williams says a decision on when to hold a unionization vote at the Tesla plant will not be made until a new UAW president takes office later this year, according to a Reuters report.

Lawsuits Against UAW Spin Off From Corruption Case
Feb 02, 2018