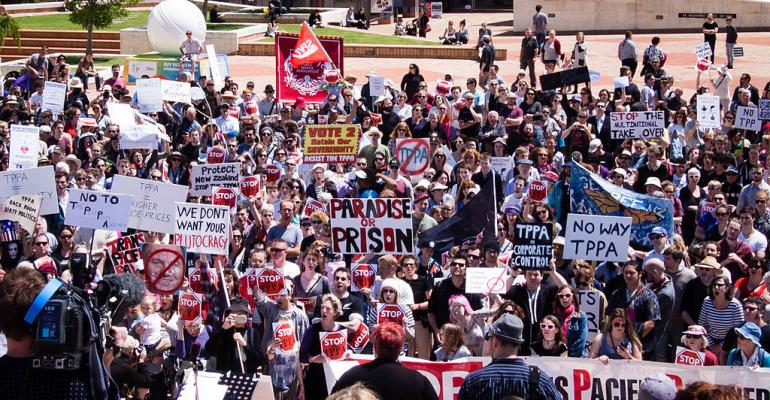 Now that Trump has withdrawn the U.S. from the Trans-Pacific Partnership, the auto industry faces other trade-policy challenges, particularly its attempts to strike bilateral deals one-on-one with many countries at once.

NEW YORK – Even as U.S. automakers applaud the official withdrawal of the U.S. from the Trans-Pacific Partnership, the focus is shifting to the bilateral trade deals President Trump has promised will take its place.

The rejected trade agreement is meant to eliminate tariffs between the U.S., Canada, Mexico, Australia, Japan, Malaysia, Vietnam, New Zealand, Brunei, Singapore, Peru and Chile. But the U.S. auto industry expressed concern that the benefits derived from opening these markets would be outweighed by what it views as Japan’s unfair currency practices.

“The U.S. auto industry has made clear that currency manipulation is a significant trade barrier and the TPP failed to meaningfully address the issue,” Matt Blunt, president of the American Automotive Policy Council, a group representing FCA US, Ford and General Motors, tells WardsAuto. “We appreciate the president recognizing this issue and walking away from the TPP.”

At a meeting following Trump’s Jan. 23 executive order withdrawing from TPP, “We had a productive discussion with President Trump, Vice President Pence and their key staff about the impact policy has on the ability of U.S. auto manufacturers to continue to invest and create jobs in the United States and be competitive in the global marketplace,” Blunt says.

Now that the president has walked away from TPP, the auto industry faces other trade-policy challenges, particularly as the U.S. attempts to strike bilateral deals with many countries at once and on a one-on-one basis.

Some of these countries – such as Japan, Canada, Mexico and Australia – are signatories to the TPP.

“General Motors and Ford want to get into Australia, and U.S. automakers would like to see something negotiated, particularly with Japan,” says Chicago attorney Marjorie Loeb, former general counsel at FCA North America.

Another key venue for bilateral trade talks likely will be the United Kingdom, which is preparing to withdraw from the European Union following last summer’s so-called Brexit vote.

“Britain has stated it wants to negotiate a series of bilateral agreements to get it back to where it was” before Brexit, Loeb said.

But while the industry will be pushing to boost trade by harmonizing regulatory standards with the U.K., she says it may prove more difficult to negotiate with the EU as a whole – of which the U.K., for the time being, remains a part.

“Because of the way the EU is set up, there’s just an ease to doing it once” rather than negotiate separately with the U.K., Loeb says.

Industry analyst David Bailey, a professor at Aston Business School in Birmingham, England, warns a U.S.-U.K. bilateral trade deal for the motor industry would be possible only if non-tariff barriers between the two markets were removed first.

The U.K. follows the international vehicle regulations that are integrated into EU law and which differ significantly from American standards. Bailey believes regulatory differences add 25% to the cost of trading vehicles between the two countries.

“There could be benefits and it could open up new markets for Britain,” he says. “But there would have to be some harmonization of regulations – particularly in the fields of emissions and safety.”

The Society of Motor Manufacturers and Traders, a U.K. industry group, notes deliveries of U.K.-built vehicles to the U.S. climbed 47.2% year-on-year, to 196,127.

“It is vital we maintain open trade links with the U.S. for the benefit of consumers and the industry worldwide,” says Mike Hawes, chief executive of the industry group.

Overshadowing concerns about Europe will be the emergence of new bilateral trade deals within North America itself. Besides seeing the collapse of TPP, Mexico and Canada face additional uncertainty as the Trump Admin. begins what it calls a renegotiation of NAFTA.

With everything from the location of factories to the prospect of tariffs within NAFTA itself, much more is at stake for the U.S. auto industry closer to home.

“You want to get production closer to markets,” Loeb says.

Even though the industry has a wish list for places such as Japan and the U.K., much more is riding on the two NAFTA partners, with which the U.S. already has an extensive free-trade area and the advantage of proximity.

“Let’s face it, the Atlantic is a formidable barrier,” Loeb says.

“The geography, frankly, is quite different when you compare (trade deals with the EU and U.K.) to NAFTA,” she says of the “huge mess” of trade turmoil that could follow a NAFTA sequel to Trump’s TPP action.

– with Andrew Burnyeat in Brighton, England