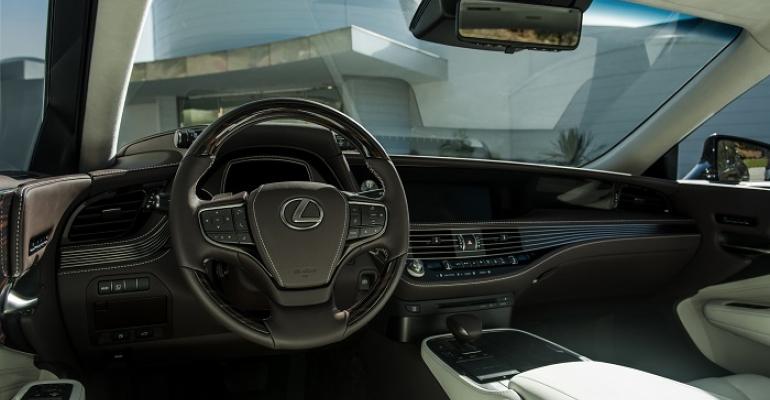 A top Toyota safety official says putting autonomous technology in base grades of less-expensive models is a way to keep self-driving vehicles within reach of mass-market buyers.

DETROIT – Various groups predict self-driving technologies will add thousands, perhaps even tens of thousands, of dollars to the price of a new vehicle.

But Kiyotaka Ise, chief safety technology officer and senior managing officer-Toyota, tells WardsAuto it is important the costs that currently make up the price of a vehicle be balanced against the cost of self-driving technologies, at least on lower-priced models.

“(Corolla) buyers have a certain value they see in the vehicle and also they have some expectations for the design and interior quality,” he says. “Their expectation of adding more cost…having that vehicle as an automated vehicle, will be a little bit difficult to sell.”

In his opinion, Level 5 autonomous technologies (those that make a human unnecessary for the operation of a vehicle) on the Corolla compact car could be paired with a more basic trim package to offset price.

“If the drivers or the consumers are not really thinking anything more in terms of the design or interior quality…they’re just looking at it as a means to transport itself from one place to another, then from the total vehicle value standpoint, we might be able to, let’s say, invest $10,000 for that technology, and then (in) the vehicle itself another $15,000.”

Most industry watchers expect self-driving technologies will start out, as have all advanced technologies, as something available only on luxury vehicles. However, like most new technologies they eventually will filter down into mass-market brands.

The ’17 Corolla in the U.S. ranges from $18,500 to just under $23,000, but by the time Level 5 autonomous technology takes hold inflation likely will have increased vehicle pricing.

Ise predicts it will be 2045 before autonomous vehicles with Level 5 technology make up at least half of vehicles on the road, although he personally believes it could be earlier than that.

Urban driving presents a challenge to it and other automakers.

“Most of the time the conditions are the same (on highways)…(and) from that standpoint we are aiming to go the Level 4 or Level 5 automated vehicles,” he says. “But then when it comes down to the urban areas there are so many variances among the different cities.”

Toyota wants to have Level 4 (slight human intervention necessary) autonomous vehicles, those able to tackle city streets, ready by the 2020 Tokyo Olympics per Japanese government wishes. However, Ise says it will be for demonstration purposes rather than commercial application.

The No.1 Japanese automaker has been hesitant to use the phrase autonomous or automated in regard to vehicles, as it doesn’t want to give consumers the wrong impression about the capabilities of current or near-future technologies. What’s available today and in the next few years, such as assistive steering like the upcoming ’18 Lexus LS’s CoDrive, really are semi-autonomous technologies and still require driver attention and intervention.

“At the Level 2 we still make sure the driver is in control of the vehicle, paying attention and not distracted and not taking their hands off the steering wheel,” he says. “When we get to Level 4 or Level 5, that will be something that we can call ‘automated vehicles.’”

To Toyota, a sufficient definition of Level 3 doesn’t exist, he says, so the automaker will skip ahead to Levels 4 and 5.

From 2011-2016, the CSRC, located in Ann Arbor, MI, did 44 research projects, with partners ranging from those in the field of pediatric trauma to computer science.

Regarding the former, Toyota partnered with Wayne State University in Detroit to develop “human body finite-element models for children and older people” to see how injuries in a vehicle collision can be reduced in those age groups.

The human-body model of a 10-year-old child developed from the partnership was one of the first worldwide and “includes internal organs,” Chuck Gulash, director-CSRC, tells WardsAuto. “Academics and others around the world have downloaded that and started to use it, not only in automotive applications but also playground applications.”

In the 2020s, CSRC is planning new research into how people establish mental expectations and determining future risk-taking in vehicles, behaviors not yet forecasted.

Ise says an area of safety research Toyota in Japan closely is exploring is how to reduce crashes by seniors who mistake the accelerator for the brake pedal. Moving brake and accelerator pedals farther apart or going to a hand-controlled accelerator are two possible ideas to solve the issue.

Also, Seigo Kuzumaki, chief safety technology officer secretary-Toyota, says sonar with a greater distance reach could detect objects such as a building or another car, so even if the driver mistakenly accelerates the vehicle automatically will hit the brake.