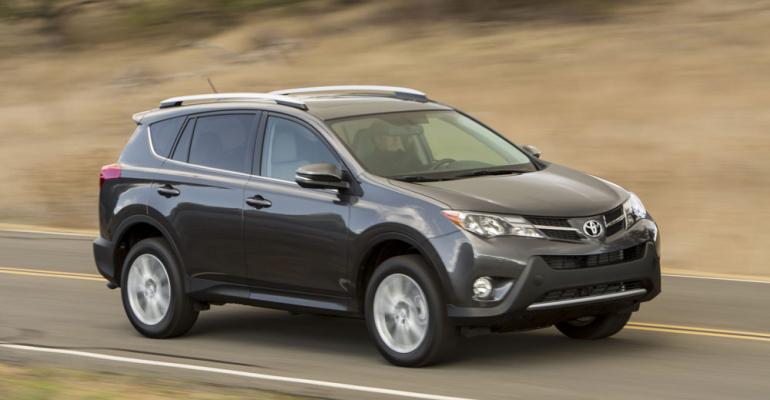 Core Toyota cars posted declines in April, including Camry, which was usurped by Honda&rsquo;s Accord.

Toyota delivered 176,160 vehicles in April, down 5.0% on a daily basis from like-2012, as many of the auto maker’s top-selling models faltered and sales to fleet customers were cut sharply from year-ago.

Also down for the third consecutive month was the subcompact Prius C, which fell 16.9% below April 2012 levels. The low-volume plug-in Prius took the biggest plunge of all the hybrid’s models, down 65.2% on 599 units sold.

Toyota’s best-selling car, the Camry, also stumbled in April, sliding 29.0% in hybrid form and 15.7% for the conventional model.

Nissan’s Altima outsold the Camry in March, but in April it was the Honda Accord that topped the Toyota, 33,538 units to the Camry’s 31,710.

Light trucks remained a strong segment for the No.1 Japanese auto maker in April.

“Two stories seem to stand out to us: Retail sales continue to show growth and the industry is having another very solid truck sales month,” Bill Fay, group vice president-Toyota Div., tells media today during a conference call to discuss April results.

Almost all Toyota-brand light trucks enjoyed increased sales in April, namely the new-for-’13 RAV4 cross/utility vehicle, which posted a 16.7% spike, not including the all-electric model that tallied 70 sales.

Demand for the Tacoma rose 14.2% in April. With a 21.9% increase through the first four months, the midsize pickup is one of Toyota’s best-performing models so far this year.

At Lexus, it was cars, not light trucks, driving growth. Thanks to another strong month for the new-for-’13 ES, Lexus car sales gained 2.0% over April 2012.

The ES lineup, which includes the gas-only 350 and hybrid 300 models, jumped 24.2% from year-ago, offsetting declines of the CT 200h hybrid hatchback and IS and GS 350 sedans.

Most Lexus truck models were flat or declined. Only the RX 350 CUV posted an increase, up 1.2%, while sales of the RX 450h and GX and LX SUVs fell.

The Scion youth brand continues to falter, down 0.6% in April.

The FR-S sports car remained the Scion volume leader in April, with 1,629 units sold, while all other models posted declines.

“We’re at a very good place from an inventory standpoint” and well-positioned to have a great May, Fay says.

Incentives vary regionally across the U.S. According to buyatoyota.com, the official website of Toyota U.S. dealers, metro-Detroit customers can lease a ’13 Camry SE for $199 month for 36 months, with $2,499 due at signing.