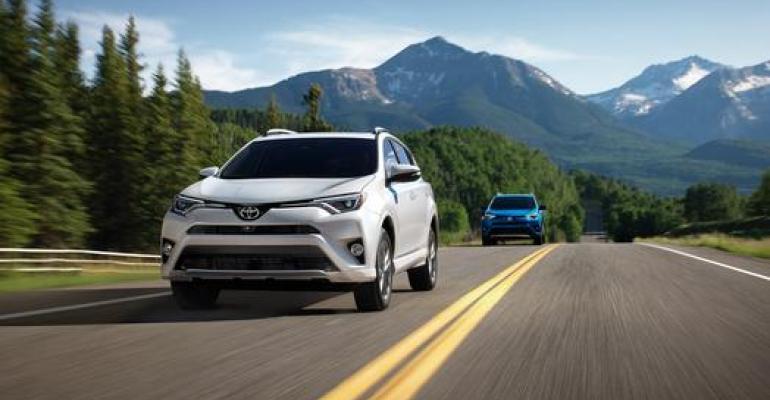 Despite the decline, the automaker’s 223,055 August deliveries were good enough to exceed Ford’s 212,393 sales in the U.S. last month, Wards Intelligence data shows.

Lexus accounted for the majority of Toyota’s August loss, with sales down 7.0% as the luxury brand’s lineup of passenger cars continues to slump given Americans’ growing fondness for pickups and utility vehicles. Last month, Lexus and Toyota both recorded best-ever light-truck results, they say.

Overall, Lexus cars fell 19.7%, Toyota says, with every nameplate down save for the new LS. The flagship sedan rose 123.5% on 923 deliveries last month.

Slumping car sales were the culprit in Toyota’s loss, as well.

Only the low-volume Mirai hydrogen fuel-cell sedan, up 65.7%, and the new Corolla iM hatchback, up 44.2%, registered gains. Every other Toyota car nameplate was in the red, including the year-old Camry midsize sedan, whose deliveries fell 18.6% to 30,141 units.

The RAV4 once again easily outsold the Camry, with 42,222 sales for the midsize CUV in August. However, that volume represented a 2.4% decline from year-ago.

Likely reflecting its age and the segment falling out of favor among vehicle buyers, sales of the Sienna minivan fell 34.7%.

Acura says the RDX’s total is its best-ever for the month of August, while the automaker credits the refreshed MDX’s new A-Spec package for boosting that CUV’s sales.

Other than the low-volume RLX midsize sedan, all other Acura cars declined in August.

At Honda, a 17.1% rise in light-truck sales couldn’t quite offset the 14.9% decline in car deliveries.

The Civic compact lineup suffered a 24.0% drop last month and sales of the Accord midsize sedan fell 11.0%. Fit subcompact sales were nearly half August 2017’s tally.

Honda touts it sold more than 5,000 electrified vehicles for the second month in a row, with the new Insight selling 2,212 units and the Clarity lineup tallying 1,689 last month.

Despite America’s love affair with the light truck, Honda points to supply constraints as being the reason for the decline with some of its car nameplates.

On the light-truck side, the CR-V midsize CUV continues to easily outsell the Accord and Civic, with 34,610 CR-Vs delivered last month, up 11.8% from August 2017.

At odds with the Sienna’s loss is the Odyssey’s gain. Sales of the Honda minivan, redesigned last year, rose 13.5% last month and are up 5.1% for the year.

Ridgeline pickup sales rose 7.0% to 2,792, although for the year the Ridgeline remains in the red, down 14.8% on volume through August.

The Rogue lineup continues to sharply outsell every other Nissan nameplate, with 33,400 Rogue CUVs sold in August compared to 14,925 Altima sedans, its next closest competitor.

The Murano and Pathfinder CUVs posted hefty gains last month, as did the Titan fullsize pickup truck. The latter rose 32.4% to 4,661.