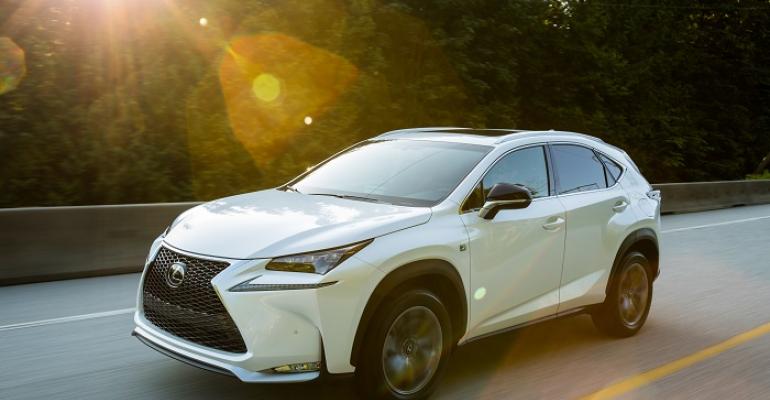 Both Toyota and Lexus gains were driven by strong CUV sales, including those of the RAV4, up 33.0%, and Lexus NX, which added 3,633 units to the brand&rsquo;s March total.

Toyota sales rose 9.1% on daily-selling-rate basis in March, with the automaker, as it had in January and February, crediting strong light truck sales for the gain.

The Tacoma compact pickup increased 21.2% while the larger Tundra grew sales on a DSR basis by 14.4%.

While light trucks were the major story for Toyota in March, cars performed well, too.

The subcompact Yaris, surprisingly, had the biggest jump among any Toyota nameplate, up 45.1%. The Corolla (up 24.5%) and Camry (up 1.1%) sedans also were in positive territory.

However, not all cars did well, as the Avalon large sedan fell 17.4% and the Prius hybrid continued to slide, with the liftback and V wagon models down 12.9% combined.

The new NX compact CUV continues to sizzle, with 3,633 sales last month, making it Lexus’ No.4 best-seller after the larger RX CUV, ES sedan and IS sedan.

Cars didn’t fare as well as utility vehicles for the luxury marque, as the ES and IS saw declines of 11.5% and 4.6%, respectively.

The bleeding continued at the Scion brand, which posted a 22.2% falloff last month as all models save for the xB, up 6.8%, slipped into the red.