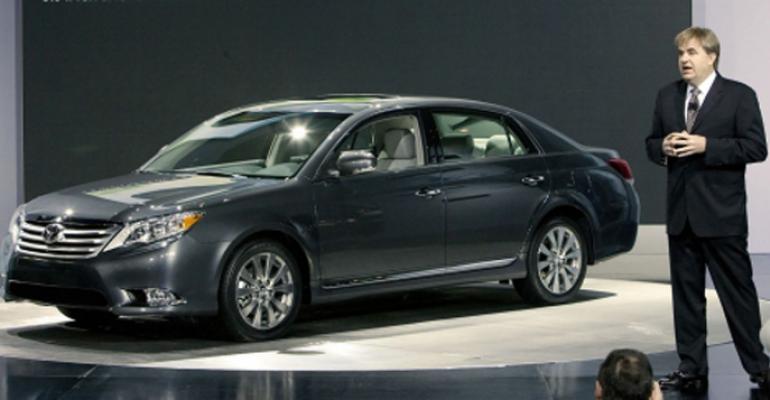 The auto maker has no long-range plan to become No.1 in North America, Senior Vice President Bob Carter says, citing its unwillingness to pump up fleet sales. But he would &ldquo;love to be No.1&rdquo; in retail deliveries.

“We're optimistic about 2013,” Carter tells the 2013 Automotive Forum, presented by the National Automobile Dealers Assn. and J.D. Power and Associates. “We expect combined Toyota, Scion and Lexus sales to increase to over 2.2 million vehicles.”

Carter notes Toyota is on track to hit that number, with sales so far this year running 14.1% ahead of like-2012.

But the executive says being the No.1 seller in the North American market is not part of Toyota’s long-range plans. The auto maker won’t chase fleet sales, Carter says, adding he would “love to be No.1” in the retail market, however.

Toyota is seeking a quicker response to market developments by aligning its sales, service, marketing, customer initiatives, vehicle distribution and parts operations for all three of its divisions.

“I have been given the responsibility to make sure we're one well-oiled machine,” Carter says here on the eve of the media opening of the New York auto show. “We have a much stronger focus on our customers and communities than ever before.”

The Toyota executive admits there are rumblings of distrust among consumers over industry claims regarding vehicle fuel economy, tow ratings and safety, and says the auto maker is keeping this in mind as it seeks to safeguard its reputation long-term.

“With great products coming from all manufacturers and working together to earn the trust of our customers, we will gain credibility, respect and business from consumers everywhere,” he says. “In short, we all have a very bright future ahead. We just need to make sure we do the right things for our customers and put their needs before our own.”