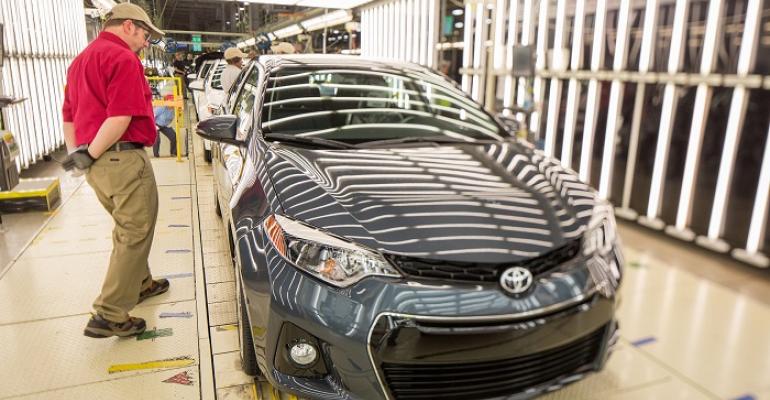 Toyota Latest, Not Last to Expand Small-Car Production in Mexico

Toyota confirms it will open a new, 200,000-unit annual capacity vehicle assembly plant in Guanajuato, Mexico, for the Corolla compact car in 2019.

The Mexican production will replace production in Ontario, Canada, which has become too expensive a locale to assemble notoriously profit-slim small cars.

Toyota says its plants in Cambridge, ON, longtime home of Corolla production for North America, and in Woodstock, ON, will receive investment over the next several years to assemble “midsized, higher-value vehicles.”

“Our next-generation production facility in Mexico will be a model for the future of global manufacturing and set a new standard for innovation and excellence,” Toyota Motor North America CEO Jim Lentz says in a statement. “Transforming our Canadian vehicle assembly plants is an equally important part of our strategic plan to position the North America region for sustainable long-term growth.”

The $1 billion Guanajuato plant will employ 2,000 workers and will be Toyota’s first to be built since it implemented its new Toyota New Global Architecture, which aims to group production by common vehicle platforms.

Toyota is the latest, but won’t be the last automaker to announce expanded production of small vehicles in Mexico, forecasts WardsAuto.

Several other manufacturers are expected to announce new capacity for B- and C-cars south of the border.

Unnamed small CUVs from General Motors, FCA US and Nissan are slated for production in the country, WardsAuto forecasts, including models for the Jeep and Nissan brands in 2016 and the GMC brand in 2018.

The Toyota Yaris subcompact car and its platform mate, the Scion iA sedan, also are slated for production in Mexico, as is the Kia Rio B-car in 2017, at a new 300,000-unit plant the Korean automaker is to open late next year near Monterrey.

Honda has just begun building its new HR-V small CUV at a new plant in Celaya, which opened last year with output of the third-generation Fit subcompact car.

GM recently confirmed WardsAuto’s forecast of additional builds of the Chevrolet Cruze in Mexico in 2016.

Mazda2 and Mazda3 B- and C-car production already is under way at Mazda’s new Salamanca, Mexico, plant that opened in 2014.

Ford is expected to announce April 17 it will establish new transmission and engine capacity in Mexico, beating out Canada for the work. Kia sister brand Hyundai also is said to be eyeing its first plant in the country.

The Guanajuato plant will be Toyota’s 15th in North America and the first new vehicle-assembly plant for the automaker in the region since the Blue Springs, MS, facility opened in 2011. Blue Springs also assembles the Corolla for North America, a situation not changing with production in Mexico.

Toyota says Guanajuato will begin producing the Corolla for the ’20 model year and “leverage the existing robust supply base and transportation infrastructure in the region.”

While Toyota is a relative newcomer to Mexico, rivals Volkswagen and Nissan have been assembling vehicles in the country since the 1960s. Ford, GM and FCA also have longtime operations there.

Toyota has only one plant in Mexico, a relatively small operation in Baja California that broke ground in 2003 and assembles the Tacoma compact pickup and Tacoma truck beds.

Toyota says Baja has an annual capacity for 200,000 for truck beds.