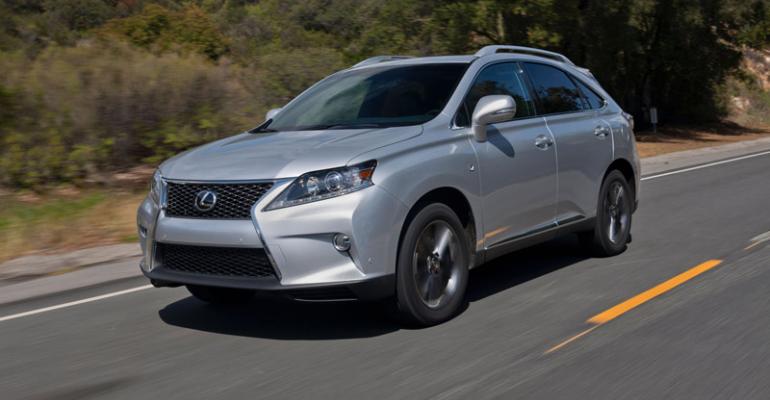 The Japanese auto maker projects U.S. industry sales of 14.7 million light vehicles in 2013 and 2.15 million cumulatively for its three brands.

While last month’s gain was one of Toyota’s smallest year-on-year increases of 2012, the auto maker still delivered more than 2 million units, marking the first time since 2008 it has achieved that feat, WardsAuto data shows.

“We begin 2013 as a company and an industry with a great deal of anticipation and expectation, and continued strong consumer response to our new products,” Toyota U.S. CEO Jim Lentz tells media in a conference call today.

While challenges remain, the U.S. economy is on much better footing than it has been in recent years, with declining unemployment, rising home prices and the average age of U.S. vehicles hitting 11 years, Lentz says.

Still, Toyota’s U.S. light-vehicle sales projection for 2013 is more conservative than those of some competitors, at 14.7 million.

For the auto maker itself, Lentz predicts deliveries of 2.15 million units in 2013, thanks to continued growth from products introduced in 2012, such as the Toyota Avalon large sedan and vehicles set to launch in 2013. On tap this year are nine new or updated models, including the next-generation Lexus IS and Scion tC.

The Toyota brand saw its stalwart models drive growth last year, including the Camry, which despite an 11.7% drop in sales of the gasoline-engine-only version in December surpassed 400,000 units for the first time in four years.

Lentz does not yet have a projection for 2013 Prius sales, but he expects continued growth and notes Toyota’s continued dominance of the hybrid segment. Some 70% of hybrids delivered in the U.S. last year were produced by the auto maker.

On the light-truck side, the RAV4 cross/utility vehicle was Toyota’s best-selling model, with 171,685 units delivered in 2012, not including 192 electric RAV4s.

Lexus’ total 2012 sales were not enough to push the brand past BMW to reclaim the title of No.1-selling luxury brand in the U.S. BMW edged out Lexus by nearly 40,000 units with 281,460 deliveries, not including the Mini brand.

Despite the sales decline of many Lexus nameplates, including the IS and LS, Lexus sold 31.2% more cars last year than in 2011. Deliveries were led by the redesigned GS and ES, although the latter still sold at half the rate of BMW’s 3-Series midsize luxury sedan.

Lentz says Toyota was the No.1 retail brand in the U.S. for 2012. Fleet sales accounted for less than 10% of the auto maker’s total sales in the year.