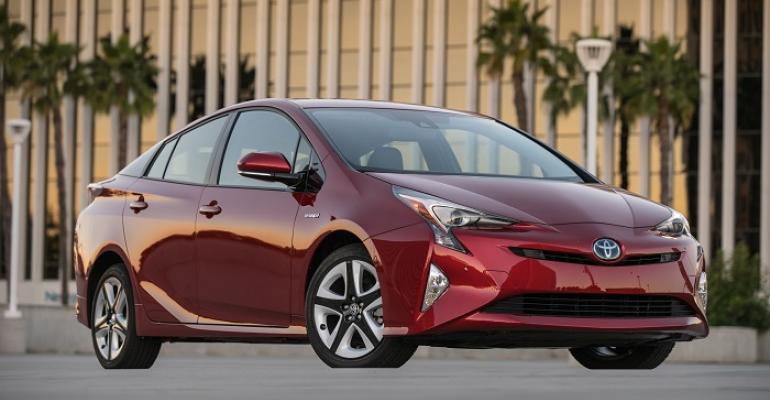 Toyota: Down Sales for Prius, Upside for RAV4 Hybrid

Toyota targets fewer Prius sales this year than last, while the RAV4 Hybrid could be hotter in 2017.

“We’re going to follow the market, but we think we have the supply-and-demand (equation) pretty much dialed in,” Bob Carter, senior vice president-automotive operations for Toyota Motor Sales U.S.A. tells WardsAuto in an interview here.

Toyota once projected it could sell 400,000 Priuses of various body styles and powertrains in a calendar year, but that was before the CUV craze took hold.

“What we’re seeing is the movement from a 3-box sedan to 2-box utility (vehicle) is also happening in the hybrid market,” Carter says.

The No.1 Japanese automaker launched a new generation of the Prius liftback early last year, but unlike previous generations of redesigned liftbacks, this one didn’t spike sales.

While a source told WardsAuto last year Toyota was flummoxed by the car’s falloff, and Carter says he wasn’t surprised, given low gasoline prices across the U.S. and the growing consumer preference for utility vehicles, Toyota did call for a 30% increase in Prius liftback sales heading into 2016.

However, he believes having the RAV4 Hybrid in the lineup helped retain Toyota customers.

“I was glad to have that vehicle, because people were coming out of (the) Prius, preferred a utility body, and here’s a vehicle that provides almost the same benefits, but with a utility body. The timing was almost impeccable for it.”

Toyota could have sold more than the 45,097 RAV4 Hybrids delivered last year, he says.

And with the automaker now in a better supply situation, it expects to top 2016’s tally this year.

“We got to a good stocking level very late in the year, but most of the year that (model) was supply-restricted. It came in at about 13% of the mix, and it should be a little higher than that,” Carter says of the proportion of RAV4 Hybrid sales to total sales of the RAV4.

Supplies of all RAV4 variants were restricted in 2016, but the situation has been remedied with raised production levels, Carter says.

WardsAuto inventory data shows a 38-day supply of North American-built RAV4s, including the hybrid, and a 50-day supply of imported RAV4s, in late December.

While that’s pretty lean, considering the industry-average days’ supply for light trucks last month was 58, he says the CUV’s inventory is “in good shape. I talk to the dealers and they say, ‘I could use a little bit more, but I’m OK, I’m not missing any business.’”

Toyota is forecasting a flat 2017. Its U.S. sales last year fell 2.0% to 2.4 million, as it couldn't keep up with light-truck demand and car sales declined.

“Overall you’ll see our volumes come in similar this year to last year, but the mix will continue to evolve (toward light trucks vs. cars),” Carter says. “I don’t think the movement to light trucks and CUVs is over, but the rate of growth will slow.”