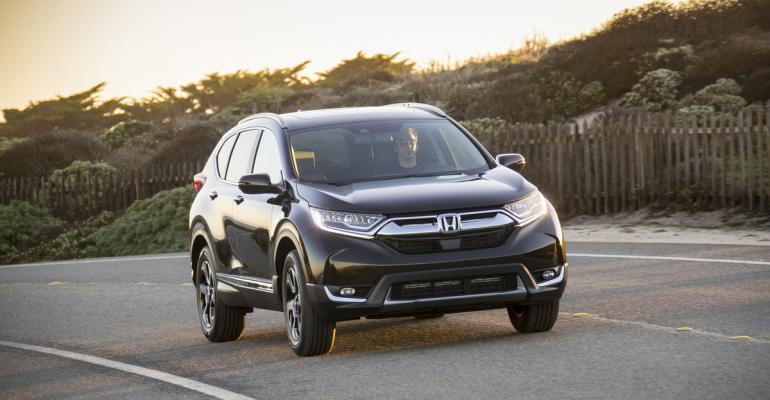 CR-V sales up for Honda in January, top RAV4.
Industry

Light-truck losses at both Toyota and Nissan were in addition to declines in their car columns, while strong CR-V sales lifted Honda’s light-truck results.

Toyota started off 2019 with a sales dip, losing ground in both light trucks and cars.

The No. 1 Japanese automaker registered 6.6% fewer U.S. light-vehicle sales in January 2019 than in January 2018. There were the same number of selling days, 25, in both months.

The luxury Lexus brand posted a 7.2% increase in cars, tempering a 6.6% loss in utility sales.

The Yaris iA liftback variant is being discontinued and lost 100% of its year-ago volume and the Avalon large sedan fell 46.6% despite a redesign for the ’19 model year.

While Toyota saw its biggest light-truck losses from aging models, such as the Sienna minivan (-41.8%) and the Land Cruiser large SUV (-55.3%), higher-volume models also dipped.

The brand’s best-selling vehicle, the RAV4 compact CUV, fell 8.1% to 24,505, likely due to the sell-down of its current generation and launch of the new ’20 model.

The Highlander midsize CUV also fell last month, down 6.9% from its January 2018 volume.

The only car model to rise was the Corolla, up 17.3% due to gains in both sedan and hatchback body styles. Toyota soon will debut a new-generation Corolla sedan; last year it launched a next-gen hatchback variant.

The 4Runner SUV and C-HR small CUV were the only Toyota utilities posting increases last month, while the Tacoma midsize pickup was flat, up 0.8% (although with 16,852 deliveries Toyota said it was best-ever January for the truck). Toyota will debut a refreshed Tacoma for the ’20 model year next week at the Chicago auto show.

The bulk of Lexus’ car increase came from the ES midsize sedan, redesigned last year and up 19.1% in January. The lower-volume RC midsize sports coupe also gained, up 62.7%.

The brand’s biggest percentage increase was posted by the LS large sedan. Redesigned in 2017, Lexus delivered 508 last month vs. 116 in January 2018.

All Lexus utility vehicles lost ground from year-ago, with the low-volume LX large SUV dipping the most (-31.0%) and the brand’s best-selling model, the midsize RX CUV, falling 18.3%.

The NX compact CUV and the GX midsize SUV were down 5.0%, while the brand sold 791 of the all-new UX small CUV.

Meanwhile, American Honda saw a 1.5% increase to start the year off, despite record cold temperatures in the East and Midwest that it says kept buyers at home the last week of the month.

Honda Div. set record light-truck sales in many months of 2018 and started off 2019 the same way. The brand delivered 51,598 light trucks last month, an all-time best tally for a January it says and up 2.4% from year-ago.

The CR-V’s performance was in contrast to all other Honda-brand light trucks posting declines, including the Pilot midsize CUV, down 26.4% from its year-ago volume.

Other gaining Hondas included the Accord midsize sedan (6.3%) and the Clarity green car lineup (49.0%).

MDX large CUV deliveries were flat, with the same sales (2,968) as year-ago, while the ILX entry-level car gained 22.7%.

The TLX midsize sedan experienced the biggest drop, down 22.6%.

Nissan’s car losses ranged from -8.3% for the Versa subcompact to -39.6% for the Altima midsize sedan, the latter redesigned last year.

On the truck side, only the Frontier midsize pickup and NV commercial vans were in positive territory, up 2.7% and 23.5%, respectively.