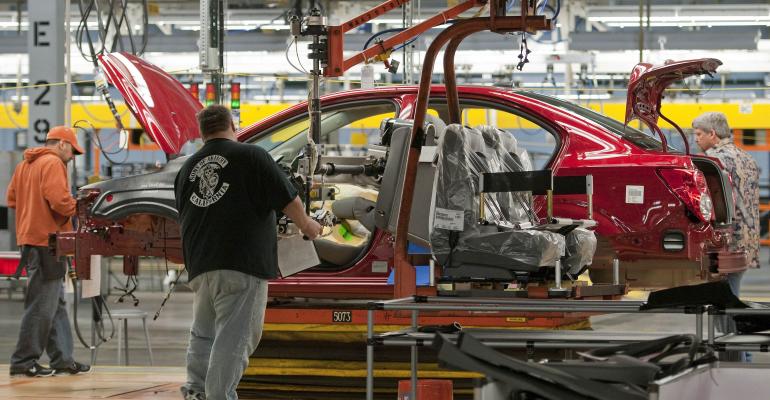 The third-tier workers get about $11 per hour and receive only minimal health care benefits and no pensions. They handle preassembly work of sorting and sequencing parts from outside suppliers.

While the United Auto Workers’ two-tier wage contracts with General Motors, Ford and Chrysler gather attention, the union has allowed a third wage tier to gain a foothold at GM plants in Lansing, Hamtramck and Brownstown and Orion Township, MI.

All the third-tier workers get about $11 per hour and are entitled to only minimal health care benefits but no pensions. They handle preassembly work of sorting and sequencing parts from outside suppliers, many of whom are located overseas or a long distance from GM assembly centers.  The work once was done off-site by contractors.

The third-tier workers at Brownstown assemble the battery packs used in the Chevrolet Volt and Cadillac ELR extended-range electric vehicles.

GM is preparing to introduce the next-generation Volt at the Hamtramck plant and plans to build the Chevrolet Bolt EREV at Orion. But a UAW official asking not to be named says preparations for assembly of the Bolt at Orion are not yet under way.

Orion has been the center of the third-tier activity since 2009 when UAW officials led by then-President Ron Gettelfinger agreed to a separate labor contract at the suburban Detroit factory to encourage GM to build a small car there.

Part of the deal allowed GM to bring in an outside contractor employing workers receiving the third-tier wage at the Orion plant.

The three-tier arrangement, however, created friction inside the facility and a confrontation arose in November 2011 when contractor running the sequencing center at the Orion plant rebuffed the UAW’s calls to give the 80 employees assigned to the center a raise from $9 per hour.

The contractor, Logistics Insight (LINC), is a subsidiary of Warren, MI-based CenTra, whose CEO is Manuel “Matty” Moroun. CenTra controls the Ambassador Bridge linking Detroit with Windsor, ON, Canada.

The agreement with LINC eventually proved unworkable and GM agreed to hire the LINC workers. But while they now are GM employees, they remain covered by the third-tier contract negotiated in 2011.

Three-tier contracts now are in place at GM plants in Lansing in addition to the Orion, Hamtramck and Browntown facilities, according to a UAW official familiar with the agreements. One recent change in the Hamtramck contract, which the union wants to see adopted elsewhere, is that the third-tier workers now are eligible to move to openings at the second tier, which pays a higher wage, he adds.

“It creates a path for them,” the official says.

The Orion plant is considered a showplace because GM moved production of the subcompact Sonic from South Korea to the U.S. following concessions by the UAW. The Buick Verano compact sedan also is built at the plant but GM recently has slowed production of both cars as sales have dropped along with gasoline prices.

Nevertheless, the Orion plant is the only plant in the U.S. building any kind of subcompact model.

The Sonic’s build hinges on the relatively low production costs in the Orion plant, which also has been re-equipped with a flexible automation system and uses methane gas from a nearby landfill to power its boilers and generate electricity. The plant’s local labor contract has been reconfigured and it uses a larger number of second-tier workers who make roughly $16 per hour under the UAW's current labor agreement, compared to the $28 per hour paid long-term workers.

While decrying the multi-tier wage system in place at GM, Ford and Chrysler, UAW President Dennis Williams says he is willing to discuss three-tier arrangements provided the automakers  bring new work into union plants. At the same time, the union is now actively lobbying to have the federal minimum wage, currently $7.25 an hour, raised to at least $15 per hour.