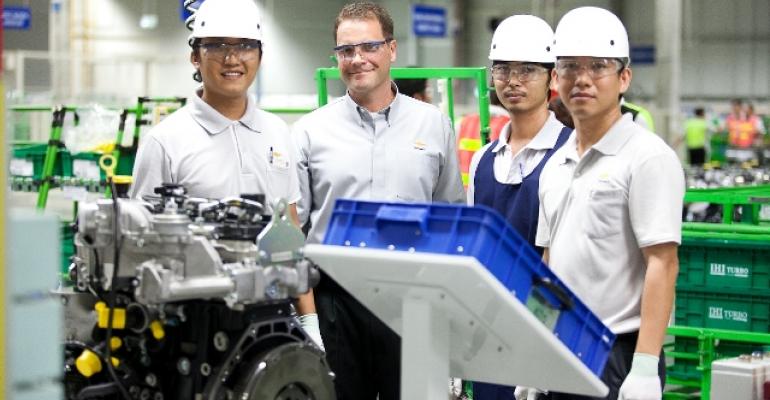 Engine shipments to North America from Rayong, Thailand, will start in the third quarter. Installation in the Colorado and Canyon at GM&rsquo;s plant in Wentzville, MO, will begin later this fall.

GM Thailand begins production of 2.8L Duramax 4-cyl. turbodiesel engines slated for export to North America for use in U.S. and Canadian versions of the Chevrolet Colorado and GMC Canyon midsize pickup trucks.

Speaking at the event to celebrate the start of production for the North American-bound engines, GM Thailand and Chevrolet Sales Thailand Managing Director Marcos Purty says exporting the engines to the U.S. increases the Thai output and improves GM Powertrain Thailand’s economies of scale.

Engine shipments from Rayong to North America will start in the third quarter. Installation in the Colorado and Canyon at GM’s plant in Wentzville, MO, will begin later this fall.

The 2.8L is based on the same Duramax installed in the Colorado pickup and Trailblazer SUV available in Thailand and the region, says Watcharin Sayamrattanakit, GM Powertrain Thailand manufacturing director.

“This is solid proof and recognition that our product, built right here in Thailand to the highest standards, is of world-class quality and good enough to be in demand in one of the most competitive and demanding automotive markets in the world,” Sayamrattanakit says in a statement.

U.S. and Canadian customers will get the second-generation Duramax engines, which were engineered in Europe and the U.S. Because of emissions requirements and operating conditions in the U.S. and Canada, the export Duramax 2.8L will produce 181 hp and 369 lb.-ft. (500 Nm) of torque.

The engine features a water-cooled, variable-geometry turbocharger and common-rail fuel delivery system capable of injection pressures of up to 29,000 psi (2,000 bar). It also features an electronic engine control module fully developed by GM.

A balance shaft counter-rotates to cancel out vibrations and enhance smoother and quieter operation at all engine speeds, GM says.

In addition to compliance with U.S. emission standards, the engine is Euro-4 compliant and can be upgraded to meet Euro-5 and Euro-6 standards.

The first-generation engine started regular production in Thailand in 2011. The second-generation was launched in 2013, and GM Powertrain Thailand builds both the 2.8L and 2.5L variants. The Australian and South American markets also receive the engines.