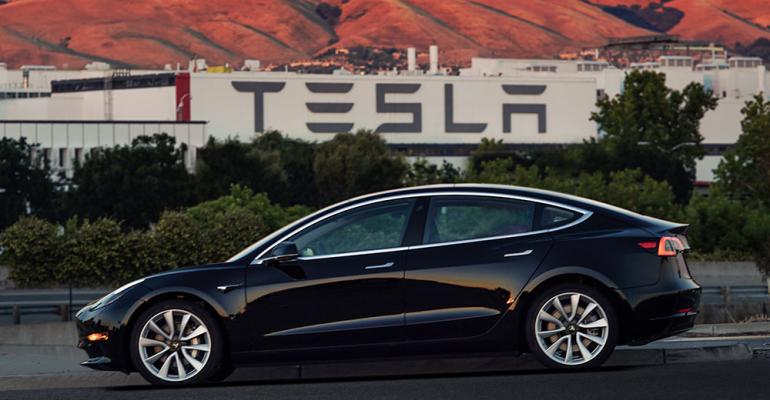 Tesla’s ‘Hiccups’: Devil in the Details

Tesla has little chance of hitting its 5,000 weekly output during the fourth quarter. The chief reason: Its current production line can&rsquo;t build vehicles at that rate unless it runs two 10-hour shifts seven days a week, which is unlikely.

CEO Elon Musk has said Tesla faces six months of “production hell” as it ramps up production of its much-awaited Model 3, but the devil may have arrived early.

Musk introduced the Model 3 on July 28 amid much hoopla at its Fremont, CA, assembly operations. Dressed casually and smiling broadly, Musk unveiled 30 Model 3s and said production would begin in August with 100 cars rolling off the line, rising to 1,500 in September and steeply upward to 20,000 in December.

In a statement, as reported by The Wall Street Journal, Tesla maintains, “It is important to emphasize that there are no fundamental issues with the Model 3 production supply chain. We understand what needs to be fixed, and we are confident of addressing the manufacturing bottleneck issues in the near term.”

The Model 3 represents Tesla’s drive to produce a less-expensive “mainstream” electric sedan priced around $35,000, before government subsidies, to supplement its far more expensive Model S sedan and Model X CUV. The automaker claims it has 455,000 Model 3 orders, each accompanied by a $1,000 deposit. Getting those cars to customers is vital to shoring up Tesla’s bottom line.

Based on numerous reports, Tesla has little chance of hitting its 5,000 weekly output during the fourth quarter and perhaps not for a long time after that.

The chief reason: Its current production line in Fremont, CA, can’t build vehicles at that rate unless it runs two 10-hour shifts seven days a week, which is not likely for an all-new vehicle, even if everything goes smoothly. The plant presently runs two 8-hour shifts five days a week.

A source in position to know says a second body shop mirroring Fremont’s would be required to support the high volume Musk has forecast. “I understand they’re talking about a second body shop,” he says, “but I can’t see them reaching 2,500 to 3,000 weekly until the end of next year” with current production facilities.

Tesla had a slow launch to full production for both the Model S and Model X, but Musk already is looking to add future SUVs and even pickups.

Knowledgeable sources say Tesla’s Model 3 launch has been hampered by all manner of problems, some self-inflicted because of Musk’s disdain for using development and production processes honed by traditional auto makers.

Most importantly, Tesla bypassed production prototyping typically used by auto makers to catch glitches before gearing up for high-volume output and instead sought to save time by using a “pilot line” to check out processes. “Using prototyping you can make changes and it doesn’t cost as much,” says one source. Business Insider reports that skipping prototyping “could spell trouble down the road.”

Another source, who has first-hand knowledge of the situation, says Tesla chose to use its own methods to prep for production rather than rely on traditional validation processes. “There have been a lot of hiccups,” the source says, “because everything they do is ass-backwards. They aren’t used to this kind of (high-volume) operation. There are no standards.”

Tesla is well aware it must build Model 3s with high quality to maintain what some describe as its “cult” following, even more so as U.S. customers turn increasingly from cars to SUVs and CUVs.

Then there’s the onslaught of electric vehicles coming from U.S., Chinese and European auto makers as well as upstart tech companies all pointing, as is Tesla, toward driverless, or autonomous, operation.

And what about those 260 Model 3s that dribbled out of Fremont in August and September? Tesla says they are salable, but sources say it’s likely most are in the hands of employees and others selected to evaluate them.

There are published reports indicating some of the cars have shown up with problems, such as missing windshield wipers.

Keeping them “in house,” so to speak, may be Tesla’s best short-term policy.