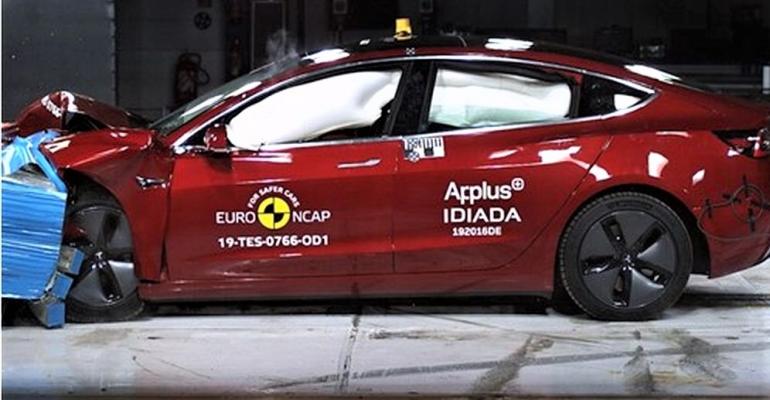 The Tesla’s 94% score in safety-assist tests is the best yet under Euro NCAP’s most recent protocol.

Tesla joins the ranks of vehicles with a five-star rating as its Model 3 wins the top safety mark from the European New Car Assessment Program.

After its latest crash tests, Europe NCAP gives the new Skoda Scala, the Mercedes-Benz B-Class and the latest GLE the same five stars.

The new Kia Ceed and DS 3 Crossback CUV rated four stars with equipment offered as standard, but both reach five-star territory when equipped with an optional safety pack.

Euro NCAP Secretary General Michiel van Ratingen says the Tesla Model 3 made a strong debut with a perfect score in the frontal offset deformable barrier crash test, a mainstay of Euro NCAP’s assessment since its inception in 1997.

He says its performance in the safety-assist tests particularly impressed, thanks to its driver-assistance systems such as lane support, speed assist and autonomous emergency braking.

The Tesla’s 94% score in safety-assist tests is the best yet under Euro NCAP’s most recent protocol.

Skoda’s Scala, positioned between consumer favorites Fabia and Octavia, achieves a 97% score in adult occupant protection. This puts the Scala among the top small-family cars tested by Euro NCAP for this part of the assessment, along with the Mercedes-Benz A-Class and Mazda 3.

Van Ratingen says Mercedes-Benz is continuing its winning streak with its 10th and 11th five-star result since 2014, demonstrating its safety reputation still is non-negotiable.

“Our tests get tougher and tougher, and cars continue to perform well, which means that car-buyers are getting an ever-safer range of vehicles to choose from,” van Ratingen says in a statement.

“Next year, we up the ante again, with better tests of driver-assistance systems, a completely new frontal crash test and more attention to protection in side crashes.  These new tests should help to make the roads safer for everyone.”